Money never sleeps. Neither does the marijuana industry. To profit from the cannabis revolution, you must stay up-to-date on the latest legislative, political, and regulatory developments. Here’s a roundup of this week’s significant news in the fast-moving world of cannabis.

National survey. A new poll released January 17 found that a majority of U.S. voters, including most Republicans, Democrats and independents, support legalizing marijuana at the federal level.

The survey, conducted by the research firm Data for Progress, found that 65% of Americans overall are in favor of federally legalizing cannabis.

Support for marijuana normalization is strikingly broad, with 75% of Democrats, 67% of independents, and 52% of Republicans agreeing that the federal ban on cannabis should be lifted.

The survey’s findings are in line with several previous polls that underscore the increasing popularity of marijuana with the public. The poll also showed support for social equity policies as they relate to cannabis entrepreneurs. 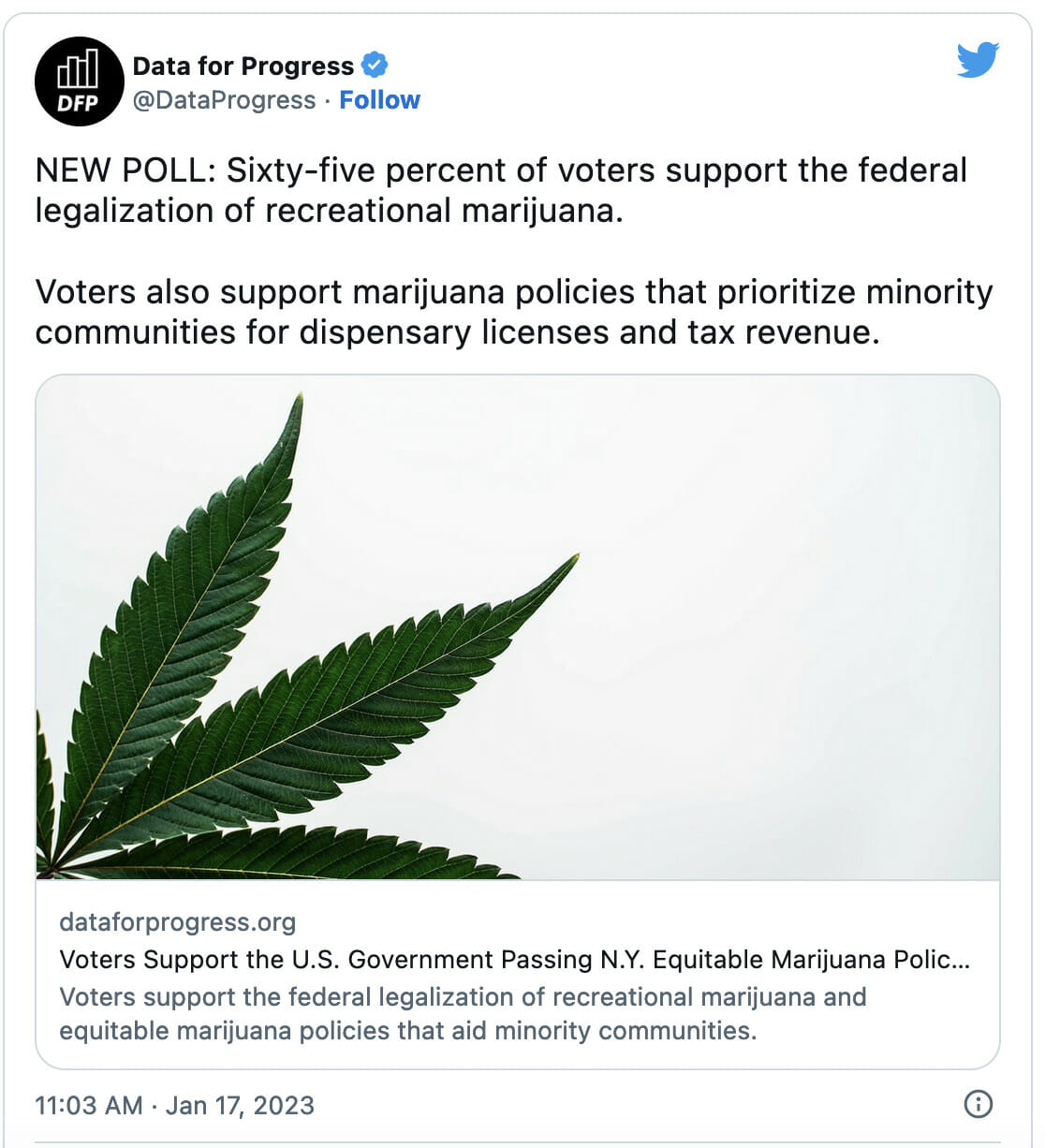 Several bills are pending in the 118th Congress to eliminate the federal ban on pot, but with ultraconservatives now in charge of the U.S. House, the chances of any of these bills getting passed are slim.

WATCH THIS VIDEO: Interview With a Top Financier Behind The “Green Rush”

Despite the opposition of pot-prohibitionists, marijuana business lobbyists continue to pressure Congress to reform marijuana laws. In the meantime, states, localities, and other jurisdictions are taking action.

U.S. Virgin Islands. On January 18, the governor of the U.S. Virgin Islands signed a pair of bills to legalize marijuana and expedite cannabis criminal expungements in the territory, making it the latest jurisdiction in the country to end prohibition.

“From the beginning of the Bryan-Roach Administration, we have worked towards the legalization of the adult use of cannabis, and today, with the hard work of the members of the 34th Legislature and prior Legislatures and the efforts of my team, we are finally here and finally signing into law the Virgin Islands Cannabis Use Act,” the governor stated

Congress. U.S. Rep. Greg Steube (R-FL) this week filed legislation designed to protect military veterans from losing federal government benefits for using medical marijuana in compliance with state law. This latest version is identical to the bill he introduced in the last session of Congress.

Department of Veterans Affairs (VA) physicians currently are allowed to discuss medical marijuana with patients and document their usage. Moreover, those patients already are protected by VA policy from losing their benefits for marijuana use. This bill would codify those agency guidelines into federal law.

Michigan. A state report released this week revealed that Michigan marijuana sales reached a record high in December. Medical cannabis purchases slightly dipped in the month, but the adult-use (i.e., recreational) market has more than made up for that decline, with total sales hitting $221.7 million last month. That level is roughly $9 million more than the previous record for adult-use sales set in September.

Most of the marijuana purchases derived from flower, followed by vape cartridges and infused edibles. “’Flower” refers to the smokeable, leafy part of a cannabis plant.

“I am here yet again, bringing one of the most conservative medical cannabis bills in the nation, in an attempt to bring patients in our state the care they deserve,” Wishart stated. “Growing evidence shows that this plant not only has medicinal values for reducing seizures and relieving pain, but it can help reduce the need for opioid use. It is long past time that Nebraskans have access to a far safer alternative medicine.”

Chances of the bill eventually becoming law in Nebraska, a deeply conservative state, are uncertain. Nebraska has decriminalized possession of small amounts of cannabis, punishing possession of up to one ounce with a $300 citation, but the sale of any amount of marijuana is still a felony that carries mandatory minimum prison sentences.

That said, an increasing number of states are getting aboard the legalization bandwagon. In the November 2022 midterm elections, pot legalization initiatives passed in Maryland and Missouri. Additional states are expected to follow suit in 2023. Stay tuned; I’ll keep you informed.

Editor’s Note: As I’ve just made clear, the marijuana industry is dynamic and rapidly expanding. Every portfolio should have exposure to cannabis-related companies. That’s why I’ve launched a service detailing how you can financially benefit from the consumer mainstreaming of weed.

Called Marijuana Profit Alert, my publication is your guide to reaping profits from the marijuana bonanza. Click here to learn more.