One Year Later: What Is China Trying to Tell Us Now?

Three years ago, the emergence of COVID-19 upended the global financial markets. At that time, nobody on Wall Street knew how much worse it would get or how long it might take for it to disappear.

I didn’t know either, so in April 2020 I created a tool to help me anticipate how the stock market would react to it. And since the source of the virus was China, I chose three businesses that derived nearly all of their revenue from economic activity in China as my guide.

I noticed at that time that both the C3S and the SPDR S&P 500 ETF (SPY) peaked on January 17 and troughed on March 23. However, over the following month the SPY rallied 28% compared to a gain of only 17% for the C3S.

Read This Story: Will China Go The Way of Japan?

Two years later, I revisited this topic to determine if the C3S was, in fact, a valid indicator for the U.S. stock market. And what I discovered is that the indices moved in unison until June 2021, at which time the C3S took a sudden downturn while the SPY kept heading higher. 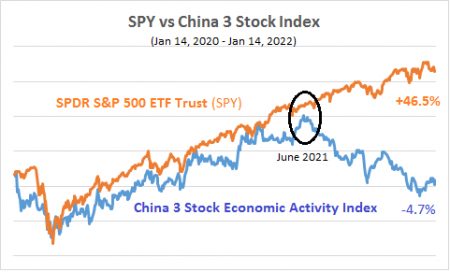 That prompted me to suggest an options trade known as a “straddle” based on the premise that the two indices would move back into parity over the following year. Since there are no options to trade on my C3S, I used the iShares MSCI China ETF (MCHI) as a proxy for it.

That means the options trade I recommended last year would have been quite profitable. But if you missed out on that trade, don’t despair. Now, I see something in the chart that offers another profit opportunity. 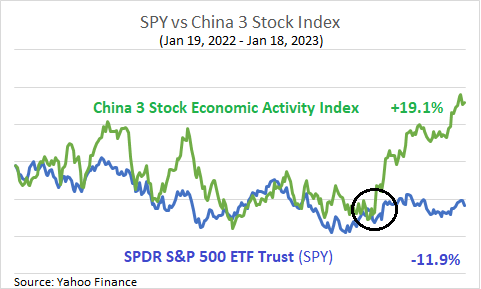 Three months ago, the SPY was slightly higher than the C3S (circled area in chart above). But since then, the C3S has shot higher while the SPY has eked out only a modest gain.

Once again, I am confronted by the same question I asked two years ago: What is China Trying to Tell Us? Except this time, the message appears to be that our stock market may be on the verge of a strong recovery.

If that turns out to be correct, then there are many ways to profit from it. A simple strategy would be to buy a call option on the SPY (call options increase in value when the price of the underlying security goes up).

If that’s too risky for you, there is another way to play it. Instead of buying a call option on the SPY, you could sell a put option on MCHI (a put option increases in value when the price of the underlying security goes down).

For example, last week while MCHI was trading at $53.50, the put option that expires on August 18 at the $55 strike price could be sold for $5.00. That money is yours to keep no matter what happens next.

If MCHI rises above the strike price over the next seven months, this option would expire worthless. In that case, you have no further obligation.

If MCHI is still below $55 at expiration, then this option will most likely be exercised and you would have to buy the stock at the price. However, your net price is only $50 since you got paid $5 to accept that risk.

And if you are feeling sassy, you could take the $5 premium you got for selling the MCHI put option and use it to buy a call option on the SPY. If the U.S. stock market follows China’s lead in the months to come, that trade could end up being quite profitable, too.

Of course, just the opposite could occur. If both MCHI and the SPY depreciate in the months to come, you would end up in a net negative position.

That’s a risk I’d be willing to take since MCHI should eventually recover. When that happens, I could recoup my original investment and walk away from this trade no worse for it.