How to Play The Rally

The political squabbling in the 118th Congress resembles the cafeteria food fight in Animal House. I’ve been covering politics since the Reagan era, and I’ve never seen such ignorance, mendacity, and extremism on display in Washington as I do today.

The debt ceiling impasse is only the latest, dispiriting example of dysfunction in our nation’s capital. Other risks to your portfolio include the Russia-Ukraine war, China’s slowing economy, and rising interest rates.

And yet, these headwinds will eventually dissipate. The death last week of one of my favorite rock stars, David Crosby, reminds me of this CSNY lyric: “The darkest hour is always, always just before the dawn.”

Investors should always be forward-looking. Keep your eye on the enduring technology megatrends, which I examine below. The tech “disruptors” will soon come to the fore again.

WATCH THIS VIDEO: The Narrative Shifts from Inflation to Growth

In 2022, the S&P 500 fell 19.4%, its worst year since 2008. But history shows that stocks rarely post back-to-back annual losses, and indeed, conditions seem ripe for the start of a new bull market in 2023. Inflation is cooling and the Federal Reserve will eventually ease up. 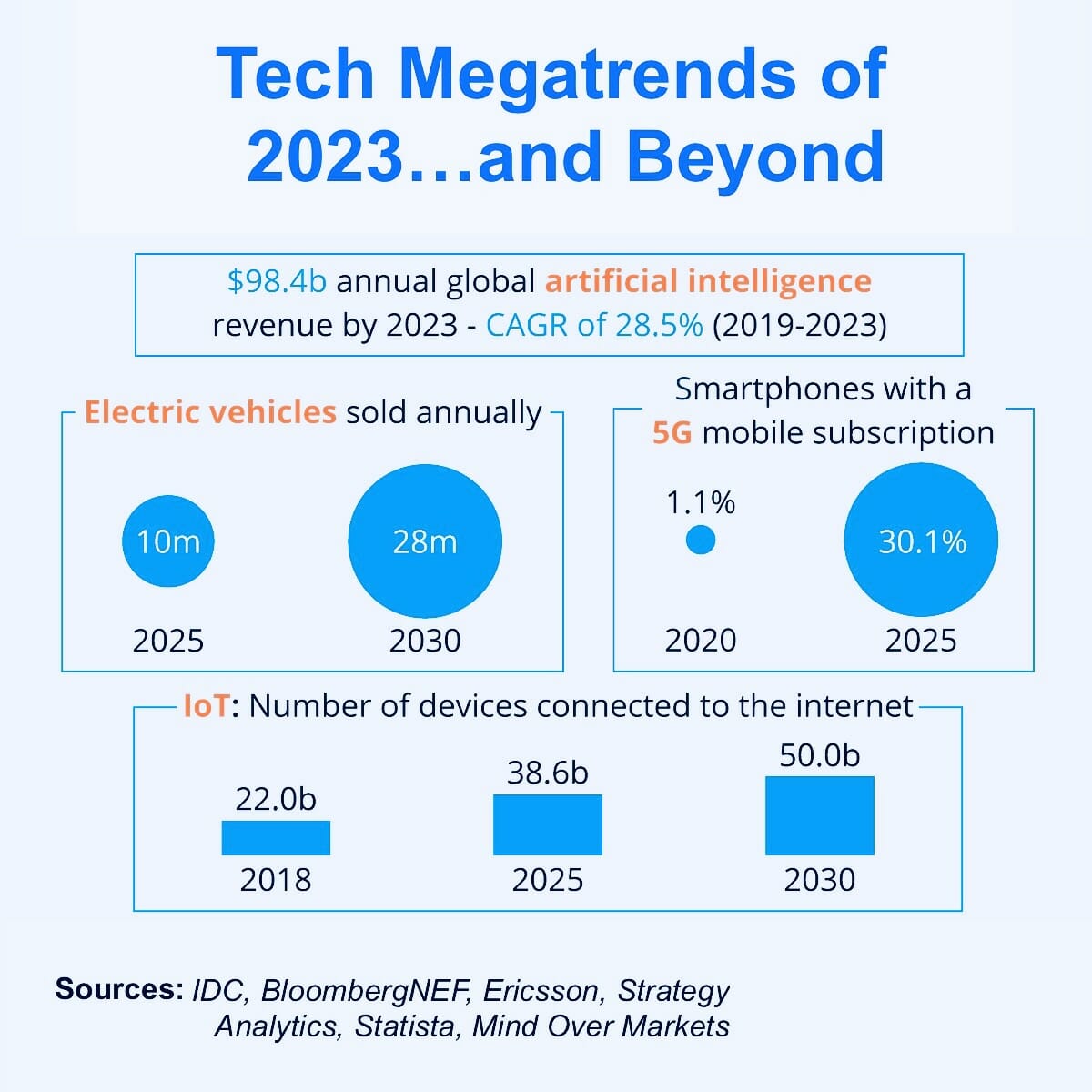 Technology companies are predicated on the truism that the only constant in life is constant change. As society evolves, it generates never-ending demand for innovation and new tools. The companies that are tapped into constant change will prove the most profitable, especially in the tumultuous times we’re witnessing today.

Don’t get spooked by media reports about Big Tech layoffs. To be sure, Alphabet’s Google (NSDQ: GOOGL), Amazon (NSDQ: AMZN), Microsoft (NSDQ: MSFT), Netflix (NSDQ: NLFX), and other tech giants have laid off more than 70,000 employees over the past year.

Real human pain is involved, of course. Sometimes, capitalism isn’t pretty. But from an investment standpoint, tech companies are getting into leaner shape in preparation for the next bull run.

Fintech on the rise…

Let’s focus on the burgeoning field of financial-technology (fintech). News reports surfaced this week that the Big Boys of banking are collaborating on a digital wallet to compete with PayPal (NSDQ: PYPL) and Apple’s (NSDQ: AAPL) Apple Pay.

The digital wallet will be designed to link with users’ credit and debit cards and be operated by Early Warning Services (EWS), a fintech company owned by seven of the country’s largest banks. EWS also operates Zelle.

This aggressive foray into digital wallets comes at a time when the banks could use a lift from new opportunities. During the fourth-quarter 2022 earnings season so far, the big banks have posted mixed earnings.

Despite a handful of beats on the bottom line, the banks as a whole have been grappling with declining dealmaking activity. They’ve also significantly boosted loan loss provisions in anticipation of rising credit defaults.

Meanwhile, Apple has been demonstrating its usual innovation, by invading the banking sphere. The consumer giant’s branded credit card already is a success.

The competition between Silicon Valley and bank sector stalwarts should heat up this year, as inflation continues to ease, central banks hit the pause button on rate increases, and economic activity picks up.

Bet on the disruptors…

Stocks have rallied so far this year, with the tech-heavy NASDAQ in the vanguard. On Monday, the main U.S. stock market indices soared higher.

The NASDAQ had been trading in the green Tuesday but reversed course in the afternoon, after the U.S. Department of Justice announced it was suing Google over its dominance of the online advertising market.

Google fired back, stating: “Today’s lawsuit from the DOJ attempts to pick winners and losers in the highly competitive advertising technology sector. DOJ is doubling down on a flawed argument…” Fact is, the tech sector is no stranger to litigation.

After the closing bell Tuesday, Microsoft reported quarterly operating results that beat expectations on the bottom line and showed strong growth in its cloud segment, although guidance was disappointing.

How should you play the January rally? There’s a compelling argument for increasing your exposure to the stocks on your wish list, especially the tech stars that had gotten too pricey. When current macro challenges wane, the tech disruptors will seize center stage again.

Editor’s Note: We’ve uncovered the first “Apple” of the electric vehicle industry. One unusual, under-appreciated company is secretly siphoning the EV industry’s trillion-dollar profits into investor accounts over and over again, like clockwork. Want to get in on the action? Click here for details.