It’s giddy-up time again, not just for the Permian oil cowboys but increasingly in other shale plays as well. Last week Baker Hughes counted 860 land rigs drilling oil and gas wells across the U.S., up from a multi-decade low of 382 a year ago.

That’s good news for oil workers as well as their employers. Shale drillers have drastically pared costs to the point where they’re once again aiming to grab market share from OPEC despite the pinch of low oil and gas prices.

But as the mothballed rigs are redeployed and signing bonuses dangled in front of scarce roughnecks, you can bet your bottom dollar that those costs will be going up once more. Drillers will spend more with their suppliers and contractors, while midstream operators will have to build costly new pipelines and processing plants to support the additional production.

In contrast, owners of the land above the wells will reap the higher royalties from increased output without spending a dime, unscathed by the operating costs spiral. It’s a great spot to be in, and Black Stone Minerals (BSM) has a myriad such spots as one of the largest owners of mineral and royalty interests in the U.S.

The partnership has partial ownership interest in more than 18 million acres and some 50,000 producing wells from coast to coast. It’s concentrated most heavily in the Southeast and eastern Texas, where it originated as a lumber company in 1876 and turned into a mineral rights buyer 19 years ago. 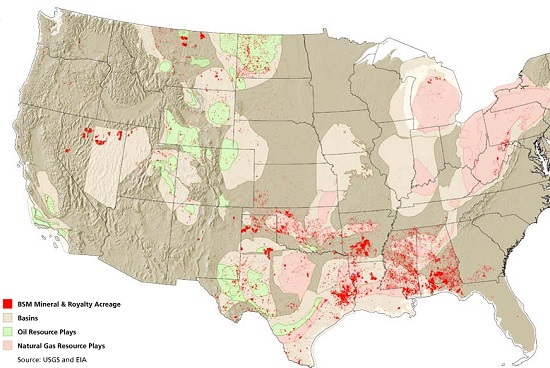 BSM continues to acquire mineral rights and has partial working interest stakes in some of the most attractive wells on its turf. But it’s lately worked to minimize investments in drilling and production, which are about to become more expensive, in favor of augmenting its stream of royalties. 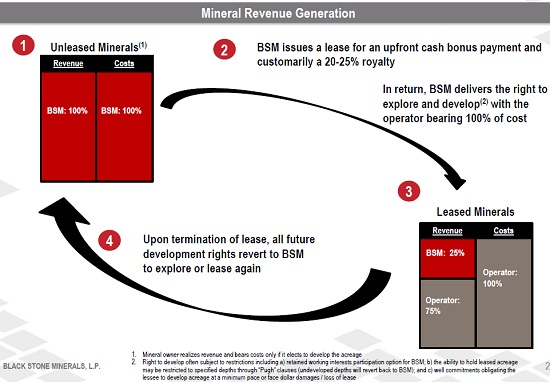 The CEO has run  this business from the beginning, long before its latest incarnation came public two years ago. He’s pulled off several large and well-timed recent rights acquisitions and development deals, and as a result Black Stone reported a very strong quarter last week and is poised to have an excellent year. Production from rights and royalties as well as working interests was up 19% sequentially and is on pace to top management’s forecast of a 14% increase this year.

Cash available for distributions jumped 42% year-over-year, providing 1.5x coverage that would have remained ample even if the sponsor weren’t getting paid less on its subordinated units. Debt leverage is low at less than 1.4 times trailing EBITDAX. The partnership’s structure is investor-friendly, with no incentive distribution rights for the sponsor and a minimum distribution set to increase 9% this quarter and a further 8% next year. 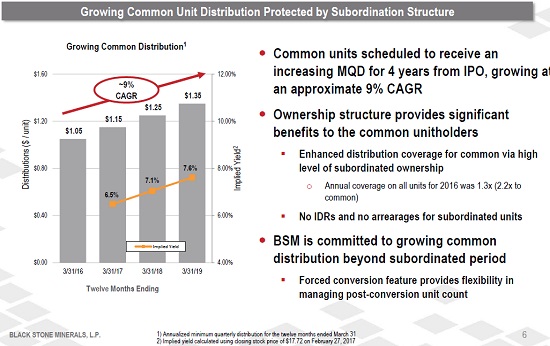 Black Stone has been aggregating mineral rights acreage in the Haynesville Shale, stretching from eastern Texas to northern Louisiana. It has put some $200 million into rights acquisitions nationwide since the start of 2016, nearly double what it spent in 2014-15.

Black Stone has parlayed its local knowledge and concentration into development deals committing its well-financed drilling partners to aggressive exploration schedules. The Haynesville is mostly a natural gas play, but it’s enjoying a revival comparable in pace to the mighty Permian, with the number of working rigs up to 39 from 13 a year ago.

BSM units still trade below their IPO price, which highlights the inherent risk of an investment closely tied to the pace of shale drilling. But pipeline stocks also have this risk, along with daunting capital spending needs. In contrast, BSM expects its capex to decline next year following the recent farm-out of  a capital-intensive working interest. Based on its recent track record, redeploying capital from drilling to mineral rights acquisitions should continue to pay dividends.

The bulk of this year’s expected output is hedged, minimizing the effect of short-term price moves. Oil and gas prices seem likely to move higher over the longer term, boosting production and one-time bonuses  from new leases.

I’m adding BSM to the Aggressive Portfolio with a buy limit of $20.