In a world that never stops surprising, momentum is a really big deal.

In physics, linear momentum is simply mass multiplied by velocity. The bigger something is and the faster it’s moving the likelier it is to continue in the same direction.

The same principle operates in stocks: big winners tend to keep winning in the short and medium terms. Despite a lot of academic and finance industry focus on this persistent pricing anomaly, it has simply refused to go away. Blame behavioral biases like anchoring and faith in mean reversion. In any case, what goes up still often keeps going up to such an extent that quantitative traders build strategies to exploit this tendency.

Meanwhile, business momentum tends to be especially valuable in the technology sphere. Here, the velocity of growth translates into economies of scale and, more importantly, into a network effect: the growing adoption of a technology, service or standard increases its attraction and value.

Momentum has certainly been working this year for the FANG quartet of tech heavyweights: Facebook, Amazon, Netflix and Google. We can argue about whether the N should really be Nvidia’s but their momentum was a thing of beauty until a sharp reversal in June. So far, July has been a muddle.

But, big winners though they have been, the FANG crew isn’t even the one with the most momentum in business or the capital markets. That distinction belongs to Chinese Internet stocks and in particular to the two 800-lb gorillas at the top of that heap, Alibaba and Tencent. Tencent (OTC: TCEHY) is the momentum monster you should ride. I’m adding it to the portfolio with a limit of $40.

Of course, at a market capitalization of $328 billion it’s far from cheap, or under-owned. But don’t let that stop you from getting a piece of China’s best-run and most promising Internet operator. Tencent has built up some serious momentum and it would take a lot to slow it down. 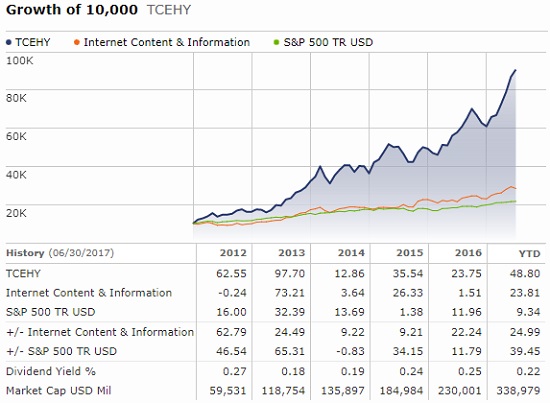 The share price is up nine-fold since 2011 and 43% year-to-date. This is a feature, not a bug, for a stock like Tencent. The price would be up a bit more if not for a recent hiccup illustrating the company’s reach and some of the attendant risks.

On July 4, Tencent’s share price fell 4% in Hong Kong after the Chinese Communist Party’s mouthpiece People’s Daily trained its ire on Tencent’s Honor of Kings online game. The addictive pastime was “poison” to the young people whose minds and bodies it consumed, the newspaper claimed. It also blasted Honor of Kings for twisting “values” and history.

Beijing is notoriously paranoid about anything that excites the citizenry more than its rotten dogma, so investors’ attack of nerves in the aftermath of this tantrum was understandable. But every hour spent online battling other fantasy warriors is an hour not spent considering how few rights one has in real life, so the CCP must know that games like Honor of Kings are essential safety valves and circuses.

In any case, the ruling party isn’t going to dismantle a compliant tech behemoth that has become a pillar of online commerce and the consumer economy. Tencent quickly adopted voluntary restrictions on when and how long children can play. That’s not likely to meaningfully dent a game with 55 million daily users that now accounts for more than 10% of Tencent’s revenue. 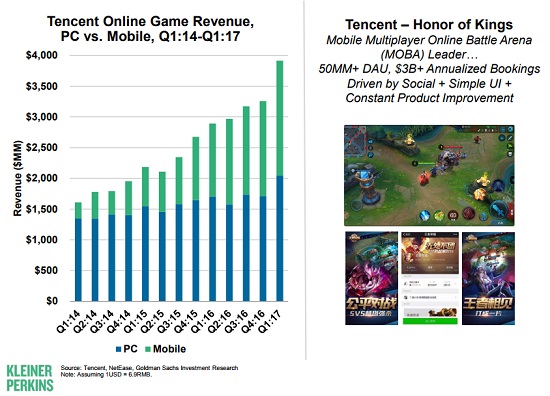 One of the attractions of Honor of Kings is apparently the way it blurs the line between a game and a social network. Similarly, WeChat is more than a messenger service: it’s also a place where one can transfer money, pay a bill, shop and even manage wealth. It’s Facebook and PayPal under one roof, with elements of Amazon and Priceline thrown in. Tencent and Alibaba are well ahead of their U.S. counterparts in turning their networks into integrated and fast-growing consumer platforms.

WeChat has 938 million users, a third of whom spend more than four hours a day there. The average WeChat user spends more than an hour daily on the service, at least 20% more than Facebook commands.

Tencent and its e-commerce ally JD.com also garner more than half of the daily average of 200 minutes spent online by Chinese mobile netizens. 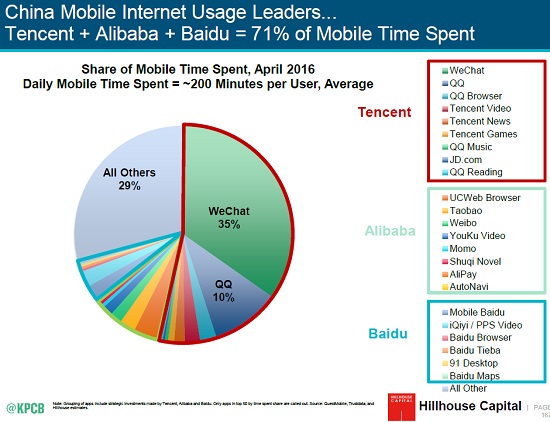 Could this vast commercial empire decline and fall? Of course it could. Happens all the time, and has for ages. But when you’re this big and growing this fast it will take something massive to alter the trajectory. Tencent, Alibaba, Facebook and Amazon are proving daily that Internet giants can keep growing fast provided they stay nimble. In fact, their size and reach are huge advantages.

The Chinese stock market has stabilized following the 2015 boom-and-bust, and the consumer economy is performing better too, aided by the global industrial recovery. Emerging markets have handily outperformed developed equities this year and continue to attract fund inflows. These are all tailwinds for Tencent, though it hardly needs them.

The valuation is in line with Facebook’s and Alibaba’s, in other words, it’s rich. But we’re not shopping for candleholders at a yard sale here. Chinese growth and global momentum champs don’t come cheap, because why would they? And they don’t need to be to keep on working.