Are government incentives for ethanol leaving the US behind in the race to fuel up with natural gas? The latest data suggest as much.

The first graphic belows shows the AFVs that were made available each year beginning in 2001. The EIA writes that “‘made available’ means the vehicle either was delivered for the first time to a dealer, leasing company, or end user; was available for delivery to a dealer, leasing company, or end user; or was otherwise placed ‘in use’ during the reporting period.” For the purposes of this article, I will simply use “sold” as a reasonable approximation, but do note that not all of the vehicles were actually sold. 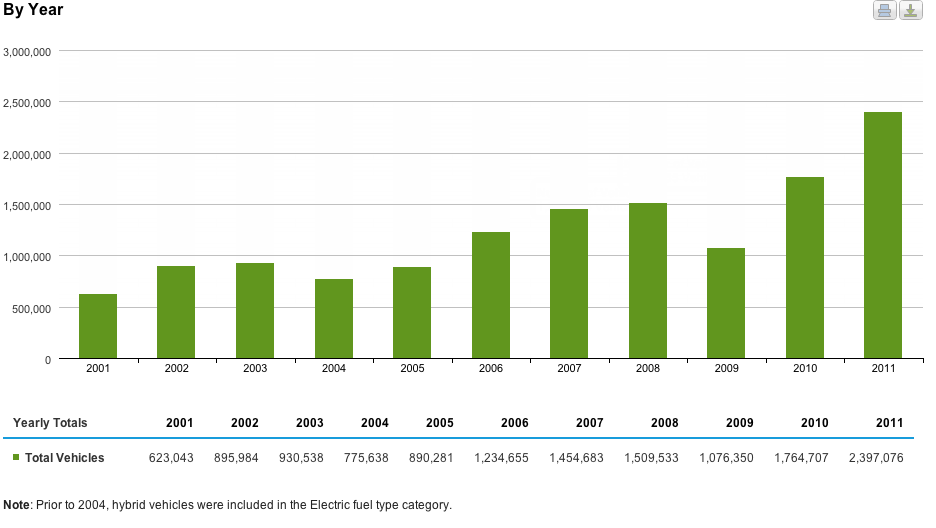 In 2011 nearly 2.4 million AFVs were sold, which was a 36-percent increase over the previous year and a 123-percent increase in AFVs sold since 2009. The overwhelming majority of these vehicles were FFVs (88 percent in 2011) designed to run on either E85 or gasoline. Gasoline-electric hybrids were a distant second at 11 percent of the AFVs sold in 2011. 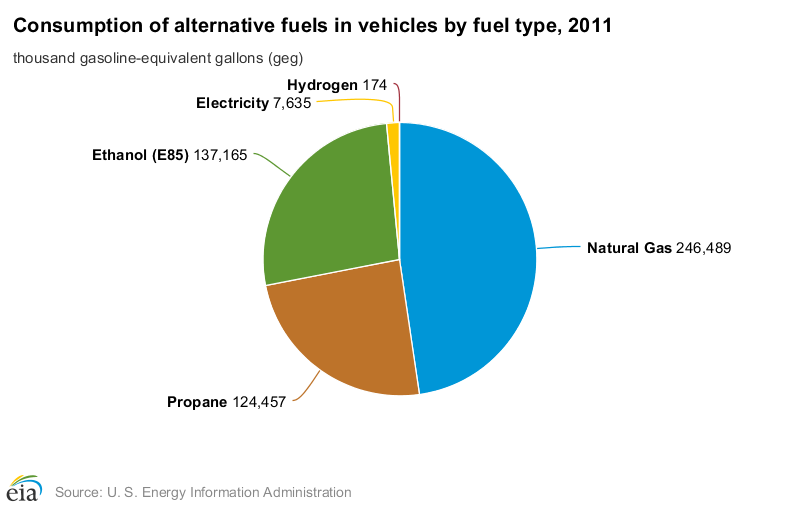 This means that even though the number of FFVs on the road is growing rapidly, most people are simply using gasoline instead of E85 since gasoline is still usually cheaper to use per mile traveled. If I happened to be a governor in a Midwestern state that produces a lot of ethanol but no oil (like Iowa), I could probably think of a few ways to encourage greater use of this locally produced fuel.

And, in fact, there are some incentives out there for building out E85 infrastructure and encouraging use of E85. Because of the “blend wall” regulatory issue I covered recently, there is an added incentive for refiners to blend and sell E85. The skyrocketing price of ethanol use quotas discussed in that issue may ultimately push more refiners in that direction.

Table 1 shows the growth rate of various alternative fuels from 2007 to 2011. While natural gas did dominate usage throughout the period, the growth rate for E85 was higher. Over the period, E85 usage in AFVs rose by 154 percent versus a 23 percent increase in usage of CNG. As long as strong government support for ethanol continues, E85 usage will probably continue to rise. This may create some investment opportunities around companies that make engines or infrastructure components that are E85 compatible. However, these sorts of investments always come with the added risk from potential changes in government policy.

Natural gas as an alternative fuel hasn’t gotten nearly the same type of enthusiastic response from the US government, but the high differential between oil and natural gas prices has still driven some to switch. The high cost of a CNG car versus its gasoline counterpart means that such a switch doesn’t make sense for the average driver, but for fleet owners or those who drive many miles each year, the payback period can be short.

There is plenty that state and federal governments could do to make natural gas conversions more appealing. Whereas the build-out of E85 capacity is being driven by mandate and incentive, the build-out of natural gas capacity is being driven by the market dynamics of oil versus natural gas (supply and price). Governments could focus on the high price differential between CNG and gasoline cars and work to reduce any portion caused by excessive regulations or incentives for other fuel options that place NGVs at a competitive disadvantage.

This high differential is not an issue in developing countries – where Figure 3 shows that natural gas vehicle fleets have been growing exponentially. Iran has more NGVs than any other country with a fleet of 2.86 million (Source), followed by Pakistan (2.85 million), Argentina (1.9 million), Brazil (1.7 million), and China (1 million). In fact, China’s addition of 378,000 NGVs in the past 12 months dwarfs the entire US fleet of 123,000 NGVs. 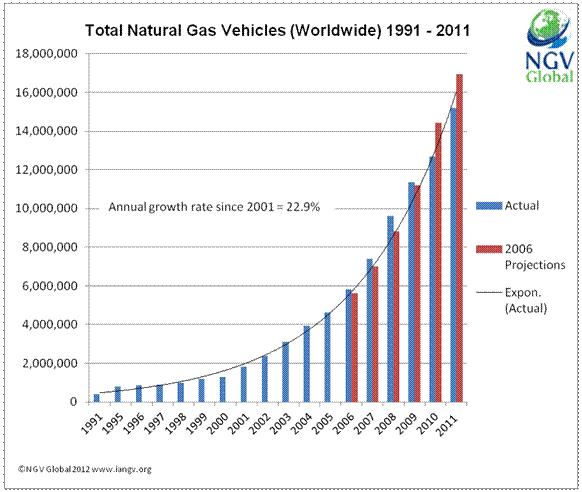 Replacement fuels, on the other hand, represent a much larger and faster growing fraction of transportation fuel. These replacement fuels are ethanol in standard motor gasoline and biodiesel, often mixed with petroleum diesel. They are categorized as replacement fuels because they replace fossil fuels in conventional automobiles (as opposed to AFVs).

In 2007, replacement fuels comprised 2.7 percent of total vehicle fuel consumption. By 2011, that fraction had grown to 5.6 percent. However, because future growth of replacement fuels — specifically ethanol in motor gasoline — will be constrained by the blend wall, future displacement of gasoline and diesel in transportation fuels will probably need to come from the alternative fuel category. As the deck is stacked at the moment, E85 may be the biggest winner, although natural gas will certainly be a contender in the US as it already is globally.

Given the recent slump in oil prices and the softening of several key global economies, no one was much looking forward to quarterly results from the leading global oil services provider. Certainly not the investors who’d discounted the Growth Portfolio holding 13 percent from Valentine’s Day peak ahead of Friday’s first-quarter numbers.

But Schlumberger has a way of making lemonade out of sour crude, and once again squeezed out two cents a share above analysts’ consensus and a 5 percent EPS gain year over year, as strong growth in the Middle East, Asia and South America offset the effects of hydraulic fracturing oversupply in North America. Revenue was up 8 percent year-over-year, keyed by an international gain of 13 percent. Overseas momentum in Saudi Arabia, Iraq, China and Ecuador remains crucial to Schlumberger’s plan to continue growing earnings per share at least 10 percent annually. International operating income, which now accounts for 70 percent of Schlumberger’s total, was up 21 percent year-over-year.

And while the company’s prospects remain strong, perhaps more interesting still was the commentary CEO Paal Kibsgaard made on the conference call about the global energy markets. In his prepared remarks, Kibsgaard said “the overall outlook for 2013 remains largely unchanged from the update we gave in January, both in terms of GDP growth as well as the fundamentals for the global oil and gas markets. We still expect that oil supply will continue to grow in North America while other non-OPEC production will likely continue to face challenges, and we expect global spare capacity to remain around current levels—absent any unexpected macroeconomic change or geopolitical event.”

The first question in the conference call pressed Kibsgaard on the market fundamentals in light of the “oil price weakness” and the related toll on energy shares. “We have obviously seen the recent drop in Brent prices which is mainly driven by the macro numbers, the recent macro numbers and also, seasonally lower demand. But we still expect very strong support around $100 per barrel,” the CEO responded.

The stock closed lower on the day, before reversing those losses Monday. And though the price of shares and energy commodities will continue to gyrate, the conference call reinforced our faith that the long-term path from here leads higher.