Democracy is more of an a pretense than a fact in the modern boardroom, which offers corporate insiders ample opportunities to profit at the expense of the rarely roused public shareholders.  But at least the appearances must be observed, with shareholders electing directors and directors settling key issues by majority vote. Shareholders must consent to mergers. Directors must mind shareholders’ best interests.

Master limited partnerships aren’t like that – there are few nods to equality here. Limited partners lack the power to oust the general partner (GP), and can’t even be sure that the GP has their interests at heart first and foremost.

Most of the time, the distinction between a sham democracy and no democracy is moot and the companies, be they partnerships or corporations, get on with the business of making money.  But then there are the times when the interests of the general partner and limited partners diverge. And in those instances, the general partner is entitled to favor the general partner every time. This right is backed by the founding partnership agreement and proclaimed among the many other risk factors in the parts of annual reports almost no one reads.

One obvious wedge between the GP and the unit holders is the common GP entitlement to incentive distribution rights, which entitle the GP to a growing share of distributions as these reach preset levels.

The typical IDR scheme might entitle the GP to a 2 percent interest in the early distributions, escalating to 15, 25 and 50 percent of the incremental per-unit payouts above those thresholds. The IDR is an almost universal feature of the initial public offerings by midstream MLPs, but typically not the upstream ones. The industry as a whole is split between a group of partnerships like Enterprise Products Partners LP (NYSE: EPD) that have bought out the IDRs and GPs like Kinder Morgan (NYSE: KMI) and Energy Transfer Equity LP (NYSE: ETE), which continue to enthusiastically harvest IDRs from the affiliated MLPs they manage.

And then there’s Inergy LP (NYSE: NRGY) which has tried to have it both ways in recent years. In 2010, it bought out its general partner and its IDRs with the stated goals were typical for such transactions: a simpler, more streamlined equity structure and, most importantly, a lower cost of capital. That last consideration is key, because IDRs tend to inhibit growth by siphoning off a growing proportion of the rising distribution.

And less than a year after striking this blow for simplicity and growth, Inergy turned around and spun off its Northeast midstream assets, headlines by gas storage strategically located near the Marcellus Shale, with IDRs included. Not only that, it didn’t bother with the 2, 15 or even 25 percent. All distribution growth after the initial payout would accrue in equal measure to the limited partners and to Inergy itself as the GP.

Investors were not deterred, and the IPO got off to a strong start. Throughout 2012, it just kept chugging. By April 29, less than 17 months after their debut, units of Inergy Midstream LP (NYSE: NRGM) had touched a record high after a 53 percent rally.

What investors didn’t know was that Inergy was already deep in merger talks with the GP of another MLP that would profit both parties, at the apparent expense of NRGM’s public investors.

On May 6, Inergy unveiled a complicated deal merging Inergy Midstream with Crestwood Midstream Partners LP (NYSE: CMLP), another MLP focused on shale basins, where it does gas gathering and processing.  Midstream’s GP, sponsored by management and the First Reserve private equity group, plans to exchange its GP interest and IDRs for NRGY shares. NRGY will then make a tax-free distribution of its majority stake in NRGM to its own unit holders. And NRGM will issue extra units with which it will compensate CMLP’s limited partners.

Billed as a merger of equals, the deal in fact cashes out Inergy’s top management, which will surrender control of the merged entity to Crestwood’s CEO. The transaction was shopped to  Crestwood and First Reserve by an investment banker Inergy hired.

The assets are in fact somewhat complementary, and the merged enterprise  will reap important benefits of scale and diversification. So both NRGY and CMLP spiked on the news and continued to rally for days afterward.

But someone didn’t get invited to the party. NRGM units slumped 7 percent on the news and still haven’t recovered. They’re now down 13 percent since May 1.

Maybe that’s down to dilution fears, though management swears the deal will be accretive to both NRGY and NRGM. Maybe it’s because the share swap between NRGM and CMLP awards the later a 10 percent premium over the close before the deal was announced.

A summary of merger talks filed with the Securities and Exchange Commission indicates that a Crestwood conflicts committee insisted that the GP sweeten the deal for Crestwood’s unit holders. There is no record of similar solicitation on behalf of NRGM, perhaps because its own GP and majority owner made out so well.

Senior executives on both sides of the transaction were big winners, gaining accelerated vesting of their equity incentive plans and golden parachutes for those whose services will no longer be required.  NRGY shareholders, including both management teams will also benefit because the more units NRGM has outstanding the higher NRGY’s IDRs. 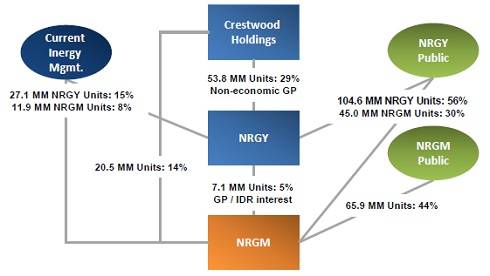 In fact, it’s possible the deal was structured the way it was to take advantage of Inergy’s extra-generous IDR scheme. It’s so generous that the GP has every incentive to keep adding even minimally accretive assets, since it’s entitled to half of every increase in the distribution. The recent SEC filing estimates the present value of the IDRs at $1 billion; all the limited units put together are worth less than $2 billion now.

This isn’t exactly a cautionary tale, since NRGM units remain up nicely since the IPO. But it’s a reminder that the IDRs profit the general partner at the expense of the limited partners. By buying into that premise at the time, investors in NRGM invited their GP to cram more assets into the scheme without caring whether they like it.

I am inclined to sell NRGM and replace it with some of the better rated MLP’s. What do you think?

In the short term it’s oversold and could recover a bit, but longer-term that’s probably a good idea. Those IDRs will crimp distribution growth and encourage continued equity issuance

Do general partners stock act like MLPs with reference to K-1s and tax benefits?

It depends. ETE is an MLP like the MLPs it manages, so issues a K-1, while KMI is a C-corp that pays dividends reported on a 1099.

where are you now on BWP and ETP?

In Igor Greenwald’s June 7, 2013 article “Moving Targets to Stock Up on Winners”, he addresses both of these recommendations. A link is available below. He advises buying BWP on the dip below $30. For ETP,
he has a buy under $50 recommendation but indicates a preference for ETE instead.

Any update for LINE?

Igor discussed Linn in an article on June 7,2013. A link to his article is available below.
Linn Energy is a buy below 40. Linn management feels that the Berry merger should go through in the next quarter.

what is going on with linn energy

Hi John,
The block sell orders that have hit the tape in recent days are certainly suggestive of selling by an institution. The concern is mainly over the delay in SEC approval for the shareholder votes needed to seal the Berry merger, despite the filing by Linn of an amended S4 form with the SEC last week. On this topic, I can only take the company’s assurances that the merger will proceed at face value for now. I know that at least one brokerage has speculated about the possibility of a higher offer for Berry either from Linn or an alternate suitor. But in the absence of new facts, I think the prudent course is to hold on despite the misgivings until more information becomes available. Hope this helps.