The MLP boom is now at least a decade long; for most partnerships the financial crash and the ensuing Great Recession were little more than a hiccup. Strong capital appreciation and unusually low interest rates have driven yields to some of the lowest levels on record. How can longtime investors and newcomers to MLPs alike best take advantage of this state of affairs.

One increasingly obvious solution is to invest in general partners with attractive cash flow from incentive distribution rights. As detailed in the previous story, IDRs reward the GP with progressively fatter slices of the incremental gains in unit distributions. The longer distributions have been growing, the bigger the share of the cash flow earmarked for the IDRs.

Predictably, an index representing the handful of publicly traded general partners has outperformed strongly of late. Despite last week’s heavy profit taking, it was up 23.4 percent year-to-date through the end of May, versus 18.4 percent for a broad MLP benchmark.

Owning an interest in IDRs allows one to profit not just from all the future distributions to the limited partners but from past ones as well, since it’s the history of growth that entitles the GP to maximize the IDR percentage.

Once distributions reach the maximum IDR tier they tend to stay there, and hitting that mark can have a big effect on the general partner.

For example, at a recent industry conference, Teekay Tankers (NYSE: TNK), sponsor of Growth Portfolio holding Teekay LNG Partners LP (NYSE: TGP), provided a vivid illustration of the earning power of a maximized IDR scheme. Its GP distributions from TGP and another affiliated MLP, Teekay Offshore Partners LP (NYSE: TOO) have roughly doubled over the last two years now that Teekay has earned its 50 percent split. And in two more years, the two affiliates could bring in nearly double what they will bring in this year, the company hopes.

Or have a look at the illustration below, prepared last year by the refiner Phillips 66 (NYSE:PSX) to show how relatively modest distribution growth at an affiliated MLP, DCP Midstream Partners LP (NYSE: DPM) promises to dramatically inflate the cash flow to the general partner it co-owns. DPM forwarded to its GP 22 percent of its total distributions in the most recent quarter. 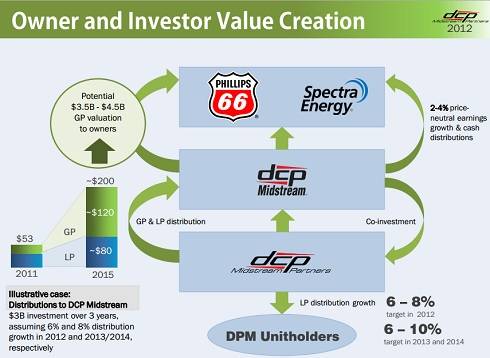 Kinder Morgan (NYSE: KMI) is not the oldest of the listed GPs; that distinction belongs to Crosstex Energy (Nasdaq: XTXI), which went public in 2004. But it’s certainly the largest, with a market capitalization of some $40 billion. KMI is a corporation that converts GP and LP distributions from the two partnerships it manages, Kinder Morgan Energy Partners LP (NYSE: KMP) and El Paso Pipeline Partners LP (NYSE: EPB) into shareholder dividends. 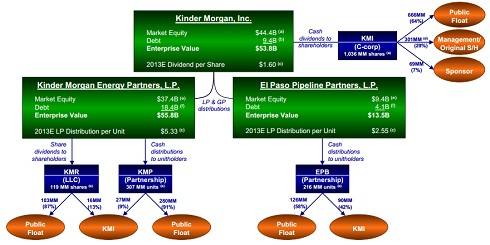 The forecast 2013 distribution of $1.60 per share amounts to a yield of 4.1 percent at the current price and would represent a 14 percent increase over last year’s payout. The company expects the dividend to grow by 9 to 10 percent annually over the next few years.

Although the current yield is relatively modest, it is extremely likely to grow at an above-average rate for years as KMI captures a growing share of the distributions by its affiliates. As a bonus, KMI dividends are suitable for tax-advantaged retirement accounts while standard MLP distributions would be subject to the unrelated business income tax.

KMI has vastly outperformed KMP since its IPO two years ago, and it’s notable that enterprise founder Richard Kinder owns 23 percent of the KMI shares but less than 0.1 percent of the KMP units. KMI is a new buy in the Growth Portfolio below $42. 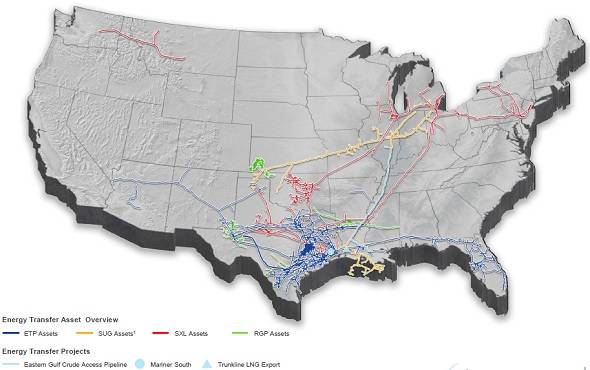 ETE received more than 31 percent of ETP’s distributions and not quite 5 percent of Regency’s in the most recent quarter. Its own distributions yield 4.5 percent at the current unit price and last month’s payout was up 3 percent over the prior year. More importantly the recent acquisition of the Southern Union Company has expanded its network of interstate natural gas lines and enhanced its LNG export potential, while the purchase of Sunoco diversified Energy Transfer into crude and refined products and strategically positioned it to participate in the development of the Marcellus and Utica shales. As these assets grow, the IDRs will deliver to ETE an increasing proportion of their cash flow.

ETE has already been a big winner in recognition of that potential, advancing more than 50 percent in the last year while KMI gained little more than 20 percent. And though it’s given up very little ground in the recent correction, it’s still worth scooping up. We’re adding ETE to the Growth Portfolio with a buy maximum of $62.