Beware the Downside in Crude

In a world that’s had it with commodities on suspicion of softening demand, crude oil has been spared for reasons that are not entirely clear.

Sure last week’s attempted breakout was quickly beaten back, pushing Brent back toward the bottom of the recent trading range at $100 a barrel. But West Texas Intermediate is still in the mid-90s, as if slow to get the message about roiled emerging markets and a tougher-talking Fed. 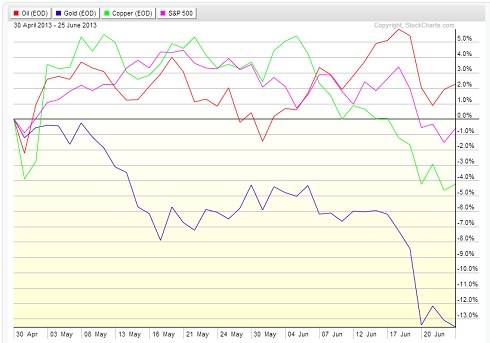 This stubborn refusal to submit to harsher punishment alongside other risk assets amounts to a bullish divergence. And if they awarded prizes for relative performance, or if the recent trading action were a reliable sign of things to come, energy investors could relax.

Unfortunately, we can’t, because oil’s luck may be about to run out. Longer-term prospects still look bright, of course, as developing countries get richer and demand their fair share of this scarce resource, even as the cost of extracting it from ever greater depths and ever more difficult geologies continues to climb.

But meanwhile the emerging economies that have been the principal drivers of growing demand for the commodity are in the midst of a nasty slowdown compounded to varying degree by tighter credit, currency depreciation and popular protests against austerity.

These developments have been so recent that they have not yet sparked widespread downward revisions in demand forecasts and crude imports. But at this point that’s only a matter of time, and that means time may not be on the side of the crude oil bulls and investors in energy-sector equities.

China’s apparent oil demand was up 1.9 percent year-over-year in May, the slowest year-over-year gain in 9 months, according to a Platts analysis of Chinese government data. And 1.9 percent is well short of the consensus call for growth of 4 percent in Chinese consumption this year. 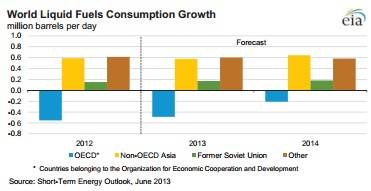 In fact, the US Energy Information Administration is counting on China to supply nearly half of this year’s projected global growth in demand for crude oil. Yet Platts cites the widely noted economic slowdown to warn that “apparent demand growth could likely stay in the low single-digit rates until the end of the year.”

It’s no mystery why China’s growth is slowing: the government in Beijing has admitted to itself that the old development model based on excessive construction, heavy capital spending and profligate lending no longer offers a way out.

In the long run, its reform efforts, starting with the credit crunch inflicted on the country’s vast shadow banking system, could well bear fruit. But in the shorter term they’re liable to drive reported GDP growth below 6 percent and force the closure of many uncompetitive factories. This is not a recipe for an oil boom, but a pretty plausible backdrop for significantly lower crude prices.

And of course China is not alone in this predicament. The protests recently convulsing Brazil have been spurred by dramatically slower growth and (sound familiar?) a contraction in unsustainable credit growth. Government attempts to hike public transport fares in response to growing budget deficits merely provided the final spark.

Brazil is hurting in part because China is no longer so eager to buy its iron ore and other commodities. But its problems are pretty typical for emerging economies caught between the Chinese slowdown and the ongoing economic malaise in the developed world, especially in Europe and Japan. Malaysia’s trade surplus has shriveled to the lowest level since the Asian financial crisis of 1997-98, while Indonesia is already running a trade deficit. Strong domestic demand is still powering growth in these economies, but that can only go on for so long while much of the rest of the world either stagnates or retrenches.

Recent sharp drops in emerging-market currencies will also crimp demand. For instance, India’s rupee has slid 9 percent so far this quarter against the dollar, making imported energy that much more expensive and already eroding demand for natural gas.

Real Expensive in Reais and Rupees 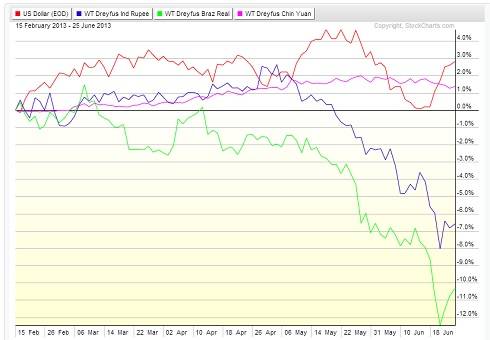 Which isn’t to say that crude couldn’t soar on any given day in response to the death of the ailing Saudi king or the bombing of Iranian nuclear facilities, to name just two much discussed upside risks. But at this point sharply higher prices would merely destroy more demand, and so wouldn’t necessarily be long-term bullish.

Less dramatically, crude gets support from Saudi Arabia’s willingness to limit its output and from the embargo that’s taken as much as a million barrels per day of Iranian crude out of the global marketplace. But the Saudis won’t be able to cut their way out of a global slump even if they could afford to do so, while Iran can hardly afford an indefinite embargo. Meanwhile US shale production and Iraqi oil output are ramping up at a time when demand growth has notably slackened.

None of this is meant to scare anyone out of Chevron (NYSE: CVX) or Schlumberger (NYSE: SLB), two of the many energy investments we continue to recommend. But these industry titans would certainly be hit along with everyone else if crude were to slide to, say, $80 a barrel.

That’s one reason we’ve been more interested in dumping losers than picking new winners of late. Noble Energy (NYSE: NBL) is a terrific oil and gas explorer, but we’re content to wait for a further discount given the global economic omens.

One day the clouds will lift, as China fixes its most pressing problems and Europe stops being such a drag. But one has to wonder whether significantly cheaper oil won’t be a part of that cure. Now’s the time to prepare.

Iran has just elected a political moderate as President who is much more likely that his predecessor to attempt to engage in a positive way with the West. It is in Iran’s economic interest to convince the West to lift economic sanctions thereby returning Iranian oil to world markets and adding to the world supply of oil.