A Flair for Adventure, Richly Rewarded

The age of the American oil empire is past. Most US energy producers are opting out of risky international entanglements in favor of fast-growing and politically secure domestic shale plays.

No wonder drillers would prefer to work the Texas fields that are booming once again, as well as the recently discovered hydrocarbon bounties in North Dakota, Colorado and Pennsylvania.

Noble Energy (NYSE: NBL) is getting as fat as anyone on such home cooking. But it’s also ventured into geopolitical hotspots in pursuit of offshore riches and this appetite for risk has been richly rewarded.

Noble’s lucrative reserves in Colorado’s Denver Julesburg (DJ) basin, Appalachia’s Marcellus shale and offshore in the Gulf of Mexico have recently been supplemented by major gas developments off the coast of Israel in eastern Mediterranean and in Equatorial Guinea’s waters off West Africa. 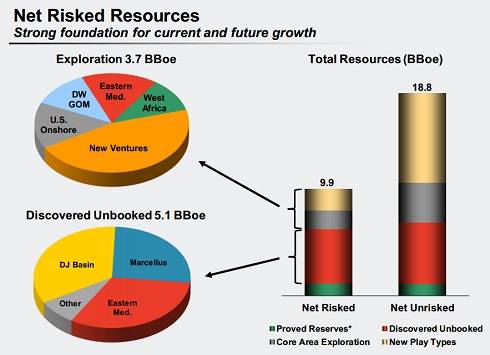 The Tamar field began supplying gas to Israel this spring and Alen should begin delivering condensate to an offshore processing facility this fall. Together with the rapidly expanding output from Colorado and Pennsylvania, these projects are powering strong revenue and cash flow growth at Noble.  Some of the proceeds will be funneled into new exploration projects ranging from the Gulf of Mexico and Nevada to the coastal waters off Cyprus, Nicaragua, Sierra Leone and the Falkland Islands.

Noble’s founder once drilled wells gratis in the Sherwood Forest to aid Britain during World War II, and his successors have stayed true to that adventuresome spirit.

As a result, production volumes are expected to rise some 20 percent from first-quarter levels by the end of the fiscal year, as the Israeli and West African projects ramp up alongside the DJ basin and the Marcellus.

And unlike so many of its rivals, Noble will be financing the bulk of this year’s capital spending with cash flow from operations, while free cash flow should turn positive late this year and is forecast to exceed $400 million in 2014. This is growth being financed by the ample returns on past investments rather than speculative borrowings. Despite these solid fundamentals and the stock’s (50.87) 17 percent rise year-to-date it remains competitively priced and a bargain based on next year’s likely profits. 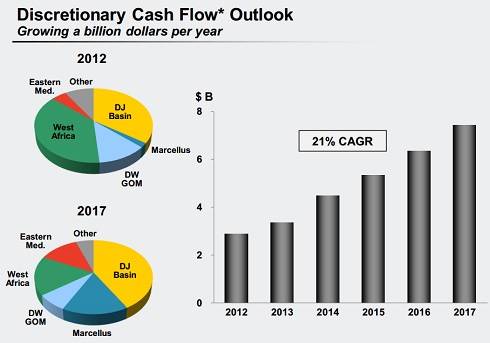 Noble’s premier asset is the Wattenberg field in the DJ Basin, which produced a third of the energy sold last year by volume and accounted for a comparable proportion of proved reserves as of the end of the year. As of yearend, Noble controlled 750,000 net acres in the DJ Basin, which also includes the Niobrara shale formation in northern Colorado as well as prospective deposits in Wyoming. DJ Basin production was up 25 percent year over year in the first quarter thanks to stepped up drilling, longer laterals and closer well spacing. Noble is spending nearly half of its capex here this year, in part because the longer laterals in the oily part of the play promise triple-digit rates of return.

In the Marcellus, the company has partnered with Consol Energy (NYSE: CNX) and is stepping up production on the 176,000 acres where it operates in the wet gas window of southwester n Pennsylvania and northern West Virginia. Including Consol’s dry gas wells, Noble holds a 50 percent interest in 628,000 net Marcellus acres. After drilling 25 wells in its primary focus area last year, Noble will ramp up with an additional 90 wells this year.

Noble also holds an enviable inventory of development prospects in the Gulf of Mexico, which accounted for 8 percent of production last year.  That will soon surpassed by the output from the eastern Mediterranean, where the newly harnessed Tamar field contains an estimated 9 trillion cubic feet (tcf) of natural gas, but is dwarfed by the more recently discovered and as yet undeveloped nearby Leviathan prospect, with an estimated 17 tcf. Another nearby prospect in Cypriot waters is thought to contain an additional 7 tcf.

This gas should prove more valuable than US reserves because it can be sold in Israel at higher prices, recently higher by a third. Prospects for continued development of Tamar, and ultimately Leviathan, took a big step forward Sunday when the Israeli government made a long-awaited decision authorizing the export of 40 percent of the offshore production, over objections that this would raise domestic prices. Last week, the Cypriot government approved a provisional deal with Noble and its Israeli partners to build a liquefied natural gas plant on the southern coast of Cyprus for processing the gas extracted from the territorial waters of Cyprus and Israel. The company has also discussed an offshore LNG facility with Australia’s Woodside Petroleum, its partner on Leviathan.

While offshore international projects are notoriously complex and delay-prone, Tamar came into operation ahead of schedule just four years after discovery and Alen is on schedule in West Africa, leaving Noble to argue that its operating expertise is a competitive advantage. The scale of discoveries in the eastern Med and the pace of production gains in Colorado speak well of Noble’s geologists.

Only the prospect of a seasonal downturn in oil prices, compounded by an economic slowdown in developing countries and more financial market volatility, keeps us from adding Noble to our Growth Portfolio now. But we’re placing the stock on our Watchlist as a speculative Buy and would look to take advantage of any dip below $54 to the rising 200-day moving average.

your PDF version of this month’s newsletter is corrupt !

We are sorry to hear that you are experiencing problems opening this months PDF. You can download the HTML version by clicking on the link below:

If you need additional assistance please feel free to contact one of our representatives at: 800-832-2330.

Just received Investing Daily week in review 7/6 and the invite for “The Balken Sequel”. I tried searching this site since I’m already a member but couldn’t find the article. Please advice.

Thank you for your post. You can read the special report which talks about the Bakken Sequel by clicking on the link below:

You can also find more special reports by logging into Energy Strategist and viewing the “Resources” section of the website.

If you need additional assistance please let us know.