We’re a resourceful species that’s put a rover on Mars and a flea collar on Rover. In theory, at least, we ought to able to find an easy way to invest in MLPs.

Yet master limited partnerships remain a messy proposition, rife with business risk as well tax-season confusion. And while there are many tradable, diversified proxies out there dedicated to cutting through the clutter, they come with their own pitfalls and complications. Let’s take a look at the surprisingly short list of MLP-related exchange-traded funds and notes to see if any qualify as progress.

But first, let’s formulate a wish list. Ideally, we’d want something that duplicates the tax advantages of MLPs without the bothersome partnership income forms. We’d want something diversified, liquid and inexpensive. Ideally, its distributions could compound in a tax-deferred retirement account. And of course the thing would faithfully reflect the performance of the entire MLP universe –except perhaps for any laggards.

The reality is not as accommodating. Outside of closed-end funds (more on them next month) we’re stuck choosing between one of several exchange-traded funds or exchange-traded notes. They’re tradable and diversified, alright, but not especially cheap and most certainly not tax-advantaged in the manner of an individual MLP.

There are now a few MLP-themed ETFs out there and, like all ETFs, each represents a basket of individual names matching the composition of an index. The largest of these, the Alerian MLP ETF (NYSE: AMLP) is most popular vehicle in the space with $6.6 billion in assets.

AMLP is designed to duplicate the performance of the Alerian MLP Infrastructure Index, a cap-weighted collection of 25 mostly midstream energy movers and processors. The top holding makes up not quite 10 percent of the portfolio, and the top five contribute 41 percent of the basket.

AMLP pays quarterly distributions and has a 5.9 percent annual yield based on the last such payout, with distributions growing steadily over time. Moreover the bulk of these distributions to date has been classified as return of capital, permitting recipients to defer the income tax hit.

Instead of the often cumbersome K-1forms, investors get a simple 1099 for qualified dividends. And unlike an individual MLP, AMLP can be held in an advantaged retirement account without triggering the tax on unrelated business income.

Given all that, the 0.85% management fee seems almost fair. But AMLP, like all MLP ETFs, has a serious flaw. Unlike regular ETFS, it is not a “pass-through vehicle,” so that corporate taxes not levied on individual MLPs are levied on AMLP’s share of their distributions, at the full 35 percent federal corporate rate with state taxes thrown in on top.

As a result of this tax inefficiency, the performance of MLP ETFs consistently falls far short of the index the track.  For example, AMLP returned 37 percent between its Aug. 25, 2010 inception date and May 31. Meanwhile, the Alerian MLP Infrastructure Index returned 66 percent over the same span.

Worse still, when AMLP investors sell their holdings, they will end up paying their own income tax on dividends AMLP paid out after paying its own taxes up front. The daily net asset value of the fund reflects its deferred tax liability, which for AMLP recently amounted to 4 percent of its assets’ market value. So investing in MLPs via an ETF has the major disadvantage of losing the main tax advantage of an individual MLP, though the tax deferral does provide some value.

All other MLP ETFs share this drawback, and in addition are much smaller and less liquid than AMLP.

One of These Things Is Not Like the Others 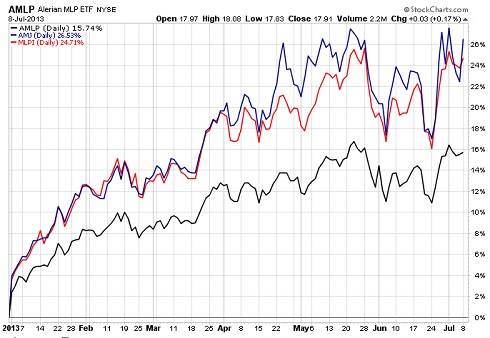 That’s the main reason the next three largest MLP proxies out there are all exchange-traded notes, which are simply unsecured credit instruments representing the promise by the issuer to pay out returns comparable to the returns on the underlying index, minus fees of course.

Because the issuer is not collecting an actual profit stream it does not pay corporate tax, avoiding that drag on performance. The UBS E-TRACS Alerian Infrastructure Index ETN (NYSE: MLPI), which tracks the same index as AMLP, has returned 26.4 percent over the last year (through June 30), versus 27.3 percent for the underlying index.

The downside is that, unless the ETN is held in a tax-deferred account, its distributions are taxable in the year in which they were made at the recipient’s ordinary income tax rate, rather than the reduced rate on qualified dividends. So while the ETN avoids corporate taxation just like an MLP, its loses an MLP’s tax deferral benefits unless held in a 401((k) or an IRA. And in addition investors take on the (typically modest) risk that the issuer defaults. Still, MLP ETNs are a much better deal than MLP ETFs, especially if held in a tax-deferred account.

MLPI has $1 billion in assets and the same 0.85 percent annualized management fee as the AMLP. But it does not have an additional hazard posed by the only larger MLP ETN, the JPMorgan Alerian MLP Index (NYSE: AMJ). Last summer. JP Morgan suspended issuance of new ETN shares, making those already in circulation trade strictly based on the demand/supply dynamics.

So AMJ currently trades at a 2.3 percent premium to its net asset value, a premium that would vanish if share issuance resumed or potentially turn into a discount in a heavy selloff. The AMJ has a 4.6 percent 12-month yield and the same 0.85 percent expense ratio. Its $5.9 billion in assets likely placed too much of JP Morgan’s capital at risk in hedging activities for the bank’s taste, though of course it still stoops to collect its fee now that share issuance has been suspended.

Also out there is the ETRACS 2x Monthly Leveraged Long Alerian MLP Infrastructure Index ETN (NYSE: MLPL) designed to double the daily return of the underlying index. It boasts a tempting 8.6 percent annualized current yield and the unadvertised likelihood of crippling any portfolio unlucky to hold it during a correction. UBS is also the issuer of the ETRACS 1x Monthly Short (NYSE: MLPS), which promises the inverse of the Alerian MLP Infrastructure Index, and consequently leaves investors on the hook for the distributions made by index components. The MLPS also has a tiny $5.2 million asset base, so speculators can expect little liquidity and wide bid/ask spreads.

Until AMJ resumes issuing new shares, MLPI is the best bet for an MLP investor looking for diversification via a single ticker. In a tax-deferred retirement account, it preserves almost all of the tax benefits of an individual MLP. And while 0.85 percent for a passive proxy is no great shakes, in this specialized niche that appears to be the nearly universal cost of doing business.

This is not the first discussion of the merits of ETF vs ETN for MLPs. I do wish that the discussion here would take a more consistent approach. The last discussion recommended AMLP as the preferred vehicle since concern about default of the underlying ETN issuer is real in today’s markets. It is concerning that AMLP remains a recommended security and you refer to it as seriously flawed. Please provide straight forward recommendations on ETFs/ETNs in the MLP sector. Are any of these a buy or should they be avoided? Should any be held only inside a tax deferred account? My impression from this review is that you are not high on AMLP. If you are not please state it directly NOW and let’s avoid LINE type discussions after the fact.

I was not party to any discussions that took place before I took over the publication in May, but I’d hoped to make plain in the article that I prefer ETNs to ETFs and in particular relatively liquid ETNs that have not suspended share issuance, which leaves us with MLPI. Issuer credit risk for UBS is modest.

With all due respect, for the publications you are guiding I think you should make an attempt to understand what was previously recommended and why before telling your customers to make changes. Confidence in any recommendation is reduced when the reader is “whipsawed” with changes with no clear reason other than preference. It is not easy nor desirable to continually make changes to portfolios from a tax, time and gain/loss perspective.

For the record, if you are seeking to be plain about recommendations I would prefer a simple “sell this security and buy this security” and provide the price points that you think are appropriate.