So Long, and Thanks for Nothing

If Nabors Industries (NYSE: NBR) isn’t the most hated company in America, it’s only because most Americans have never heard of it.

But it’s a strong contender for the dubious distinction of the stock most hated by its own shareholders, with good reason. The price is down 70 percent in five years and 11 percent since the conclusion of the latest fleeting relief rally in May.

And its board of directors has seen fit to reward this performance with a $100 million golden handshake for the last CEO and a $60 million lump sum for his replacement in exchange for giving up potentially richer long-term incentives that, by the look of things, he was unlikely to ever earn.

We’ve stuck with our predecessor’s pick because, hey, it’s cheap, and did show signs of mounting a comeback in the first half of the year.

But investors with infinite patience tend to burn through their finite capital all too quickly, and our limit has been reached in the wake of the latest profit warning by the company.

After reporting the latest quarter of disappointing results three months ago, the $60 million CEO insisted that “despite these challenging conditions, we are encouraged by the increasing visibility of a meaningful improvement in our results later this year.”

Uncompetitive companies tend to blame their disappointments on factors beyond their control, but they also eventually tend to get new leadership that takes responsibility for the bottom line.

Unfortunately, Nabors directors appear to represent the interests of corporate insiders rather than shareholders. Last month, they refused to accept the resignation of two board members who got less than half the votes when they stood for reelection. The board also refused to give large shareholders the power to nominate their own board candidates, even though a majority of voting shareholders approved the proposal. Instead, Nabors hid behind a Bermuda governance provision that allows companies to count any votes not cast as opposing unwelcome proposals. Clearly, it knew what it was doing when it picked its offshore domicile.

Continuing to hold stocks losing market share because they’re cheap is not a viable strategy; it’s a recipe for ending up with a portfolio full of value traps. Despite the apparent cheapness, I personally wouldn’t touch Nabors shares with a 10-foot pole, and can no longer recommend that you wait for a turnaround, seeing as the leadership that drove the stock into a ditch remains entrenched. Sell NBR.

Nabors isn’t the only portfolio holdover from the previous team not performing as hoped. European oil majors Total (NYSE: TOT) and Eni (NYSE: E) retain small overall gains in the Conservative Portolio but have been relentless drags on performance this year and no longer deserve to be bought. We’re downgrading TOT and E to Hold. 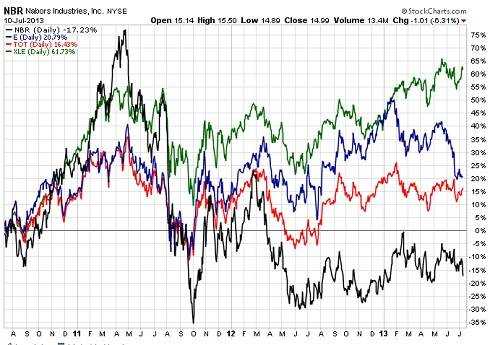 Moreover, this isn’t the sort of Hold were we’re happy to hold on to a winning position that’s exceeded its buy point. Rather, this is the kind of Hold that precedes a Sell, which will be forthcoming if performance doesn’t quickly improve.

If the stock charts of Eni and Total can’t come up for air with oil prices rallying and Brent trading above $108 a barrel, one wonders what they might do when in a less favorable commodity environment.

Until now, we’ve stood behind these names based on their modest valuation and the knowledge that all European equities trade at a hefty discount as a result of the Eurozone financial crisis. But this crisis shows no signs of abating any time soon; in fact since the fundamental causes have not been resolved it could intensify anew at any moment, and very likely after the German elections in September.

Both companies have downstream operations that will be saddled with weak domestic demand for years to come as Europe suffers through a lost decade. And their refineries are far from the North American shale basins overflowing with discounted crude, so will remain a costly drag on earnings.

If all this sounds like an argument to sell, realize that you’ll be selling low. But we’ll be right behind you of the stocks continue to struggle, and may also get out on any near-term relief rally. There are better opportunities out there.