Don’t Be Too Quick on the Draw

When crude oil rallies more than 13 percent in three weeks to the highest price in well over a year, and when the differential between two of the most widely followed global benchmarks abruptly shrinks from more than $6 to $2.50 over the same span, I want to understand why.

\Unrest and the coup in Egypt are partly responsible. While country is not a major crude producer, it does control the Suez Canal and a key oil transshipment pipeline, which together transported 2.2 million barrels a day of crude in 2011, accounting for some 2.5 percent of the world’s daily use. Perhaps more significantly, Egypt is the most populous Arab country, and its armed forces were a linchpin of the authoritarian order that prevailed in the region before Arab Spring began toppling dictators.

But while jitters over stability in the Middle East during the world’s peak energy demand season are understandable, they hardly explain the rapid appreciation of domestic crude, which never need cross the Suez, relative to Brent, the global benchmark.

This has been blamed on progress in moving crude previously trapped near the Mid-continent hub at Cushing, Oklahoma down to the Gulf Coast, where big and efficient refiners have ramped up production and exports. In addition, slowing growth in China and other emerging markets has been thought to have restrained Brent prices.

But Wednesday’s big gain was fueled by a new factor: suspicion that domestic demand is picking up based on the huge 9.9 million barrel draw in crude inventories reported by the Energy Information Administration (EIA). That brought the draw over the last two weeks to a record of more than 20 million barrels, to an admittedly still monumental 374 million barrels, near the very top of the five-year average inventory range. 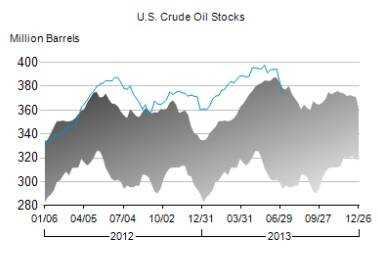 That conclusion seems premature. Start with the fact that weekly refined product supply data tends to be volatile, and even more so in the summer when demand peaks. On the whole, four-week supply was up 1.6 percent year-over-year but down for example from the first week of July in 2010, which did not translate into any sort of a long-term pickup.  And while gasoline inventories declined by 2.6 million barrels to 221 million, the remaining stocks are still “well above the upper limit of the average range,” according to the EIA.

As for that dramatic 20 million barrel crude draw over the last two weeks,  I compared the EIA’s “petroleum balance sheet” for the latest week to the one from two weeks ago, when inventories stayed nearly constant, to figure out what factors drove the last week’s big draw.

The main difference, accounting for roughly half of the draw, was a decline in imports. Refiners had excellent incentive to  shun West African light sweet crude, for example, in favor of the ample domestic supply of similar grades that’s now more accessible than ever and that much easier to move to the Gulf Coast.

Another quarter of the difference was down to the increased refinery runs. I believe these reflect less rising demand than refiners’ haste to beat price hikes on crude and the looming maintenance schedule. Certainly, dropping retail gasoline prices are not a great sign of stronger demand. 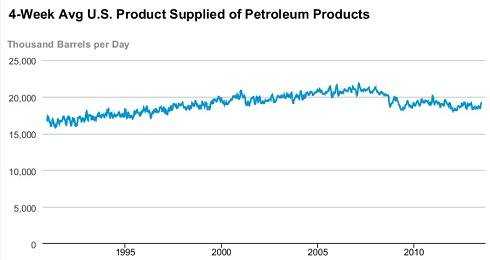 And what accounted for the final quarter of the big draw seen last week versus the steady inventories of two weeks ago? That’s down to something EIA calls Adjustment and what it formerly labeled Unaccounted-for Crude Oil, in any case a balancing item. In other words, a quarter of the inventory drop cannot be explained by either the lower imports or the increased refinery runs.

Maybe crude, whose export is tightly restricted, is sneaking out of the country in the dead of night, or maybe the refinery runs are understated or the inventory drop understated. In any case, statistics are never exactly right.

What’s clear is that the market heard the story it wanted to hear on Wednesday.  But then again it heard what it wanted to hear five years ago, when $140 crude coexisted with the subprime crisis for a while. That certainly didn’t last.

The US economy is clearly in a very different place today than it was then. But the situation in emerging markets then and now is quite comparable. Eventually, their diminished growth trajectory will have its day in the crude trading pits. By then, we’ll know more about any incipient change in US demand. But all we know after today is that the market is looking for reasons to take oil prices higher.