The Richest Seam in Coal

Top coal miner Peabody Energy (NYSE: BTU) reported quarterly results early yesterday, and while the beaten down stock has already coughed up the resulting relief rally, Peabody did provide several positives for some of the industry’s healthier plays.

Notably, China and India continue to see big gains in coal demand, while low prices are expected to idle more unprofitable US and Australian mines by the end of the year. The CEO was also upbeat on the US thermal market, reporting that the use of natural gas to generate electricity is down 15 percent year-over-year while coal generation is up 11 percent as coal wins back the market share lost to dirt-cheap natural gas last year.

Of course, Peabody is too big and too exposed to global demand to benefit as much as others from the favorable domestic trends. It’s also among those shuttering loss-making mines, while nimbler competitors ramp up production in the most cost-advantaged basins.

The best bet among those is Alliance Holdings GP (Nasdaq: AHGP), a master limited partnership we’re adding to the Growth Portfolio.

Alliance Holdings is the general partner of the thermal coal mining MLP Alliance Resource Partners LP (Nasdaq: ARLP). ARLP is only the sixth-largest US producer and last year it accounted for just 3.4 percent of the national output, roughly one-sixth of Peabody’s contribution.

But it enjoyed much higher margins thanks to its concentration in the lower-cost basins, an advantage that’s helped Alliance weather the industry’s recent slump while meaningfully increasing its market share and distributions. 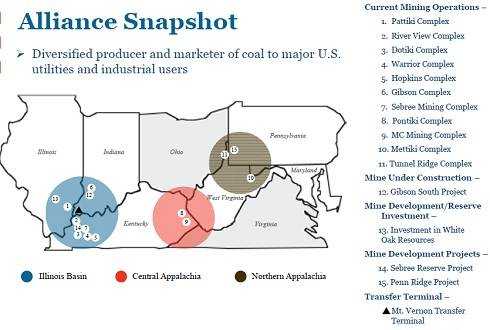 Alliance’s mines in northern Appalachia and the Illinois Basin are the lowest cost producers in the Eastern US, well placed to capture market share from natural gas at gas prices even well below current levels. Under the leadership of Oklahoma billionaire Joseph Craft III, Alliance has made profitable investments that have grown its production and distributions to limited partners.

Output grew from less than 26 million tons in 2009 to an expected 39 million tons in 2013. ARLP’s distributions per share have also increased by roughly 50 percent in that time, and are expected to approach $4.50 per unit this year. 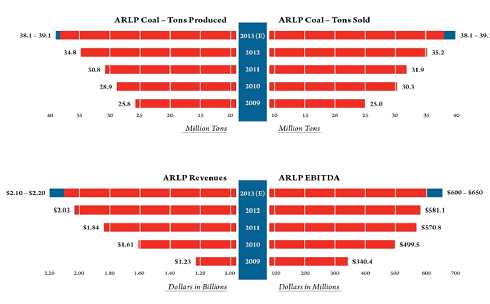 Alliance has been growing its top and bottom lines even as US coal prices plumb multi-year lows. It operates 11 underground mines in Illinois, Indiana, Kentucky, Maryland and West Virginia, is building a 12th in southern Indiana and is an investor in another new mine in southern Illinois.

The vast bulk of the output is sold to utilities under long-term contracts with periodic price adjustment provisions. Louisville Gas & Electric and Tennessee Valley Authority accounted for 28.5 percent of Alliance’s revenue last year.

Alliance operates entirely with a non-unionized workforce and believes its workers’ productivity is a competitive advantage.

That growing income stream supports AHGP’s current 4.9 percent yield, and its 21-quarter streak of distribution increases. The most recent one in May represented a 3 percent hike from the prior quarter and a 14 percent rise year-over-year. IDRs should account for well over half of ARLP’s distributions to AHGP this year. 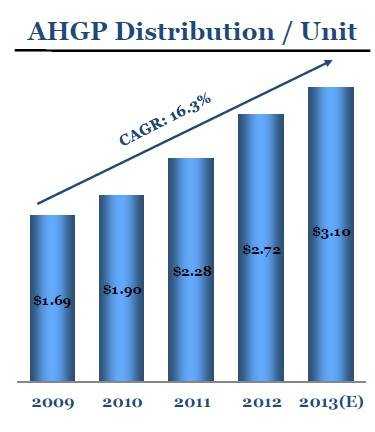 The underlying business is strong and improving. In its most recent quarter, ARLP reported a 15 percent output gain year-over-year, and a 23 percent revenue gain thanks to higher selling prices. Meanwhile, its mining costs per ton of coal declined, fueling a 32 percent jump in earnings before interest, taxes, depreciation and amortization (EBITDA). The partnership said it is likely to finish the year at the upper end of its prior guidance range for sales and profits. The partnership is scheduled to report the latest set of quarterly results Friday.

On the April conference call, Craft noted improving market trends as utilities switch back from natural gas to coal. “Even with a sluggish economy, we believe these favorable market fundamentals for domestic thermal coal will result in higher spot prices in the second half of the year, as utility stockpiles are drawn down toward historically normal levels. This should bode well for growth in revenue in 2014,” said the CEO.

Even in the absence of higher prices, Alliance’s investments in new mines should boost affiliated production by up to 20 percent over the next two years.

More encouragingly still, this is not growth financed by spiraling debt. Alliance Resources boasts a debt-to-trailing-EBITDA ratio of 1.3, versus 2.7 for coal MLPs and 3.9 MLPs as a whole.

The combination of low leverage, solid yield, profitable growth and improving industry fundamentals marks Alliance as a winner, and Alliance Holdings is poised to benefit disproportionately thanks to its incentive distribution rights. Buy AHGP below $68.