Mid-Con Energy Partners Is No Con

Mid-Con Energy Partners LP (Nasdaq: MCEP) was formed in July 2011. The company’s strategy is “to own, operate, acquire, exploit and develop producing oil and natural gas properties in North America, with a focus on the Mid-Continent region of the United States” and further to “focus primarily on enhancing the development of producing oil properties through waterflooding.” 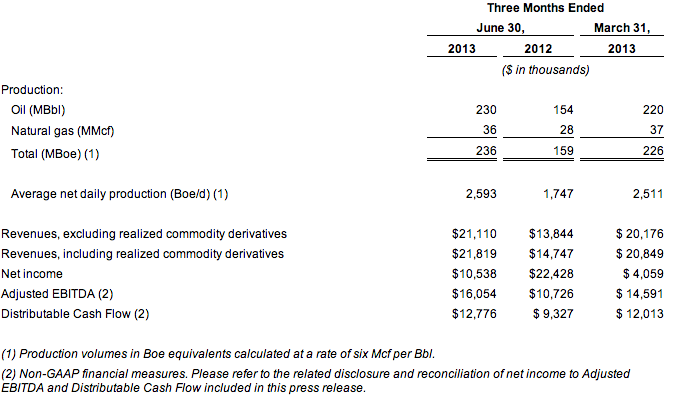 MCEP managed to increase net daily production by 48 percent compared to Q2 2012, with 97 percent of the company’s production consisting of oil. The high fraction of oil production distinguishes MCEP from many of its competitors, and the quarterly results were strongly influenced by West Texas Intermediate (WTI) pricing that held up well during the quarter, even as the price of Brent crude weakened significantly.


During the latest quarter, MCEP announced that it acquired additional interests in existing Mid-Con Energy waterfloods for approximately $28 million. The transaction included a 60 percent working interest in Mid-Con Energy’s Cushing Field and various working interests in select southern Oklahoma waterflood units. The acquisition added an estimated 1.33 million barrels of oil equivalent (BOE) to MCEP’s proved reserves, of which 98 percent is categorized as oil. This means these assets were added at a cost of only $21.48 per proved barrel of oil.

Exposure to commodity pricing is always a concern with production related partnerships, but MCEP has attempted to ensure more predictable cash flows by hedging a majority of its production. MCEP’s hedging program objective is to protect its ability to increase its quarterly distribution over time, while maintaining some flexibility to benefit from upward movements in oil prices. For the second half of 2013 MCEP has 78.5 percent of its estimated production hedged at $98.30 per barrel, and for 2014 70.3 percent of estimated production at $93.56 per barrel. (The price of WTI for September delivery is presently $104 per barrel.)

MCEP had suffered collateral damage from the Linn Energy (Nasdaq: LINE) mess even though it is far less leveraged than Linn and carries very little debt relative to its cash flow and market cap. However, shares have recovered nicely since the dust settled, and have gained 10 percent over the past month. The units currently yield 8.7 percent and are still attractive at today’s price.

Last week, the US Department of Energy approved a third major project seeking to export liquefied natural gas (LNG) from the US to Japan and Europe. This time the lucky applicant was Growth Portfolio holding Energy Transfer Equity (NYSE: ETE) which hopes to ship up to 2 billion cubic feet of natural gas per day from its LNG storage complex at Lake Charles, Louisiana.

Although the project must still be reviewed and greenlighted by the Federal Energy Regulatory Commission, the DOE approval was crucial and will permit ETE as well as its venture partner BG Group (NYSE: BG) to proceed with construction planning and financing negotiations. More approvals for similar projects are waiting in the wings as US allies press to share in the bounty of the cheap natural gas extracted from shale with the aid of hydraulic fracturing.


Construction of the three liquefaction trains is expected to begin in mid-2015 and the project is due to enter service four years later.

According to Energy Transfer, “BG Group will have exclusive rights to the full export capacity (with renewal rights) on a tolling basis and oversee the design and construction management of the potential project. Additionally, BG Group will continue to retain contractual rights for import capacity of the facility.”


On last week’s conference call with analysts, Energy Transfer executives noted that unlike the two prior projects granted approval, their facility already has pipeline connections, somewhat reducing the project’s scope. They also said that like LNG rival Cheniere Energy (NYSE: LNG) they are likely to seek an equity investor (Cheniere’s is the Blackstone Group (NYSE: BX)).

As for the distribution of economic interest among the partnership’s affiliates, ETE has a 60 percent share, while Energy Transfer Partners (NYSE: ETP) retains a 40 percent stake. Both partnerships should also benefit from the increased natural gas shipment volumes the project will require.

ETE remains a Buy below $69 while ETP has just been downgraded to a Hold based on its relatively less attractive growth profile.
— Igor Greenwald