After the incredible run in 2012, refiners got hit with bad news from several directions in 2013. One of the issues was the increasing cost of compliance with the Renewable Fuel Standard (RFS).

The Energy Policy Act of 2005 created a Renewable Fuel Standard (RFS) requiring 7.5 billion gallons of renewable fuel — primarily corn ethanol — to be blended into the fuel supply by 2012. But the ethanol industry overbuilt capacity, so the US government expanded the ethanol mandate with the Energy Independence and Security Act (EISA) of 2007.


The structure of the RFS2 set up some future problems. If gasoline blenders failed to comply with the mandated volumes (based on the volume of gasoline they sell in the US) they were required to buy credits called Renewable Identification Numbers (RINs) to make up the shortfall.


But Americans are burning less gasoline than we used to, so meeting the EPA’s ethanol mandate would require a higher ethanol content than the current allowable maximum of 10 percent in regular unleaded.


This created a so-called “blend wall” that forces refiners to blend amounts of ethanol that would only be possible if the 10 percent limit were exceeded. Difficulty in complying with the mandate caused the cost of RINs to soar by 3,500 percent during the first six months of 2013, costing refiners a bundle and hurting their share prices.


Valero recently pegged its cost of complying with the mandate at $800 million this year — equal to 20 percent of 2012 operating income. 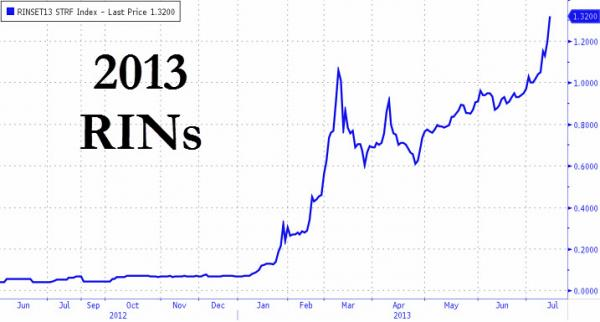 However, last week refiners caught a small break when the Environmental Protection Agency (EPA) slightly softened this year’s mandate. The EPA recognized that too little cellulosic ethanol is being produced to meet that renewables sub-category’s special mandated volume, and it slashed the mandated cellulosic blending volume from 14 million gallons to 6 million gallons. (The original RFS2 called for a whopping 1 billion gallons of cellulosic ethanol to be blended into the fuel supply in 2013, but this amount had been reduced previously). The EPA further extended the compliance date for the total 2013 ethanol mandate of 13.8 billion gallons by four months, to June 30, 2014.But perhaps most importantly, the EPA announced “that it will propose to use flexibilities in the RFS statute to reduce both the advanced biofuel and total renewable volumes in the forthcoming 2014 RFS volume requirement proposal.”


Prior speculation had refiners buying up as many RINs as possible to ensure they met their mandates, and this had driven up the price of the RINs. The idea that the EPA is willing to bend on the mandated volumes was enough to cause the price of RINs to fall by 20 percent shortly after the announcement was made.

This solution is better than the status quo for the refiners, but falls far short of what they really want, which is a repeal of the RFS. The refiners are still on the hook for the 2013 mandates, but the cost of compliance will now be a bit lower and they have a bit more time to comply. But any celebration is premature, as the RFS will continue to take a toll on refiners’ profits.


Valero will fare better than most because it owns ethanol plants with a capacity of 1.2 billion gallons. This will cover the majority of ethanol Valero needs to blend into its estimated 17 billion gallons of annual gasoline production. Still, even Valero considers the current RFS to be problematic, and has expressed their desire to see it repealed. A total repeal is unlikely, in my opinion, and refiners will continue to see profits dragged down as a result, although some (like Valero) are somewhat hedged thanks to their own ethanol production.