Typically this late in the summer, retail gasoline prices would have been falling for several weeks. This year, they rose sharply in July on the back of stronger prices for West Texas Intermediate (WTI) crude oil. Recent indications are that gasoline prices are finally on the way back down, but their extended summertime strength led to a number of headlines asking whether President Obama’s policies have contributed to the high prices.


The Pew Research Center conducted a poll in July asking, “Can a president control gas prices?” The answer (unsurprisingly) is that it depends on whom you ask, and when. Perhaps surprising is that a majority of Republicans polled believed that presidents have a lot of control over the price of gasoline. In a poll conducted while President Bush was in office, 54 percent of Republicans voiced this belief. During Obama’s second term, 69 percent of Republicans agreed.

Democrats, on the other hand, had an even greater change of heart. During Bush’s second term, 71 percent of Democrats polled felt that the president has a lot of control over gasoline prices. During Obama’s second term, the proportion of Democrats agreeing with that statement fell to 41 percent. 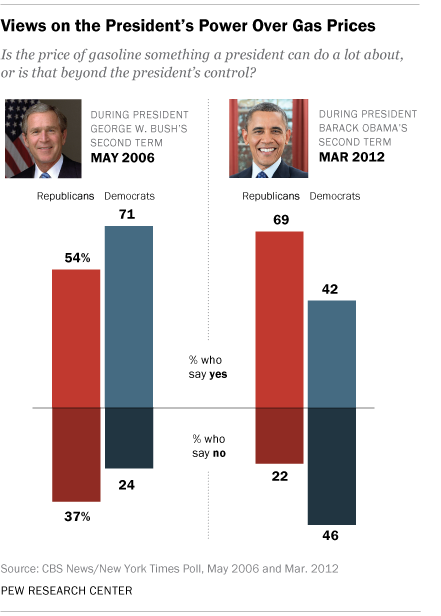 
But I will give you the longer answer, which explains the sort of influence a President can have. The reason I typically couch the answer in terms of a “sitting President” is that policies can certainly influence project decisions that will in turn affect the oil and gas production, but those usually take years to have a meaningful effect on supply. Consider the following graphic: 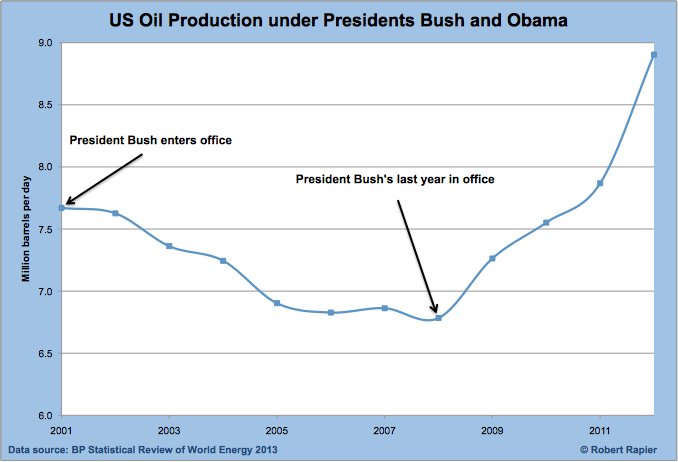 What this really illustrates is that the oil and gas markets move in response to supply and demand, and not presidential fiat. One reason oil production in the US fell under President Bush was that prior to 2005 prices hadn’t been high enough to incentivize sufficient investment in the US oil industry. By 2005, high prices spurred record investments by oil and gas companies into the development of new projects.

High oil prices also made previously marginal tight oil formations like the Eagle Ford in Texas and the Bakken in North Dakota economical for the first time.

Or go back further to the presidencies of Richard Nixon and Jimmy Carter. In 1973 President Nixon pushed through the Trans-Alaska Pipeline Authorization Act, which cleared away legal challenges from environmentalists seeking to stop construction of the pipeline.

Projects require time to be proposed, approved and executed. There is a multi-year lag between policy decisions or price signals and subsequent changes in production. Because of this lag, politicians sometimes claim or receive credit for production increases that had nothing to do with their particular policies.


The other major factor here is that the oil market is a global market. While the rapid expansion of US crude oil production has depressed prices relative to global markets, prices are still heavily influenced by what consumers in China, India or Europe are willing to pay.

US crude production is up and US crude consumption is down. Yet consumers are still paying near record prices for gasoline because of the high and growing global demand. The President can’t change that.


There are two ways that a President could at least temporarily curb gasoline prices, neither of which would be likely to garner widespread support. One would be to press Congress to modify the federal gasoline tax, which has been stuck at 18.4 cents per gallon for 16 years. Reducing the tax would likely have a small positive effect on demand, partly negating the price break for consumers. On the other hand, raising the gasoline tax as has often been proposed by environmentalists would be even more difficult, and a substantial increase could probably take place only as part of a major tax code overhaul.

More plausibly, a President could declare an emergency and release oil from the Strategic Petroleum Reserve (SPR), as President Obama has already once tried. Presidents have used the SPR many times in an attempt to manipulate prices, but the effects to date have been fleeting.


The lesson here is that the energy policies President Obama is pursuing today are unlikely to affect oil or natural gas production for several years. There are substantive discussions to be had about President Obama’s energy policies, and how they will affect the US in the coming years. Blaming him (or any sitting president) for high gasoline prices is not part of that substantive discussion.

Parting Ways With the Tortoise

Our investment in Tortoise Energy Infrastructure (NYSE: TYG) has nearly doubled in total return in six-plus years, so we can’t complain about the results.


But we can complain about the very premise of a closed-end fund for MLPs, most of which owe corporate income tax on their holdings distributions and thus give up the primary tax benefit of MLP ownership. Like other closed-end MLP funds, Tortoise attempts to compensate by employing modest leverage, a strategy that can backfire should rising rates discount the entire asset class.

We like that Tortoise is most heavily concentrated in some of the individual partnerships we recommend in The Energy Strategist, but we would much rather subscribers owned the MLPs directly and received the full tax benefit. TYG is a Sell from the Conservative Portfolio on this basis.