Why Coal Is Still King

Here in the US, we unsurprisingly tend to think of the energy markets in a US-centric fashion. Ask someone about the coal market, and they may describe coal as a fuel in decline. In fact, if you look at US coal consumption over the past ~50 years, that view would be supported. 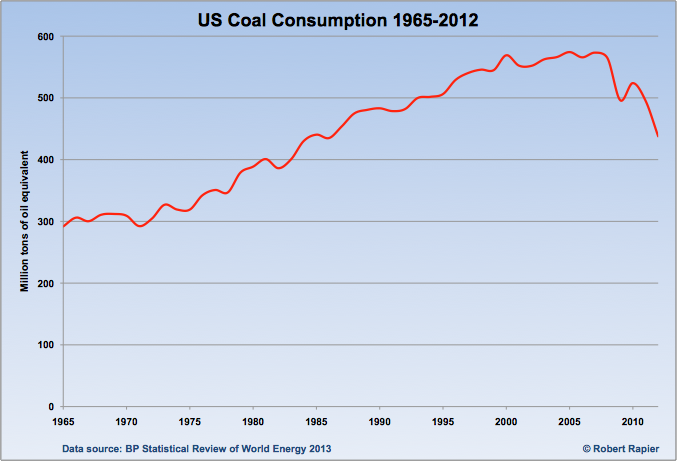 After growing steadily during the 1970s, 80s, and 90s, coal consumption in the US slowed, and then plunged 24 percent from 2007 to 2012. The reasons for the recent decline are well-documented, but the single biggest factor has been the electric power industry shifting from coal to cleaner-burning natural gas. Between 2008 and 2012 the fraction of electricity derived from burning natural gas in the US rose from 20 percent to 30 percent, while coal’s share declined from 48 percent to 37 percent. (Expect coal’s share to rebound slightly this year as a result of higher natural gas prices.)

But when it comes to the global coal market, top consumer China tells an entirely different story. Despite plummeting demand in the US, global coal consumption reached an all-time high in 2012, according to the BP Statistical Review of World Energy 2013. That was entirely because of increased coal burning in China, which trumped reduced use by the rest of the world. 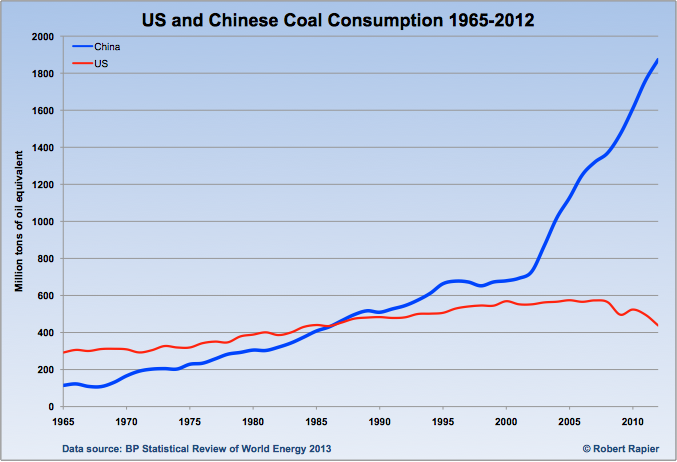 In 2012, global coal consumption increased by 101 million tons of oil equivalent (Mtoe). (The use of “oil equivalents” standardizes the different grades of coal and also allows easy comparisons with other energy sources.) To put that number into perspective, global oil consumption only increased in 2012 by 49 million tons of oil. Thus coal continues to be the fastest growing fossil fuel globally.

China’s increase alone was 112.5 Mtoe. India added another 27.7 Mtoe, but no other country experienced a consumption increase above 10 Mtoe. If not for China, the world would have seen coal consumption decrease by 11 Mtoe in 2012.


But other, mainly richer, European countries posted big percentage decreases in coal consumption over the last five years. Among them was Denmark (a 47.6 percent decrease), Finland (down 34.3 percent), Austria (-33.8 percent) and Sweden (-33.2 percent). Iran saw a 33 percent drop. The US is 8th on the list with a 24 percent decrease in coal consumption over the past five years.


In a nutshell, this describes the challenge in reducing global coal consumption. The bulk of coal is both produced and used by developing countries. Their production and consumption is growing, while that in developed countries is generally shrinking. Demand in Asia Pacific has more than doubled over the past decade despite the fact that the price for Asian coal more than tripled over that time span.

As for the US, we do have the world’s largest coal reserves. The US has 28 percent of the world’s coal reserves, enough for 257 years of US consumption at the current pace. Given declining US consumption, US coal producers have stepped up exports, and are seeking to expand coal export capacity from the Pacific Northwest to tap into Asia’s growing consumption.


However, there are many obstacles in place, both domestically and internationally. Domestically, environmentalists will pull out all the stops in trying to prevent this coal from being exported. Internationally, Southeast Asia is a very competitive market given the proximity of major coal exporters Australia and Indonesia. Australia is the world’s top coal exporter, with nearly 90 percent of its total exports destined for Japan, China or South Korea.

Globally, China will likely continue to dominate the coal markets, but India is poised to match China’s rapid consumption growth in coming years. In the US, on the other hand, coal’s days as a growth industry are probably over.

Shares of Growth Portfolio holding American Railcar Industries (Nasdaq: ARII) suffered a nasty and ill-timed spill soon after we climbed aboard this spring, on concerns that the crude-by-rail boom was slowing down.


Industry backlog did ease up a bit, but by the end of June was at the highest level in six years, equivalent to nearly 18 months of this year’s production, according to data from ARII.

As for company-specific results, the earnings ARII reported at the end of July easily topped Wall Street’s consensus, and margins expanded significantly year-over-year as ARII delivered more of the higher-value tank cars. Demand for these is expected to remain strong for the foreseeable future as shale oil drillers look to transport their output to distant refineries. Meanwhile, orders for hopper cars and non-crude tank cars are picking up after a springtime lull.


ARII is cheap on both a cash flow (at 5.4 times trailing Enterprise Value/Ebitda) and earnings (8.7 times calendar 2014 estimates) basis, and offers a 2.7 percent interest yield to boot while shareholders wait for the next move by majority owner Carl Icahn. There has been no insider selling other than a $700,000 sale by the CEO near the March highs.

The stock appears to have completed its correction, reclaiming its 200-day moving-average. We’re upgrading ARII from a Hold to a Buy below $40.

If the demand for coal is steadying, why hasn’t Arch Coal shown any increase?

They are in the same boat as Peabody. US demand is contracting sharply, and they are forced into the export market, which doesn’t have nearly the same margins. Demand is up a bit this year over last year because of higher natural gas prices, but the long-term outlook is rocky. Thus, the company has been pummeled along with Peabody.