The Energy Information Administration (EIA) recently released its International Energy Outlook 2013 (IEO2013). While the EIA doesn’t have a sterling track record for predictions, many organizations — including energy producers — make decisions at least partially based on EIA projections. Therefore the organization’s forecasts are worth reviewing.

IEO2013 projects that world energy consumption will grow by 56 percent by 2040, with most of the growth expected in developing countries. Energy use outside the Organization for Economic Cooperation and Development (OECD) is projected to increase 90 percent, while energy use in OECD countries is expected to rise just 17 percent over the next 27 years.

Renewable energy and nuclear power are forecast to be the world’s fastest-growing energy sources, with each increasing globally by a projected 2.5 percent per year. Despite this growth, fossil fuels are still expected to supply almost 80 percent of world energy use through 2040. Growth in supplies of tight gas, shale gas, and coalbed methane will make natural gas the fastest-growing fossil fuel, while Chinese coal consumption should ensure that coal usage grows faster than petroleum consumption through at least 2030. The projected growth is expected to increase global carbon dioxide emissions 46 percent from current levels by 2040.

These two countries are also forecast to be two of the five non-OPEC countries making major contributions to petroleum supply growth in 2040. This would be good news for many of the US oil producers in the portfolios, as well as for stubborn shareholders hanging on to Petrobras (NYSE: PBR) shares in hopes of a turnaround. The other three countries forecast to make major contributions to growth in petroleum supplies are Canada, Kazakhstan, and Russia. 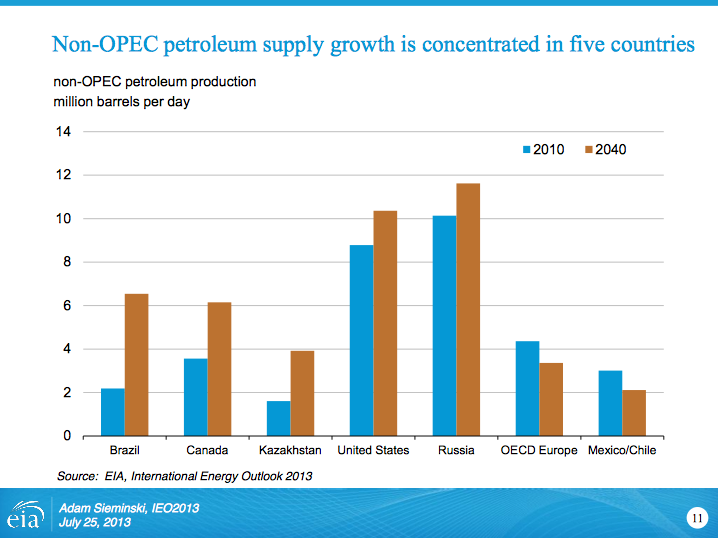 Global consumption of natural gas is forecast to grow by 64 percent by 2040, from 113 trillion cubic feet (tcf) in 2010 to 185 trillion tcf in 2040. This increase will be dominated by growth in the industrial and electric power sectors, which are forecast to account for 77 percent of the expected increase. Growth is expected to take place in predominantly non-OECD countries. 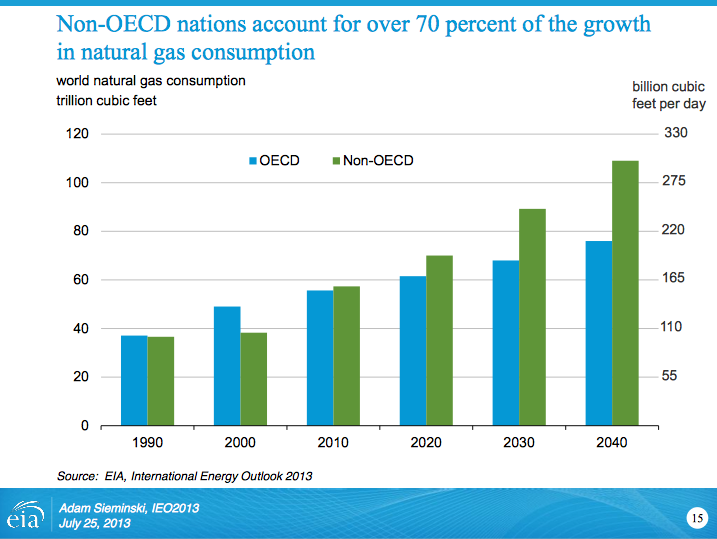 Global coal consumption is forecast to rise at a rate of 1.3 percent per year until 2040. Coal consumption is expected to increase at an average rate of 1.8 percent per year in non-OECD countries (dominated by consumption growth in China and India) while declining by 0.2 percent per year in OECD countries. The three largest global coal consumers — China, the US, and India — are projected to grow their total coal consumption from 70 percent of the world’s total in 2010 to 75 percent in 2040. However, total demand in the US is expected to fall, with a sharp drop by 2016 as new pollution requirements after 2015 contribute to significant retirements of coal-fired generating capacity in the US. While renewables and natural gas are forecast to grow at a faster rate, EIA projects that coal will still command the largest share of global electricity production in 2040. 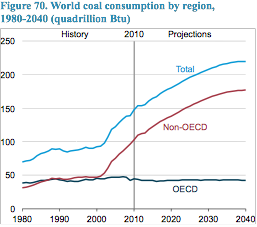 World coal production is expected to increase from 8 billion short tons in 2010 to 11.5 billion short tons in 2040. Coal production is expected to be concentrated in four countries — China, United States, India, and Australia — and in some other countries of non-OECD Asia such as Indonesia. Coal production is expected to grow strongly in China, slowly in the United States, and to steadily decline in OECD Europe. As a result, the US coal industry will increasingly look to exports for growth. Because the US has the largest global share of coal reserves, the US may eventually become an increasingly important supplier of coal to the Asia Pacific region, but prospects in the short-term continue to look bleak for US coal producers.

Globally, renewable electricity is forecast to grow faster than any other electricity source with an average annual increase of 3.3 percent through 2040. Renewables are expected to lead growth in electricity production in OECD countries while ranking second behind nuclear power in non-OECD countries.

Some readers may think I carry on about China too much, but the reason is that I think China will be the single-most important factor influencing energy markets in the future. After all, without China’s huge growth spurt in recent years, would we really expect oil prices to be over $100/bbl? To illustrate China’s potential impact, consider the projected energy consumption of what I expect to be the three largest energy consumers through 2040: 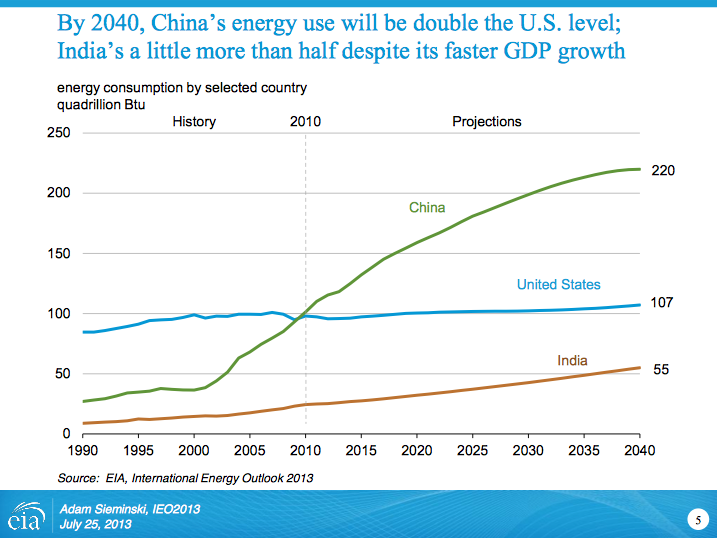 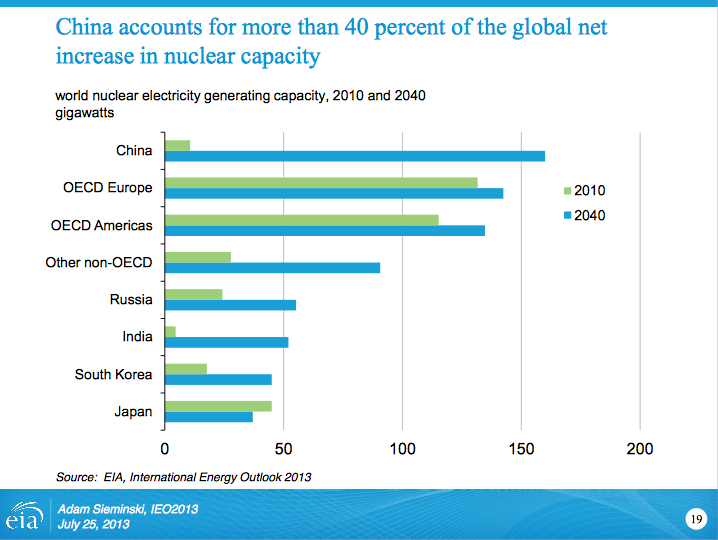 But supplying China’s energy will create major ripples in the energy markets. There will be opportunities as well as threats as Chinese companies aggressively pursue projects around the globe. In recent years China made deals to develop oil fields in Iraq, signed contracts with Hugo Chavez, and got into a bidding war against ExxonMobil (NYSE: XOM) in Ghana. China is going to be everywhere there is competition for energy supplies, and it will continue to have an enormous impact on practically every energy source that is globally traded.

Readers can rest assured that we will continue to closely monitor China as well as all the major international energy players for opportunities, as well as threats that might arise to portfolio companies.


In upcoming issues of The Energy Strategist, we will take a deeper dive into some of specific projections by the EIA, highlighting investment opportunities that may arise.