Just as the Washington Nationals and Baltimore Orioles have seen their fortunes reverse once both teams embarked on an innogration strategy to improve their once moribund rosters, so too have some of the legacy tech companies gone through a period of decline and recovery after recognizing how much the game has changed.

When most people think about Microsoft (NSDQ: MSFT) and Intel (NSDQ: INTC) they tend to focus on the bygone golden days of the personal computer (“PC”). Back then there were seemingly never enough PCs, and Microsoft and Intel complimented each other perfectly. Intel largely stuck with manufacturing the chips while Microsoft made the software that ran on those chips.

This correlation was not a coincidence and was something each company worked very hard to build and maintain. Both companies shared the breakthroughs in speed and function with each other before they announced them to the public so they could both release together their technological exploits. In a very real sense they were in effect doing joint development together.

The net result was the market performance was similar for both companies. As the PC peaked a decade ago both companies were caught flatfooted as mobile technologies became increasingly popular and more robust. They both viewed Apple’s (NSDQ: AAPL) move into iPod supremacy as a niche market and not the core of the future mobile computing juggernaut which iPad and the iPhone quickly became.

Both Intel and Microsoft saw their stock drop and then stay at the same levels for almost a decade as Apple rose to its position as the world’s most valuable publicly traded company. A few years ago we saw the number of PCs begin to decline and then accelerate due to Tablet and Smartphone sales. Finally, both companies awoke from their lumbering halfhearted attempts into what they saw as small market tech and get very serious about the future in Mobile and Cloud computing.

If you have read our previous articles on what happened in the prior tech wave in mass production – specifically automobiles – you know that Ford and General Motors swapped leadership positions. More importantly, they stayed around the goal so that their sales cash flow could enable them to maintain a virtual lock for the top two spots from the early 20th century to the 1970s when that tech core ended as the dominate new technology for the economy.

Though both Microsoft and Intel appeared to have completely missed the next leg of the tech industries build out – they both still maintained hardy revenue flows which kept them around the goal as Ford and General Motors had done in the last tech wave.

Though it is doubtful that either Intel or Microsoft will see the fruits from their tech investments into Cloud and Mobile for several years, something else more interesting occurred in the marketplace. The rate of decline suddenly slowed for PC sales. The rate of decline is projected to flatten out for the remainder of 2014, noticeably less than its recent rate of around 10% annually (see chart below). 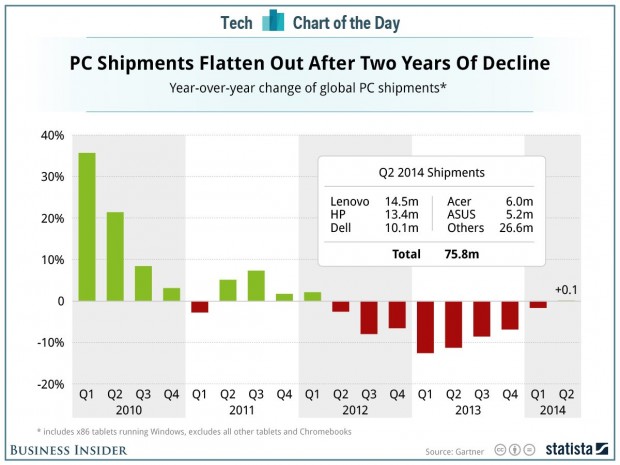 With the dominance both companies have in PC production – all of those PCs will require chips and operating systems in order to run – and the number of units being sold projected at almost 300 million units, this leaves both Intel and Microsoft considerable resources to retool with.

The one area both companies were not suffering from is PC servers. That market has not declined and provides an even larger war chest to retool with on top of their PC desktop and laptop sales. In fact, Tablet sales recently and suddenly slowed as well.

Ironically, Microsoft crossed over from a pure software company to begin manufacturing their own Tablets, and with the purchase of Nokia will start making their own Smartphones to boot. The slowing of this market actually works to both Microsoft’s and Intel’s advantage.

Microsoft, having crossed over into manufacturing ended one of the greatest development relationships in tech history. Further, the change could have a bigger impact on Intel as Microsoft is into far more areas of the Cloud and Mobile.

Before anyone writes off Intel understand that manufacturing of Mobile chips has become split. ARM Holdings (NSDQ: ARMH) created the design for the chips while Qualcomm (NSDQ: QCOM) actually manufactures the chips. Where that relationship worked for Intel and Microsoft in the PC era, it may not work in the Mobile era of computing.

With its upcoming release for new Mobile chips – called Cherry Trail chips – Intel has upped its performance capability considerably. From a purely technological perspective, Intel will be able to perform functions on these new chips which ARM and Qualcomm instead do with software. This may provide the competitive springboard Intel needs to begin making inroads into ARM and Qualcomm’s 90% marketshare they have today with Mobile chips.

We should not lose site of the fact that Intel is still making the PC server chips virtually uncontested today. This provides Intel with all the cash flow it needs to continue to innograte into Mobile chip fabrication. This race is not over by a long shot and even if Intel’s new Cherry Trail chips are a monstrous leap forward – the act of delivering these chips won’t change the market dynamics very quickly as most developers of Mobile software write their code for the ARM designed chips. However, if Intel makes inroads the cash from those sales on top of their Server chip sales will make for a rosy future for Intel even if they are only the number two producer of Mobile chips.

Microsoft, on the other hand, has a different competitive market they need to navigate. As Google recedes from the Smartphone market with their sale of technology and patents to Lenovo the market is already set to shift.

If Microsoft never takes the lead on Smartphones and Tablets and instead moves into the second slot behind Apple, then along with Intel their server sales will generate tremendous revenues. Where Microsoft has the distinct advantage over Intel is in their other efforts such as Cloud. Microsoft has entered into that market behind the leaders but has the cash flow to innograte products which can generate even larger future revenues.

The technological requirements for Cloud are going to grow from the current server-based architectures in the marketplace. The Cloud marketplace is growing from the infrastructure which exists in businesses today.  The upshot being that Public Clouds will not dominate the marketplace anytime soon.

All businesses today have tremendous investments in their current infrastructure. They will not simply dump those investments and move into a public Cloud. The customization of their own software prohibits a dump-and-move dynamic in the marketplace for Cloud. Rather, we will see a gradual shift for businesses from customized infrastructure into more flexible server architectures which will produce more private Clouds and increase hybrid Clouds that companies will leverage to reduce cost and provide greater virtualization of their existing infrastructure.

Interestingly enough, this gradual migration into private Clouds is providing both Microsoft and Intel the market opportunity to again rise as dominate players in Cloud and Mobile. The technologies which Clouds require to scale and remain stable plays into both of these companies’ strengths compared to the new competitors in this space.

What would not surprise us at all would be for us to see Intel and Microsoft again teaming up to develop designs which the piece makers such as ARM do not have the reach and resources to accomplish.

The correlation between Intel and Microsoft could be somewhat akin to the prior tech wave in that they could again become dominate players in Cloud and Mobility computing platforms. As it is right now their stocks have begun moving together again simply based on revenues. That correlation and perhaps even partnerships could grow into a strong position behind Apple as there really are not any large companies which are poised to make this move today.

Intel remains a buy recommendation up to $30.

Microsoft also remains a buy recommendation up to $42.