The “New Normal” for Biotech

The Nasdaq Biotech Index (NBI) tested its 50-day moving average successfully on the week that ended May 15th.  This  is a positive and suggests that the recent correction in the sector is not as big a worry, barring an unforeseen external event. The fact that no major earth shattering news came out of the ASCO conference and that the sector was still able to move higher is also a positive.  Based on the chart analysis, it is plausible to expect a move back toward the top of the recent trading range with 3800- 3900 on NBI as an intermediate term target. 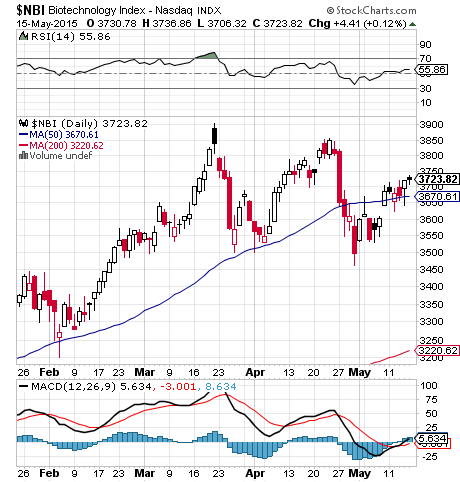 Buy Alert – Buy Bio Rad Labs (BIO).  Bio Rad looks well poised to gain nicely from the current climate in the health care system.  As reimbursements for medications and services continue to get squeezed research companies are investing in equipment, as the race heats up for the next blockbuster drug, highlighting The New Normal paradigm in biotech:  It’s got to be huge or it won’t count.

It’s All or Nothing for Biotech Companies

What we’ve seen in the last twelve months is huge success for companies that have well positioned products.  For example, Gilead Sciences (GILD) has made a mint from Sovaldi and Harvoni with $9 billion in sales in the last quarter.  How did Gilead do it? They developed drugs that, no matter how much they cost, insurers can’t say no to them, despite all the hoopla.  That’s because Hepatitis C, prior to these two drugs, was a guaranteed death sentence to those who suffered from it. The point here is not to be dramatic but to highlight a little noticed factor in the health care system of 2015 and beyond that has yet to be fully fleshed out by the mainstream media and Wall Street analysts.  Resources are tightening up and that means that any new drugs that come to the market and deliver tangible financial results have to live up to a higher standard than before.

So the question to ask of a biotech company these days, regardless of how crass and cynical it may sound, is the following:  Is your product going to make a huge difference, either in terms of quality of life improvement, an increase in function, and/or will it saves life for extended periods of time?  The more that a company can answer yes to the question above, the more likely the chance will be for price appreciation in their stock price.

Enter Bio Rad Labs, a research and clinical testing equipment and product company, which makes the stuff that companies need to do more research faster and makes clinical laboratory testing equipment. The more rapid and accurate the bench work (research) that a company can do, the more likely that they will be able to find, or discard potential products and spend their time and money more productively and efficiently.  On the retail side, the more tests a clinical lab can do simultaneously, the more efficient they are.

On the clinical laboratory side, Bio Rad and Beckman Coulter extended an exclusive contract on a combines HIV (AIDS) and HCV (Hepatitis C) testing system.  That offers Biorad an extensive distribution network.  These two viruses (HIV and HCV) often appear together in a single patient. Thus, if one machine runs both tests, the results are likely to be available sooner. That’s good turn around for patients and clinical labs. And it puts Bio Rad in the middle of a significant trend on the clinical side of the medical equation, the creation of value by improving efficiency.

On the research side, the company reported increased sales of its Droplet Digital™ PCR, process media, and cell biology products, especially in Europe and North America, with a drop-off in sales in Asia for Q1 in 2015.  The Droplet Digital PCR product is a key product line at this point, as it lets researchers perform genomic analysis in order to fashion DNA related disease and product analysis.  PCR is the polymerase chain reaction, an analytical technique that allows for sequencing of DNA and RNA at a much faster rate.  PCR is the primary technique used in deciphering the human genome.

Bio Rad reported a 7.2% currency affected decrease in revenues ($472 million) for Q1 2015, but reported a nearly threefold increase in net income (.61 cents vs. .23 cents) compared to the first quarter of 2014 along with an increase in gross margins of 57.1% compared to 54%.  Gross margins were positively impacted by some tax benefits.  Sales were flat to slightly positive when currency effects were removed.  So, the combination of an improved tax burden, some belt tightening and restructuring, and shoring up the long term of leading business lines puts the company in a very competitive place.

What got us most interested is the fact that the stock took off after earnings, despite the flattish results.  Some of that may be the result of the effects of the strong dollar. The company, in its conference call noted that a strong dollar would be a “significant” headwind for its sales, adding that it could impact “sales by nearly $44 million and operating profit around $10 million.”

Yet, the dollar has started to weaken, due to expectations of a slowing U.S. economy.  That seems to have become a positive for the stock which rallied nearly over 6% since its May 5th earnings release, delivering a new high and a chart breakout on May 15th.

Bio Rad management kept its 2015 guidance intact and cited the release of several new products in 2015 including a diabetes monitoring system and a blood typing system which are expected to grow international sales in the second half of 2015.  This is where the positive surprises could come, especially if the dollar remains weak or falls further.

ASCO, the cancer drug conference that usually delivers big news had little effect on the biotech sector last week.  Roche (RHHBY) scored two days of gains on positive news on its lung cancer drug alectinib.  Bristol Myers (BMY) and AbbVie (ABBV) got some fair news on the multiple myeloma drug elotuzumab, but the stocks did little.  Puma Biotech (PBYI) got clobbered as its breast cancer drug, neratinib, was barely better than placebo. The stock lost 20% of its value on May 14th.

This type of response to fair news on drug development is exactly what we described above as the new normal.

Repligen (REGN) continues to do well while Emergent Biosolutions (EBS) continues to form a base.  Medivation is digesting its recent gains.  We still like all three stocks but would wait for some consolidation to add to any existing position in Repligen which has moved higher for an extended period of time.

Investors who bought shares in the biotech sector ETFs, IBB and PBE are doing reasonably well. These two ETFs tend to follow the general trend of the Nasdaq Biotech Index (NBI) which has returned to an uptrend.  We recommend staying with this trade for now.