The Rubber Band Is Getting Tighter

As the chart below reveals, the biotech sector is showing a great deal of relative strength remaining above key technical support of its 20-day (green dotted line) and 50-day (blue line) moving averages.   NBI has remained within striking distance of a break out.  It may not be coincidental that politics is playing a role in the sector’s holding pattern with an important Supreme Court decision on the Affordable Care Act pending and the potential for some volatility as the politics of the Asian Free Trade situation in Congress. Both could have some impact on the prices and market access that biotech companies could command in the future. 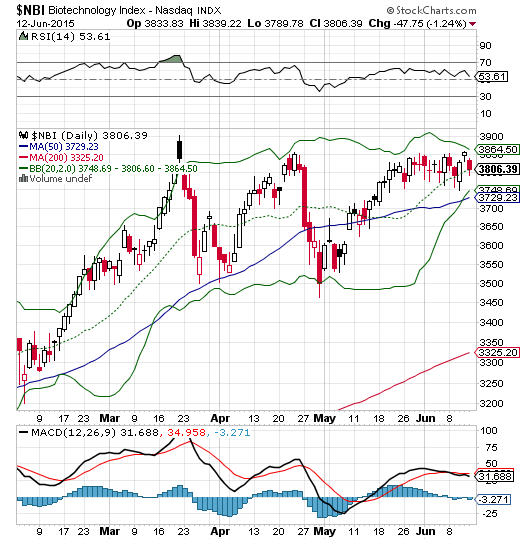 The Bollinger Bands (solid green line situated above and below current prices) are getting tighter around the index. That is a sign that volatility has decreased and that a big move is coming. As we’ve been saying, a sustained move above 3900 could take the index into the mid 4500 area in a few weeks.  There is no way to know the direction of the likely move. But a big move is likely to come based on the current technical status of the sector.

If you’ve been following our STI Biotech portfolio over the last few weeks, you might have been wondering how we pick stocks.  Today, we reveal our method, the EBIS (Emerging Biotech Investment System), a system based on fundamental analysis of emerging biotech companies with market capitalizations of $10 billion or less, at least when we first pick them up on our radar.

We use eleven fundamental criteria that are updated every quarter after the earnings results are published. Each criterion gets a value of +1 or zero.  A total of 8 or more points earns a Buy rating.  A total of 5-7 points equates to a Hold rating.  Less than 5 points is a Sell or Avoid rating.  Here is a summary:

Table 1 summarizes the EBIS ratings for our current portfolio picks as of their most recent quarterly earnings.

All the companies on our list have cash on hand; revenues from one source or another, pipeline strength and either have products or promising products in late stage clinical trials.  Repligen has the most solid revenue growth as well as growing its net income.  Neurocrine is getting closer as it has begun to collect milestone payment s for its revenues. Perhaps the most important sign of health is that all of these companies have favorable Worst Case Scenario Ratios.

This item is for information only at this point. In case the reader is not aware of it, there is a way to short biotech via an ETF, the Proshares Ultrashort Biotech ETF (BIS). It’s a leveraged ETF that moves at twice the rate of the Nasdaq Biotech Index (NBI).  It’s not for the faint-hearted, and at this point we are not recommending buying the fund unless the reader has some concerns about his/her biotech portfolio because of the market.  But that may change in the future.

Buy Alert – Neurocrine Biosciences. (Nasdaq:  NBIX BUY at 46, Stop loss 36) Neurocrine Biosciences still looks ready for a potential breakout and could move to the 55-58 area.  The stock, which we originally highlighted in our 5/29/15 update had a volatile week and came within two cents of tripping our buy point. The company recently announced problems with its congenital adrenal hyperplasia drug’s development.  We like the stock based on the prospects of its Elagolix drug for treating endometriosis a condition of pre-menopausal women linked to the menstrual cycle and pelvic pain.

Emergent Biosolutions (EBS) (Buy 5/11/15 MPP* 30.63 – 6/14/15 Closing price 31.84) – EBS broke out on an intraday basis last week but pulled back.   The shares remain in a very sustainable looking up trend.   EBS makes BioAnthrax, a preventive anthrax vaccine and is working on a new generation of the vaccine.

Medivation (MDVN) (Buy 5/11/15 MPP 124.11 – 6/14/15 Closing Price 112.91- Stop Loss 108) – Medivation has been consolidating and may bounce over the next few days to weeks. But the stock could also weaken further after a big run so we’ve added a stop loss at 108.  The company delivered some disappointing data regarding a breast cancer trial of Xtandi, the company’s testosterone blocking agent.  Xtandi continues to gain ground in its FDA approved indication in the treatment of prostate cancer but the market was looking for further potential markets such as breast cancer.

Repligen (RGEN) (Trading Buy 4/20/15 – Median Purchase Price 33.23. Buy 5/11/15 Median Purchase Price 38.45 – 6/12/15 Closing Price 38.22) – Repligen is still consolidating offering those who have missed the move up a chance to move into the shares.  There seems to be good support for the shares at 37.50. RGEN remains well positioned in the current hyper growing research market as it is a leading manufacturer of one use filtration systems for the separation on antibodies.

IBB is weighted more toward the large cap biotechs on the Nasdaq while PBE has smaller companies as well as some NYSE stocks as components.

Shares of Axovant Sciences went public on 6/10/15 and delivered a near double closing at $29.90 after official pricing at $15. They gave back a fair amount on 6/12 closing at $22.31.  The company is joining the race to make a difference in Alzheimer’s disease with a drug it bought from Glaxo Smithkline for $5 million in December 2014. Yeah, that sounds a little fishy.  The key for investors is whether AXON proves the markets wrong and makes a difference with RVT-101 which so far has only been proven to help with Alzheimer’s symptoms but has not cured anyone with the disease.

This story is notable for two reasons.  One; this drug, RVT-101, is not a blockbuster as far as anyone can tell. If it was then why would Glaxo sell it to a startup for $5 million? Glaxo is like any other company, not infallible. But they do have a pretty good record for picking winners and making money.   Two; what in the world was the market thinking when it took the shares of Axovant up 99% on its IPO? Again, the company has no products and the clinical data it is using to fuel the IPO has been “viewed with skepticism” according to a CNBC report.

This may or may not be important, but it is worth keeping an eye on for sure.  That the stock gave back nearly 50% of its first day’s gain surely is interesting.