As energy companies file their annual reports over the coming weeks, we will be poring over the details to sort those with strong balance sheets from others slouching toward bankruptcy, and to identify opportunities as well as threats as the producers write down proved reserves in response to lower prices.

For the most part, these annual reports are submitted to the U.S. Securities and Exchange Commission (SEC) within the first 60 days following the end of the fiscal year.

Today, I will highlight the energy stocks that have fared well over the past 90 days despite the overall abysmal performance of the sector.

Using my custom screener and the S&P Capital IQ database, I looked for the top performers since Nov. 1. I limited the screen to companies trading on U.S. and Canadian stock exchanges with an enterprise value (EV) of at least $400 million (there were some well-known companies in that $400-$500 million range). These criteria reduced the number of screened companies from 605 to 348.

The 90-day returns of this group ranged from -93.9% to +169.1%. The average performance of the group was -15.5%. There were 39 stocks that returned at least 15% during the 4th quarter, but after a pullback to start the year only 17 have a trailing 90-day return of at least 10%. Keep in mind that this is not an endorsement of any of these stocks, but simply a survey of those that — for whatever reason — have outperformed recently. Here they are in descending order of 90-day performance: 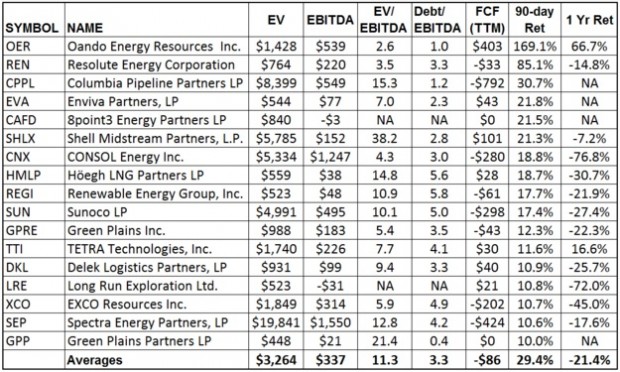 Despite the strong performance over the past three months, just two stocks on the list have positive returns over the past year. (Note that stocks that show “NA” in the “1 Yr Ret” column debuted during 2015.)

Also note that many different sectors are represented on this list, so one has to use caution in comparing metrics. A midstream MLP like Shell Midstream Partners (NYSE: SHLX) would be expected to have different financial metrics from an upstream shale oil and gas producer like EXCO Resources (NYSE: XCO).

The top performer on the list, Oando Energy Resources (TSX: OER), is a producer with a portfolio of oil and gas assets in Nigeria and Sao Tome & Principe. All four of the upstream companies listed here — OER, Resolute Energy (NYSE: REN), Long Run Exploration (TSX: LRE) and XCO — trade under $2 per share, increasing the risk of extreme volatility.

The largest category in the list is renewable energy. For example, Enviva Partners (NYSE: EVA) is engaged in the supply of wood pellets that can be used instead of coal in power plants. 8Point3 Energy Partners (NASDAQ:CAFD) is a yieldco jointly sponsored by First Solar (NASDAQ: FSLR) and SunPower (NASDAQ: SPWR). Also, note that its data is for Q2, while the rest of the list shows Q3 free cash flow. Green Plains Partners (NASDAQ: GPP) owns, operates, develops and acquires ethanol logistics assets, while its parent Green Plains (NASDAQ:GPRE) produces and markets ethanol. Renewable Energy Group (NASDAQ: REGI) owns and operates biodiesel production facilities.

As we advised in December in A Christmas Gift for Energy Producers, these are the types of companies that are likely to benefit from new rules adopted late in 2015. This includes not only the spending bill that extended tax credits for renewable energy but also the Environmental Protection Agency’s decision to raise quotas for ethanol that must be blended into the gasoline supply above previously proposed volumes.

Today’s exercise was meant to convey that there are still bright spots in the energy sector, and to highlight some companies that might otherwise have remained off your radar. A couple of these were new to me. We will continue to cast a wide net this year in search of value.