A Burning Appetite for Wood Chips

The wood pellet business is booming, in particular the export trade from the U.S. to Europe. The main demand driver in Europe is the European Commission’s 2020 climate and energy plan, which seeks to reduce greenhouse gas emissions. Member states have national renewable energy targets, which some countries are meeting by using wood pellets to produce electricity. This can either be done by burning the wood pellets alongside coal, or with a dedicated wood pellet power plant. The primary objective is the displacement of coal, with its inherently high carbon dioxide emissions, in power production.

The U.S. is the world’s largest producer of wood pellets. Between 2012 and 2013 pellet exports from the U.S. doubled, with 98% of the trade destined for European markets, according to the U.S. Energy Information Administration (EIA). 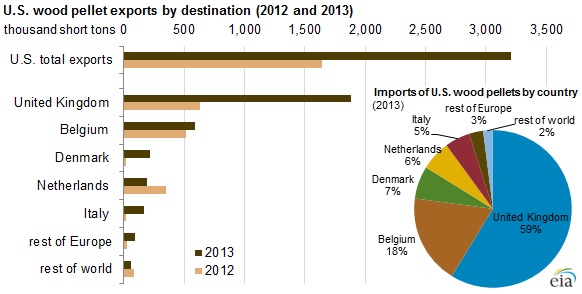 The sourcing of U.S. wood pellet exports has been concentrated in southeastern states because of abundant commercial forests and relatively low shipping costs to Europe. Rising demand and ample supplies have spurred a flurry of new projects in the region. 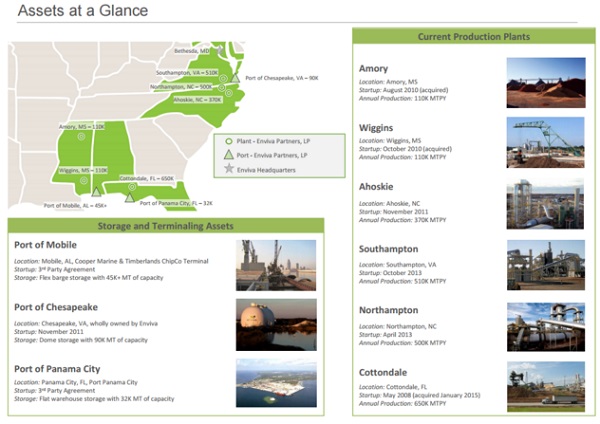 Enviva Partners owns excellent transportation infrastructure for exporting pellets, with a deep-water marine terminal at the Port of Chesapeake, Virginia and long-term leases with the ports of Mobile, Alabama and Panama City, Florida. Transportation costs can account for a quarter of the total cost of wood pellets, so companies with strategically located transportation infrastructure will have an advantage over competing pellet manufacturers in Brazil and western Canada.

Industrial pellet demand is forecast to grow at a compound annual growth rate (CAGR) of 20% through 2019, driven primarily by Europe. Demand for pellets for heating is forecast to grow at a CAGR of 9% through 2019. Further, the EPA’s Clean Power Plan could create substantial demand in the U.S. similar to what is currently being experienced in Europe as utilities seek to reduce carbon dioxide emissions.

In December the partnership issued guidance for 2016. Enviva expects net income in the range of $43 million to $47 million and adjusted EBITDA of $83 million to $87 million. The partnership expects to generate distributable cash flow of $67 million to $71 million, or $2.71 to $2.87 per common and subordinated unit in 2016. At the current price, these numbers add up to a prospective annualized yield of 14.9% to 15.8%. One potential negative to consider is that cash distributions beyond $0.4744 per common unit and subordinated unit in any quarter will trigger incentive distribution rights (“IDRs”) to be paid to the general partner.

Investors seeking the tax advantages of an MLP without the risks of the ongoing bear market in the oil and gas industry have a number of unconventional options to consider. Enviva Partners produces and sells wood pellets, and while its equity has been affected by the overall downturn in the MLP space, it has proven to be far more resilient than that of the more conventional energy shippers and processors. Enviva’s total return of -9.2% over the past 12 months places it in the top 10 of the best-performing MLPs, and its 2.9% year-to-date gain is one of only a handful of positive returns this year among MLPs.

Of all the reasons to buy stock, the fact that a famous investor or fund has disclosed owning it has to be one of the silliest.

The public isn’t privy to the exact timing of such buying and selling, the rationale or any offsetting options bets that needn’t be revealed. It almost certainly doesn’t understand how such often relatively small stakes fit into the overall portfolio, or the decision process that led to the position.

It’s interesting of course, that someone at Berkshire Hathaway thought Kinder was a bargain. But, for all it matters (and it really doesn’t) that person was almost certainly not Buffett himself but rather one of several investment managers to whom he’s delegated the chore of deploying Berkshire’s billions.

Furthermore, we don’t know whether that person bought in early October with the stock at $32 or in December at $15 after Kinder Morgan slashed its dividend. We don’t know anything really, besides the fact that we will not be forewarned before Berkshire sells, as it did with its stake in Chicago Bridge and Iron (NYSE: CBI) sometime late last year, for example.

It’s fine to own Kinder Morgan for its promising collection of essential midstream infrastructure or in the hopes that the reduced dividend obligations will rapidly deleverage an overextended balance sheet. But adding to the stake simply because a famous company has opened a position amounting to a tiny slice of its assets is highly unlikely to improve your long-term returns. KMI remains a Hold in the Growth Portfolio.