Although our sister publication MLP Profits focuses much more closely on master limited partnerships, MLPs are an important part of our portfolios at The Energy Strategist. In fact, they comprise more than half of our current Best Buys list. Today I want to reiterate the reasons the sector is looking especially good.

The MLP sector was down more than 30% in 2015 — one of its worst years. But we mustn’t lose sight of the fact that the objective is to buy low. The sector has certainly been heavily discounted. Sentiment remains weak, but that’s when buying opportunities manifest.

To show why this is the time to buy I will review the sector’s long-term performance and the historical correlation between MLP yields and their short-term returns.

But first, let’s briefly review some specifics of MLP investing for investors who may not be familiar with this tax structure.

The primary advantage of MLPs lies in their tax treatment. Master limited partnerships aren’t subject to the corporate income tax, passing profits and tax obligations directly to unitholders. This arrangement avoids the double taxation of corporate income and dividends affecting traditional corporations and their shareholders and, all things being equal, should deliver more attractive returns. As we will see below, that has indeed been the case.

But the distributions from MLPs come with another perk. They are actually classified as a “return of capital,” while the typically large depreciation deductions limit the MLPs’ net income and therefore their limited partners’ immediate tax obligations.That means a unitholder may not owe little or any income tax on a double-digit yield in a given year.

Instead, returns of capital reduce the cost basis of an investment in the MLP. When the units are sold the accumulated depreciation deductions are taxed at the seller’s personal income tax rate, while the rest of the capital gain gets the special long-term capital gains tax rate. The capital-gains tax rate also applies to ongoing distributions once the cost basis hits zero.

Being able to defer taxes until the investment is sold is an advantage, since the income can be reinvested to generate compounded returns that could offset the eventual tax bill. And when MLPs held in a taxable account are inherited the new owner gets a stepped up cost basis, wiping clean any prior deferred tax obligations.

The downside is more tax paperwork and more complicated tax returns. MLPs issue Schedule K-1 forms instead of the 1099’s reporting corporate dividends, and the K-1 reflects the unitholder’s share of the taxable income. Some unitholders, especially those with large stakes, may need to file returns in multiple states in which a given partnership might operate.

Partnerships are not required to release annual tax information until April 15. However, most K-1s are issued between late February and early April, but this could still delay a tax return.

So the tax-advantaged income comes with some additional tax hassles. But historically the performance has been well worth the trouble.

Consider the long-term performance of the Alerian MLP Index (AMZ). The AMZ is a composite of the 50 most prominent energy master limited partnerships accounting for approximately 85% of the MLP sector’s total float-adjusted market capitalization. The related index that tracks the total return of AMZ components, including distributions, is known as AMZX.

The AMZ was launched in June 2006, but Alerian has back-tested the index to tabulate the  returns it would have garnered going back to 1995.

At present, the top 10 AMZ components are:

Despite the 32.5% loss suffered by the MLP sector in 2015 (represented in the table below as the AMZX), MLPs still lead other major asset classes (including the S&P 500) in annualized performance since 2005: 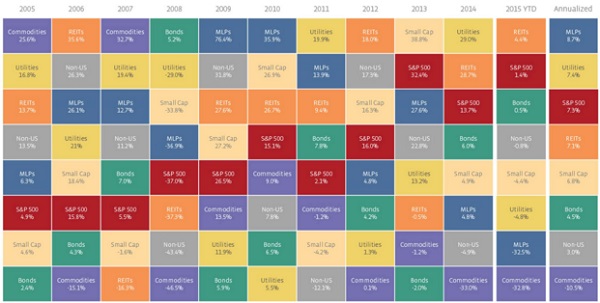 Over the past 10 years MLPs have generated 131% on a total return basis, compared with 102% for the S&P 500, 104% for utilities, 99% for REITs, and 56% for bonds. After a sharp sell-off during the 2008 financial crisis (comparable to the losses in 2015), MLPs enjoyed a steep V-shaped recovery as investors searched for yield and safety.

Before the 2014 downturn, the AMZ had significantly outperformed the S&P 500 for more than a decade. From 1996 until 2001, the S&P 500 was the better performer, but between 2001 and 2014 the AMZ opened up a significant performance lead. Only once prior to the 2014 correction had the AMZ pulled back to the historical performance level of the S&P 500, but shortly after that 2008-9 downdraft the AMZ again began to substantially outperform the S&P. The chart below shows the price return of $100 invested in these indices on Jan. 1, 1996. 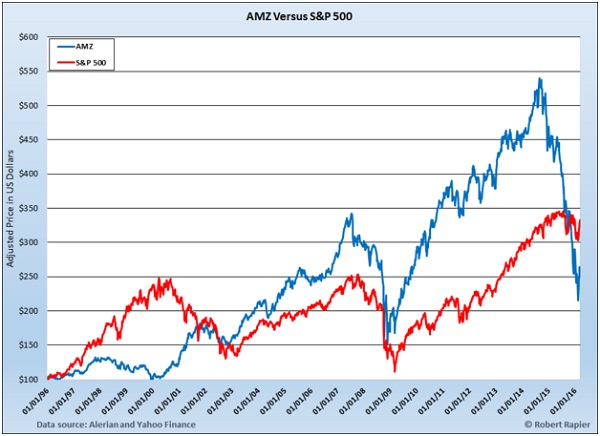 Last year’s losses dropped the AMZ well below the 20-year performance of the S&P 500, but a different picture emerges if we compare total returns (i.e., including dividends and distributions over that time) of the two indices. The annualized yield of the AMZ over the past 20 years has tended to be in the 6-8% range, while the S&P 500 was typically at or around 2%. That makes a huge difference to the return over time: 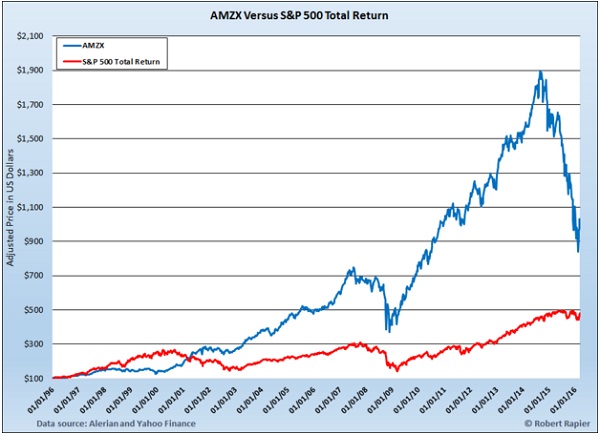 In this case, it becomes clear that despite the large correction, an investor would still have been substantially better off in the AMZ over the past 20 years (and moderately better off over the past 10 years). This is small comfort to  investors who first invested in the sector three years ago, but corrections like this create opportunities. The MLP sector is cheaper than it has been in years, but it isn’t likely to remain this cheap for long.

At least that’s what the AMZ yield is telling us.

Back in December I wrote about the historical relationship between MLP yields and near-term unitholder returns in MLP Investing Insider (The Loud Message of Fat Yields). The average yield of the Alerian index going back to 1995 is 7.46%. And as the following chart shows, over the past 20 years the average AMZ yield (the aggregate annualized yield of its components, measured weekly) has only risen above 10% three times. 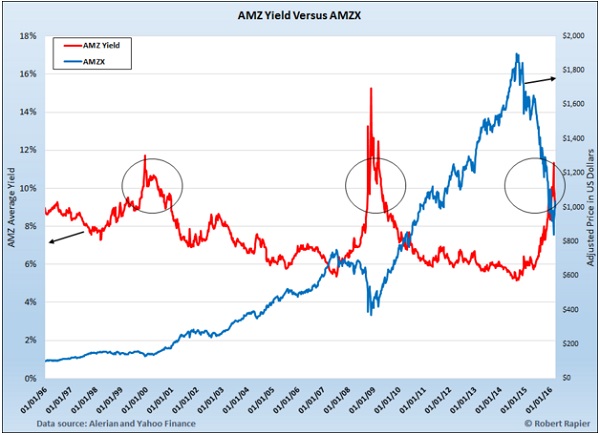 The Alerian yield rose above 10% for only the third time in the last 20 years just last month. Since breaching the 10% yield mark in February, the AMZX has risen 8.4%, which has dropped the yield to 9.1%.

Of course the reason the yield rose above 10% was because the securities that make up the AMZ  were correcting sharply. It is always possible that declines in unit value can lead to an unsustainably high yield that subsequently leads to a distribution cut, but that’s why we closely watch metrics like distributable cash flow (DCF), the distribution coverage ratio, and debt levels. If the DCF is stable or growing despite the rise in yields, then the yield is likely going to contract because the unit price rebounds, as was the case in 2000 and 2009.

If you agree that the sector seems to be undervalued, which MLP should you buy? Of course one could simply opt to buy a fund that tracks the AMZ, but most of these must pay corporate income tax on their earnings. This would largely negate the key tax advantages of owning an MLP directly.

Among individual MLPs, I like the granddaddy of them all — Enterprise Products Partners (NYSE: EPD). EPD is by far the largest MLP and is presently our #5 Best Buy. Despite the downturn in commodity prices, EPD has managed to grow its distribution and has maintained a respectable distributable cash flow coverage ratio of 1.3x for the past 12 months. Given its financial metrics, it is likely one of the safest picks among our Best Buys, and therefore ideally suited for conservative investors (which is why it is in our Conservative Portfolio).

A smaller alternative to EPD for conservative investors is Magellan Midstream Partners (NYSE: MMP), our #4 Best Buy. Like EPD, MMP has managed to grow its distribution while maintaining a large cash flow cushion over for the past 12 months, but its yield is a more modest 4.7% (versus EPD’s 6.4%).

But there are plenty of other options for investors with higher risk tolerance. Energy Transfer Equity (NYSE: ETE) is an MLP that we have covered at length (see Energy Transfer’s Nuclear Option from the previous issue). It is our #3 Best Buy, but it comes with some baggage, and hence extra risk (which is why it’s in our relatively riskier Growth Portfolio). Other names to consider from our Best Buys list are Capital Product Partners (NASDAQ:CPLP), AmeriGas Partners (NYSE: APU), PBF Logistics (NYSE: PBFX), and Delek Logistics Partners (NYSE: DKL).

The yield of the Alerian MLP Index recently rose above 10% for only the third time in the past 20 years. Both prior instances were followed by strong price gains over the next 12 months. If history is any guide, today’s MLP prices signal a buying opportunity that only presents itself every few years. If you haven’t invested in the MLP sector in the past, now may be the time.