Upstream Down the Drain

One question that I have been asked on a regular basis — since almost the start of the decline in oil prices in 2014 — is whether it is time for investors to jump back into upstream (i.e., oil and gas production) MLPs. Today I want to emphasize the risks of these upstream MLPs as evidenced by some of their 2015 financial metrics.

Given the high risk, we don’t normally recommend the upstream sector for most MLP investors. On a historical note, when I started writing this newsletter the original portfolios for both MLP Profits and The Energy Strategist did contain one upstream partnership — Linn Energy (NYSE: LINE). We kept it in the portfolios for a while, and investors who had held since the original recommendation more than doubled their money.

But we became increasingly concerned over a weakening cash flow position and an SEC investigation into its accounting, so on July 2, 2013 we issued a sell recommendation for Linn Energy. On that day Linn Energy units closed at $27.05. Today you could buy a unit of Linn for 35 cents. This should emphasize to investors the significant risks in the upstream MLP space.

But since these producers are an ever-popular topic of inquiry with investors, today I want to list and compare them. For this exercise, I used a proprietary Excel-based screen that utilizes the S&P Global Market Intelligence database. I screened for publicly traded partnerships engaged primarily in upstream operations that reported at least some oil and gas reserves at the end of 2015. Most of these are engaged in oil and gas production, but two of them own mineral rights and rely on royalty payments for distributions. In order of descending enterprise value (EV), they are:

There are two significant items to note in this table. First is that a Debt/EBITDA level above about 3 is high. The higher it gets the more difficulty a company will have in paying off its debt. Companies like Linn Energy that have a Debt/EBITDA ratio above 6 will find increasingly limited options in managing their debt, and bankruptcy will loom as a realistic possibility. Don’t let Linn’s $9 billion EV mislead you into thinking otherwise.

In fact, the formula for calculating EV is to take the market capitalization plus debt, minority interest and preferred shares, minus total cash and cash equivalents. Much of the difference between a company’s enterprise value and its market capitalization is typically accounted for by its debt. Inclusion of debt provides a more accurate estimate of the cost of acquiring the company. In Linn’s case, its $9 billion of debt certainly matters a lot more than its $142 market capitalization in evaluating the partnership’s prospects.

The second thing to note from the table is that the two MLPs based on mineral rights — Viper Energy Partners (NASDAQ: VNOM) and Blackstone Minerals (NYSE: BSM) — have very little relative debt. That is primarily because they don’t have the same operating expenses as the conventional oil and gas producers. As a result, they have held up better over the past year than the others. Here is the list again, highlighting some other important performance measures: 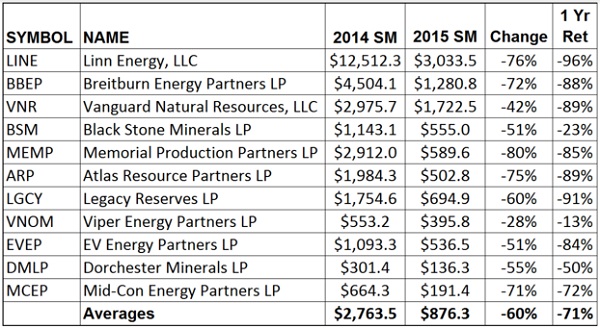 The first thing to note is the enormous year-over-year deflation in the estimates of future cash flows of these companies. To review, each year the Securities and Exchange Commission (SEC) requires energy producers to estimate the present value of the future cash flows from proved oil, natural gas liquids (NGLs) and natural gas reserves, net of development costs, income taxes and exploration costs, discounted at 10% annually. This calculation is called the standardized measure (SM), and is based on the average prices received over the past 12 months for oil, natural gas and natural gas liquids.

In total, between year-end 2014 and year-end 2015 these companies cumulatively reduced their estimated future cash flows by nearly $21 billion. Linn Energy took the biggest overall hit with a reduction of $9.5 billion. These reductions came about not only because the value of the reserves has dropped with oil prices, but also as some reserves were written off as uneconomical to produce at prevailing prices. Linn Energy, for example, had to reduce its estimate of proved reserves by nearly 40% from the prior year as a result of lower commodity prices.

The second item to note on this table is that VNOM and BSM — again the only two MLPs on the list based on mineral rights — were the only ones not to lose at least 50% of their value over the past 12 months. This suggests that if you want some exposure to the upstream MLP space, this may be a less riskier alternative to the exploration and production MLPs.

Nevertheless, we continue to recommend that investors avoid this space. The tables above highlight the high level of risk. Yes, when oil and gas prices ultimately rebound some of the names on the list will do quite well. But some others will likely be out of business.

And when MLPs go out of business their limited partners face losses beyond the worthless equity. That’s because the debt written off in a partnership bankruptcy is treated as taxable income accrued by the partners, even though these phantom gains don’t represent actual cash flow.

If you really feel like gambling, why not join Igor, me, and the rest of the Investing Daily gang in May at our annual Wealth Summit conference in Las Vegas? We don’t recommend gambling, but your odds at the casinos will be better than with these upstream MLPs.

The Wealth Summit is a great way for us to meet subscribers one-on-one, and there are still spaces open if you’re interested. Also this year I’ll be making a special recommendation to those who attend the summit, and to those who are members of our Wealth Society. (WESO members receive all the Investing Daily newsletters and other premium services.)

For me it’s a fun exercise because there are no rules. I’m not bound to recommend energy stocks. Nor am I allowed to reveal the pick beforehand. But I’d love to discuss it with you in Las Vegas.

Energy Transfer Equity (NYSE: ETE) is suffering from a massive case of buyer’s regret, but it’s the shareholders, its own as well as those of putative merger partner Williams (NYSE; WMB), who have been paying the price.

Earlier this month, Energy Transfer issued convertible warrants to top executives over Williams’ objections, effectively protecting its CEO and other insiders in the event of a future distribution cut. Last week, it attempted to further devalue its offer for Williams, which includes an increasingly unpalatable $6.05 billion cash component.

Energy Transfer said the equity it is to issue to Williams shareholders will be diluted by nearly 10% by means of incentive grants to its own executives. It also drastically downgraded its prior estimates of the long-term cost savings from the merger and indicated that it plans to consolidate the merged company’s corporate functions at its headquarters in Dallas, dramatically downscaling such jobs on Williams’ home turf in Oklahoma.

This is a continuation of a game of chicken that has three more months to run, before the end-of-June deadline set in the merger agreement. The discount in ETE and WMB shares reflects Energy Transfer’s decision to cast the deal in the most unflattering possible light, presumably to coax Williams shareholders into concessions or an outright rejection of the merger.

It’s fair to wonder whether the recent maneuverings have inflicted lasting damage on the reputation of Energy Transfer and its CEO Kelcy Warren.

Our assumption is that, as the merger deadline nears, the jockeying for relative advantage will give ground to the search for a mutually beneficial solution. But even if no such awakening takes place, the resolution of these uncertainties, on whatever terms, should help the market refocus on excellent and deeply discounted midstream assets, whether they’re controlled by one company or two.

Growth pick ETE remains the #2 Best Buy below $15; WMB is a Buy below $20 in the Aggressive Portfolio.

Where do you think ETE would be trading had this merger never even taken place? Your buy up to price of $15? Considering this stock has had two somewhat recent splits, $15 seems like a nice price. $45 would be better but beggars can’t be choosers.

Tough to traffic in hypotheticals. I just now it will be materially higher when (not if) crude gets back up to $60/bbl.