Thus far I haven’t spent any time discussing the energy policy proposals of the presidential candidates. I suppose at some point I should address the implications of the notion put forth by the leading Democratic candidates that they would ban fracking (now responsible for 50% of U.S. oil production), but today I want to briefly comment on an idea put forth by Donald Trump.

Last week the Republican presidential front-runner said he would consider boycotting oil from Saudi Arabia unless the Saudi government provides troops to fight ISIS. I am not going to delve into the politics of the Middle East today, but rather discuss whether Trump’s threat is realistic. 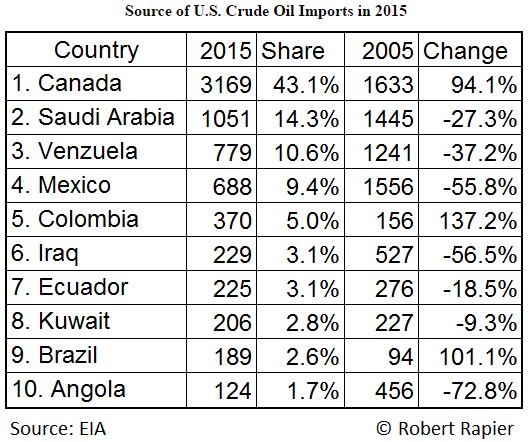 As a result of the surge in U.S. oil production that was enabled by hydraulic fracturing — which Bernie Sanders vows to ban and Hillary Clinton vows to severely limit — U.S. crude imports fell from 10.1 million barrels per day (bpd) in 2005 to 7.4 million bpd in 2015.

Canada was by far our biggest foreign supplier in 2015 at 3.17 million bpd. That accounted for 43.1% of U.S. crude oil imports, and represented a near-doubling in volume from 10 years earlier. The U.S. presently consumes almost 70% of Canada’s oil output.

Saudi Arabia was our second-largest source of imports, supplying 1.05 million bpd in 2015. This represented 14.3% of U.S. crude imports, and a volume drop of 27.3% from 2005. But over that time frame global demand for crude surged, so Saudi Arabia had no trouble finding customers for its crude. In fact, Saudi Arabia has substantially ramped up its production since 2005, so the decline in exports to the U.S. wasn’t because it doesn’t have sufficient oil to export (which is increasingly an issue for Venezuela and Mexico, our #3 and #4 suppliers of crude oil).

So, going back to Trump’s proposal, is it reasonable to boycott oil from Saudi Arabia considering that it is still such an important supplier to the U.S.? Sure, we could decide not to purchase the 1 million bpd we currently get from them.

We’d obviously need to make up the shortfall from other countries, which in turn takes the same 1 million bpd of supply off the global market. But guess who suddenly has 1 million bpd of spare export capacity to fill that void? Saudi Arabia, of course. Yes, oil is a globally traded, fungible commodity. Short of financial sanctions like those used until very recently to stifle Iranian exports, boycotting Saudi crude would have minimal economic impact on that country given the global scale of the oil trade.

To really hurt Saudi Arabia unilaterally, we would need to curb U.S. imports. That could be accomplished with a combination of higher U.S. oil production and lower demand, but those conditions typically result from higher oil prices.

Come to think of it, that’s just what the ailing shale oil producers need. I can envision the campaign slogan now: “Vote Trump for higher oil prices. You’re welcome, America.”

Energy Transfer Equity (NYSE: ETE) is suffering from a massive case of buyer’s regret, but it’s the shareholders, its own as well as those of putative merger partner Williams (NYSE; WMB), who have been paying the price.

Earlier this month, Energy Transfer issued convertible warrants to top executives over Williams’ objections, effectively protecting its CEO and other insiders in the event of a future distribution cut. Last week, it attempted to further devalue its offer for Williams, which includes an increasingly unpalatable $6.05 billion cash component.

Energy Transfer said the equity it is to issue to Williams shareholders will be diluted by nearly 10% by means of incentive grants to its own executives. It also drastically downgraded its prior estimates of the long-term cost savings from the merger and indicated that it plans to consolidate the merged company’s corporate functions at its headquarters in Dallas, dramatically downscaling such jobs on Williams’ home turf in Oklahoma.

This is a continuation of a game of chicken that has three more months to run, before the end-of-June deadline set in the merger agreement. The discount in ETE and WMB shares reflects Energy Transfer’s decision to cast the deal in the most unflattering possible light, presumably to coax Williams shareholders into concessions or an outright rejection of the merger.

It’s fair to wonder whether the recent maneuverings have inflicted lasting damage on the reputation of Energy Transfer and its CEO Kelcy Warren.

Our assumption is that, as the merger deadline nears, the jockeying for relative advantage will give ground to the search for a mutually beneficial solution. But even if no such awakening takes place, the resolution of these uncertainties, on whatever terms, should help the market refocus on excellent and deeply discounted midstream assets, whether they’re controlled by one company or two.

Growth pick ETE remains the #3 Best Buy below $15; WMB is a Buy below $20 in the Growth Portfolio.