The past few months of market volatility remind me of tsunami stories. Victims fail to notice the steady, increasing pounding of surf on the beach, with each wave followed by a stronger one. Before they know it, waves mount and lay waste to everything in their path.

Consider that at the start of this year we saw huge market declines, followed by a rebound, and then more market mayhem. In the last two weeks all the gains after the market rout were practically erased for the year, whether you’re looking at the S&P 500 or the Dow Jones or most other global indexes. 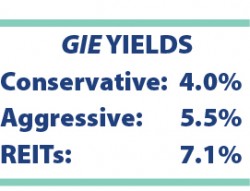 I’m not forecasting an imminent financial tsunami that will obliterate the world’s stock markets.  But the recent waves of volatility should be seen as a warning to focus on income safety and ultra-conservative investments.

In this story I’ll talk about sources and consequences of this volatility, and recommend three investments that should weather it well. Also in this issue of Global Income Edge we profile National Grid, an infrastructure investment that will float above the fray.

Three recent reports, by the CEO of the world’s top bank, J.P. Morgan, and by two financial think tanks, lay out the case that the worst may be yet to come.

Here is a synopsis of these reports:

On Market Volatility. J.P. Morgan Chief Executive Officer Jamie Dimon, in his annual report to shareholders, wrote, “In the last year or two, we have seen extreme volatility in the U.S. Treasury market, the G10 foreign exchange markets and the U.S. equity markets. We have also seen more-than-normal volatility in global credit markets. These violent market swings are usually an indication of poor liquidity.”

Dimon believes that lower liquidity and higher volatility are here to stay. He warned that illiquidity can mean investors won’t be able to sell investments when markets go crazy and investors head for the exits.

He acknowledged that the bank doesn’t have a complete handle on the forces driving these market conditions. But he said, “The good news is that the system is resilient enough to handle the volatility.”

Low Interest Rates. The U.S. Treasury’s independent Office of Financial Research, in a report to Congress on the stability of financial markets, identified three chief threats:

1) Excessive risk-taking from low interest rates. “Persistently low rates will continue to prompt investors to take higher risks to increase their returns on investment and may encourage excessive borrowing,” the report said.

2) Increasing debt and declining credit quality. “The ratio of the debt of nonfinancial businesses in the United States to gross domestic product is historically high and companies’ leverage (the ratio of debt to earnings) continues to rise.”

3) Pockets of vulnerability. “Rapid, sharp declines in market liquidity — exhibited during events from the ‘flash crash’ of May 2010 to episodes in 2015 —have amplified market shocks. If larger shocks hit, a decline in liquidity could … pose a threat to financial stability.”

Profits Declining. Finally, the Institute of International Finance, a Washington-based association that represents about 500 financial institutions from 70 countries, identified in a recent report what it calls a “global profit recession.” The institute blames poor productivity growth, weak demand and a general lack of pricing power on this recession. The IIF report concluded this will hurt global stock prices.

The Top Three for Safety

Two months ago we created a five-point liquidity ranking for our Conservative Portfolio holdings to help you identify how well these firms can withstand a protracted decline in the market while continuing to deliver dividends. (Please see the box detailing the criteria for the ranking.)

Here are the three firms that ranked the highest:

The #1 firm in our liquidity ranking also happens to be our #1 Best Buy in our Conservative Portfolio: pharmaceuticals giant Merck & Co (NYSE: MRK).

With a pipeline of 38 drugs in late-stage development, Merck strikes us as undervalued relative to its peers. 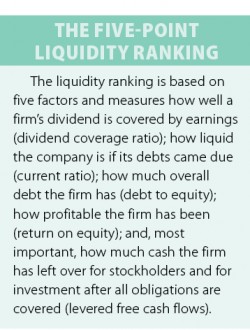 In early February, the company reported earnings per share up 7% from the year-earlier quarter and higher than the 91 cents Wall Street analysts expected. Merck has predicted earnings for 2016, excluding items, would come in at $3.60 to $3.75 per share, and full-year sales of $38.7 billion to $40.2 billion, which reflect an expectation the firm will grow EPS in the mid-to-high single digits, excluding the impact of exchange rates.

This is in contrast to 2015, when Merck had revenues of $39.5 billion and earnings were hurt by higher-than-expected foreign exchange issues. Merck expects to hit the high end of its forecast ranges on revenue and EPS growth this year as revenues from new product launches will more than offset increased competition from generic drugs.

Its new product portfolio is where shareholders will find future gains. For example, work on the Ebola virus is representative of Merck’s renewed focus on unmet medical needs. That’s not a novel approach, but is the result of the early 2000s when major pharmaceutical companies competed head-to-head to treat the same basic diseases.

The second-ranked company in our portfolio was recent addition Luxottica Group (NYSE: LUX). With just under $10.2 billion in revenue last year, Italy’s Luxottica is the leader in the premium eyewear segment, with its closest competitor only bringing in about $2 billion. In addition to its own well-known brands such as Ray-Ban, Oakley, REVO and Vogue, Luxottica also holds licenses to a number of others such as Coach, Prada, Polo Ralph Lauren and Brooks Brothers.

Demand for eyewear is expanding in emerging markets with more than 2.3 billion people in Asia, Africa and Latin America needing glasses, according to Exane BNP Paribas.

Luxottica’s share price dipped almost 10% when, in March, it lowered its earnings growth outlook. It attributed the revision to investing more than $1.6 billion to expand its business. A recent management shakeup didn’t help the stock price either.

But we see this as a buying opportunity, as net income is expected to increase at least 1.5 times the pace of sales each year through 2018. And spending on product development and expansion into new markets will help boost revenue by 5% to 6% this year, and at a “mid-to-high single-digit” rate in 2017 and 2018, the company said.

Even as the company has been experiencing heavy competition from generics in the United States and Europe, analysts believe that the recent launch of respiratory drugs and the strengthening in other divisions will offset this weakness to keep pharmaceutical sales steady for the next three years.

In the most recent earnings call, the CEO said that last year the company made “substantial progress” in new product sales growth and restructuring its global pharmaceuticals business. “This progress means the group is well positioned to return to core earnings growth in 2016.”