Find Refuge in This Infrastructure Play

Four months into 2016, global markets continue to be volatile. The world’s economies are slow to recover, making markets unsteady. Naturally, investors are looking for stability and income, and utilities continue to be a favorite safe haven. These are time-tested securities with safe dividends to help investors wait out the storm. Among our utilities, one blue chip offers an especially secure business with a solid dividend.

Yielding a generous 3.19%, National Grid (NYSE: NGG) earns its reputation for safety by having a stable business and strong international diversification. All of its revenue comes from two of the world’s most stable economies, the United Kingdom and the United States, which represent about 54% and 46% of the company’s business, respectively. 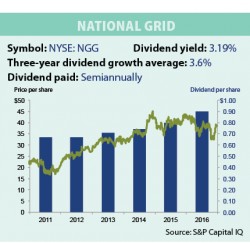 Because National Grid is mostly an infrastructure business, the company’s fortunes are not linked to the prices of commodities such as natural gas. This means that the company’s growth depends mainly on electricity and gas demand, which increase as economies and populations expand.

In the U.S., National Grid is almost equally impervious to commodity fluctuations because it operates primarily as a regulated business. The company owns 50 fossil-fuel-powered stations on Long Island and has 100% commodity pass-through in all of its contracts, which means that its revenue is linked to commodity prices.

Along with its subsidiary, Niagara Mohawk, based in upstate New York, National Grid delivers electricity to 3.4 million customers in Massachusetts, New York and Rhode Island. The company also serves roughly 3.6 million customers in the same three states, making it the largest natural gas distributor in the northeastern U.S.

Adding to its stability, National Grid is also a huge company with a market cap hovering around $53 billion, comparable to Duke Energy, America’s biggest utility.

A steadily growing dividend is another attractive feature. Increasing cash flow and earnings depends on National Grid’s ability to build out its multi-billion infrastructure power projects.

And the company doesn’t sit on its heels. Of the $2.67 billion it spent on capital projects in the first half of fiscal 2015, about $1.4 billion was invested into expanding its U.S. regulated business. A recently submitted proposal to the New York Public Service Commission would bring the utility’s total investment in the state’s systems from 2013 to 2018 to more than $3 billion. The company plans to spend a total of about $5.2 billion this year, which it expects will drive asset growth of 4% to 5%.

Over the long term, National Grid had expected to spend between $22.6 billion and $28.3 billion in the U.K. through 2020 to 2021. After regulators scaled back some of its projects, the company now thinks that it will only hit the lower end of this range.

To compensate for the limited growth opportunities in the U.K., National Grid wants to accelerate its U.S. spending by expanding its U.S. asset base by about 7%. To help fund this growth, last November the company announced it plans to sell a majority stake in its U.K. gas pipeline business. The divestment includes about 75% of National Grid’s business to infrastructure investors by the end of 2017 to allow it to focus on its faster-growing electricity and U.S. businesses.

Shareholders are expected to receive a one-time payout from the proceeds of the sale, as yet undetermined, which can come in the form of a cash payment or share buyback.

As National Grid ramps up its infrastructure investments, it continues to deliver strong performance. In the first half of fiscal 2015, its profits before tax rose 21% to $2.54 billion, while adjusted earnings per share increased 22%.

The company announced an interim dividend of $1.13 for its American depository receipt, a 2% increase from the same period in 2014. Management says it is on track to deliver strong overall returns and dividend growth this year.

Regardless, investors can still expect a steady yield of 3.19%, despite shares gaining 7.8% in the past 12 months. And again, the company offers stability. Its beta is 0.37, which means that its price swings are roughly one-third those of the market, to make sleeping at night much easier.

With a safe dividend and solid earnings, National Grid is a buy up to $74.

Khoa Nguyen is an investment analyst at Investing Daily. He manages the Personal Finance model portfolios and assists Investing Daily’s team of analysts with research and data, with special contributions to Utility Forecaster.

Khoa holds a bachelor’s degree from the University of Virginia, where he studied political science and history. Khoa is a well-rounded sports enthusiast, participating in such pursuits as tennis and judo.