Over the next few issues, I am going to present some screens based on the recently released annual reports for a number of energy companies. The purpose is to compare the financials of companies by sector to see which have become more or less attractive within each peer group. As attractive situations are uncovered, we will perform additional due diligence to see if we believe they belong in one of the Energy Strategist portfolios.

Today I want to focus on some of the major oil companies, but first I want to review one of the key parameters I use in my screens.

The details of a company’s oil and gas reserves are an important factor when attempting to calculate its fair value. But investors need to be wary of potential reserves numbers that a company may present to investors that are often many times higher than those calculated according to U.S. Securities and Exchange Commission (SEC) guidelines.

Because there is financial incentive for a company to exaggerate, and because exaggerations in investor presentations are often protected by the Private Securities Litigation Reform Act of 1995 (which provides a “safe harbor” for some forward-looking statements), I pay attention to what companies report in their SEC filings.

When U.S. oil and gas companies file their annual reports with the SEC, they have to report the amount and estimated value of their oil and gas reserves. The value of reserves is reported as  standard discounted cash flow (DCF), which is typically known as the standardized measure (SM). The SM is defined as the present value of the future cash flows from proved oil, natural gas liquids (NGLs), and natural gas reserves, minus development costs, income taxes and exploration costs, discounted at 10% annually. The SM must be calculated according to specific guidelines set by the SEC.

In the table below, I have highlighted the year-end 2015 SM for EOG Resources (NYSE: EOG). The calculation is performed by estimating future cash inflows based on proved oil and gas reserves ($68.7 billion), subtracting out estimated future production ($32.1 billion) and development ($15.8 billion) costs and income taxes ($4.6 billion), and then applying an annual discount of 10% ($6.6 billion): 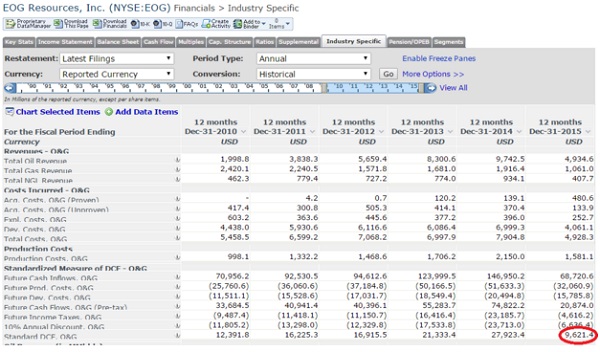 Not the sharp contraction in the SM for EOG from 2014. The 2014 year-end SM was $27.9 billion, which a year later had plummeted to $9.6 billion (circled in the table). That’s because the SM crucially depends on prevailing commodity prices. In 2015 those prices were sharply lower, which reduces the value of future revenue, but also results in companies removing reserves from their books if they can’t be profitably developed at the lower prices.

Some companies will also report what is known as a PV10, and many companies that are listed on Canadian exchanges will only report a PV10. The primary difference between the PV10 and SM is that the latter takes into consideration payment of income taxes (discounted at 10%). The PV10 is a pre-tax measure, and many analysts prefer it because companies can employ many strategies to minimize tax obligations. I personally prefer the SM for comparative purposes, because it is a GAAP measure. (GAAP stands for generally accepted accounting principles, the most formal and inflexible set of rules for assessing a company’s finances.)

My latest screen extracted reserve measures for 213 oil and gas producers — excluding integrated companies like ExxonMobil (NYSE: XOM) — trading in the U.S. and Canada from the Capital IQ Global Market Intelligence database. I will get to the details of the screen below, but it picked up 83 companies that reported both a PV10 and an SM. The discrepancies ranged from a PV10 4% below the SM in one case (the only case in which the PV10 was smaller) to 77% larger than the SM in the most extreme case.

In my opinion this is the problem with the PV10. Since it isn’t a GAAP measure, there can be differences in how companies arrive at the value. Thus, I prefer the SM when comparing companies, but for Canadian companies there is often no alternative except to use the PV10 measure.

Now that annual reports have all been filed, let’s check in on some of the major oil companies. Here are the top 10 pure exploration and production (E&P) companies according to the value of their 2015 SM:

Note that all of these companies are U.S.-based since Canadian companies typically only report a PV10. Canadian Natural Resources (TSE: CNQ), for instance, reported a PV10 of $47 billion. Had they calculated an SM, it would have likely ranked above ConocoPhillips (NYSE: COP) in the table.

Only two of the companies in the list — Apache (NYSE: APA) and EOG Resources — generated positive free cash flow over the past 12 months. All 10 companies have negative total returns over the past year, highlighting the breadth of the bear market in the energy sector. This is also reflected in the 64% average drop in the Standard Measure of these companies from 2014 to 2015.

Based on the metrics in the table, Apache looks like the best value of the group. The company generated slightly positive FCF over the past year, has the lowest EV/EBITDA and EV/SM of the group, and the second-lowest relative debt. Apache’s stock also has the best 12-month total return in the group.

Chesapeake is cheap from an EV/EBITDA perspective, but that’s primarily because its huge level of debt has dragged down its market capitalization over the past year, notwithstanding the recent rebound. Consider it a very high risk play.

EOG’s debt level has increased somewhat over the past year, but it is tied with Hess (NYSE: HES) for the lowest relative debt in the group. EOG also generated the most FCF among the group, which is one reason it is the most richly valued based on EV multiples. The three lowest debt multiples in the top 10 belong to EOG, Hess, and Apache, and they happen to be the three best performers of the group.

Anadarko (NYSE: APC) looks relatively overvalued considering its large debt ratio, the $6.4 billion cash drain in the past year and its relatively high EV ratios. However, this is a case where looks could be deceiving, and it highlights why screening is just a guidance tool, and not to be relied on too extensively. In 2015 Anadarko made a final $5.2 billion payment in settlement of a lawsuit stemming from its 2005 purchase of Kerr-McGee. This one-time payment distorts Anadarko’s financial metrics for 2015.

Screening my initial pool of 213 producers reporting reserve measures for those with positive EBITDA over the past 12 months, Net Debt/EBITDA below 4 and EV/EBITDA below 10, the top 10 look like this (again in descending order based on the standardized measure):

In this group, Antero Resources (NYSE: AR) and QEP Resources (NYSE: QEP) both look like good values, but keep in mind that both are predominantly natural gas drillers. That’s one reason that Marathon Oil (NYSE: MRO) trades at a premium to the group — it’s predominantly an oil producer as measured by the percentage of its proved reserves that are classified as oil. And even at current prices, crude reserves and output are valued more than natural gas with equivalent energy content.

Now, let’s have a look at the companies that reported a PV10.

Three Canadian companies show up on this list: Canadian Natural Resources, Crescent Point Energy (TSE: CPG), and Tourmaline Oil Corp (TSE: TOU). Note that CNQ is the only company on the list with an EV below its PV10. It also happens to be the top performer on the list. Crescent Point is another company that generated positive free cash flow in 2015, and seems to be modestly valued with relatively low debt.

This week I have started digging into annual reports across the energy sector, searching for companies in which the value proposition has improved. While the bear market took its toll on the energy sector, some companies were disproportionately punished. These screens should help flesh out good companies with solid prospects that are much better values than they were a year ago — while avoiding those whose debt loads put them at risk of bankruptcy.