Wind is rapidly emerging as an important piece in the global energy puzzle, and China has been at the forefront of this transformation.

The Chinese government requires major domestic power groups to increase their ownership of non-hydro renewable installed capacity to 3 percent by 2010 and 8 percent by 2020, and domestic producers are rapidly expanding wind-farm capacity. Biomass and solar account for insignificant portions of China’s power generation mix–wind is the only way to meet the government mandates.

Accumulated installed capacity reached 6 gigawatts (GW) in 2007 and is on track to hit 24 GW in the next two years, easily surpassing the government’s target of 10 GW by 2010. Should it happen, 3 percent of total global capacity would be in China. And the China Renewable Energy Industries Association (CREIA) expects China’s wind farm capacity to reach around 120 GW by 2020. 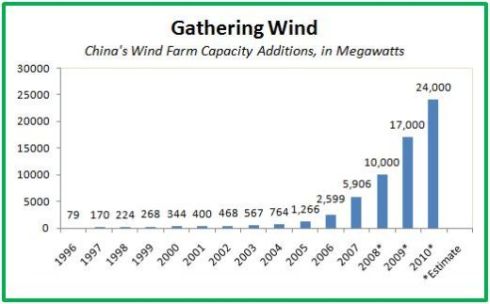 The condition of China’s electric power grid will also be addressed as part of the infrastructure initiatives. The government is providing significant resources to China’s two grid companies to fund necessary upgrade and expansion projects.

One objective is to allow the efficient delivery of energy produced by far-off wind farms to major consumption markets. The government also wants to establish a grid that will accommodate wind power to grow alongside the modernizing Chinese economy. The State Grid Company has increased its planned investment to more than USD100 billion over the next two years, while Southern Power Grid Company will spend around USD25 billion.

Boasting a large land mass and long coastline, China is rich in wind energy potential. The Chinese Meteorology Research Institute has calculated that “the land-based exploitable wind resource has a potential power generation capacity of 253 GW–based on a relatively low height of 10 meters above ground.” The ocean-based wind resource is capable of supporting a further 750 GW of capacity.

The rapid pace of wind power growth is good news for major turbine/component makers domestically and around the world.

The No. 1 domestic producer of wind gearboxes, China High Speed Transmission Equipment (Hong Kong: 658, OTC: CHSTF, CHSTE), is the best way to get a leveraged exposure to this wind power story.

CHSTE, China’s fourth-largest producer of traditional gearboxes, also supplies a wide range of other industries, including mining, construction, transportation and petrochemicals. In 2004 it expanded into the wind power gearbox market and now produces a broad range of wind gearbox products suitable for use from the 750 KW capacity range up to 3 megawatts. 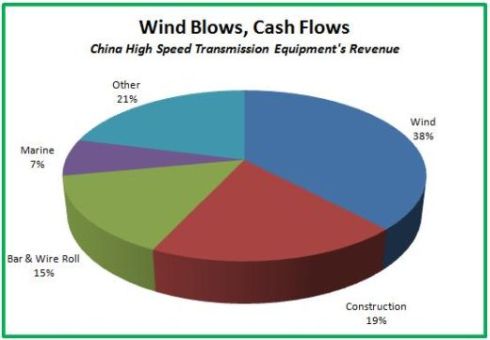 Today CHSTE is China’s largest maker of wind gearbox components, with a market share of almost 80 percent. Sales for the company’s 1.5 MW wind gearboxes, and the 2.5 MW set is also expected to post a big contribution to profits going forward. Both products were developed jointly with GE Energy, which holds a 5 percent strategic stake in CHSTE.

CHSTE is also an active exporter. Its newest customer is Denmark based Vestas Wind Systems (OTC: VWSYF), one of the most active developers of wind power systems in the world. Even before partnering with Vestas, CHSTE’s exports accounted for 16.5 percent of sales, and there’s no reason why that share shouldn’t increase in coming years.

The company enjoys an operating cost advantage over its non-China-based competitors, a significant positive during a period of slowing global growth. It’s possible the current downturn will prove an opportunity for CHSTE to gain market share as customers become more price-sensitive. That said, the slowdown will also negatively impact business if power companies cut back orders already been placed or substantially trim future expansion.

China High Speed Transmission Equipment, a new addition to the New World 3.0 Portfolio, is a buy up to HKD13.