Malaysia traditionally has been viewed as a backward economy with a very defensive market. As a general rule, the Malaysian market tends to perform best relative to other Asian markets during periods of higher oil prices. That’s because Malaysia is a net exporter of oil.

However, Malaysia has underperformed other markets in Asia this year due to uncertainty surrounding its upcoming general elections. The incumbent candidate is Prime Minister Najib Razak, who is widely viewed as an effective leader. The success of his efforts thus far has provided a roadmap for the country’s long-term development and investors like what they see.

Local observers have noted that the Malaysian government has been in election mode for months, and the latest budget passed in the final quarter of 2011 evidenced that observation. The budget increased the compensation for civil service workers, reduced the operating costs for taxi owners and lowered the cost of living by pushing through price cuts at government-sponsored stores.

The budget also provided about USD160 to households that earn less than USD960 per month, as well as a 2 percent increase in the pensions of retired civil servants. And the government plans to spend about USD1.9 billion though a “Special Stimulus Package” to upgrade schools, hospitals, basic rural infrastructure and public houses.

In addition to these election-related handouts, the budget also called for more services to be liberalized. In total, 17 services subsectors will be liberalized in phases this year. This liberalization will allow as much as 100 percent foreign equity participation in these subsectors.

A three-hour drive south from Kuala Lumpur, Iskandar is set to become one of Malaysia’s most developed regions and the focal point of revitalized economic ties to nearby Singapore. Malaysian economic planners aim to make Iskandar a holiday and shopping getaway for Singaporeans, or even a place of residence for people who work in Singapore.

To achieve these ends, Malaysia has launched an ambitious Economic Transformation Program (ETP) to revitalize the country. The government aims to attract USD444 billion for investments in 131 projects over the next 10 years and to double the country’s per capita standard of living.

The success of these initiatives will be critical to the long-term health of Malaysia’s economy. But the short-term picture suggests the country is on track to achieve these goals and that current Prime Minister Razak has a decent chance of getting reelected. But the main question is if his path to victory will allow him to form a strong government or if the country will end up with a hung parliament. This remains to be seen.

The level of FDI inflows to Malaysia remains solid, suggesting that the country’s economy is on the right path. Barring a complete collapse of the global economy, we expect the trend in FDI to remain on an upward trajectory. 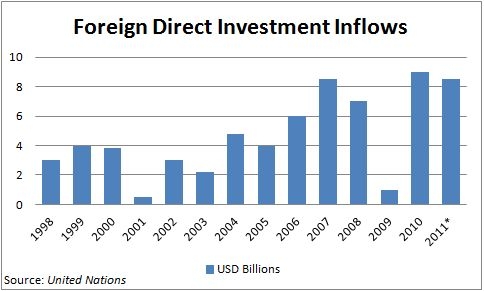 The Malaysian economy is small and relatively open to trade, which makes it susceptible to any downturn in global trade. Although a slowdown in global trade this year will impact Malaysia, the global economy is unlikely to collapse.

As Malaysia is a net exporter of energy and agricultural products, it has racked up a USD39 billion trade surplus from commodity exports in 2011 alone. Furthermore, Malaysia boasts one of the largest current account surpluses in the world, at 11.4 percent of gross domestic product (GDP), and is one of the so-called net creditor nations.

Although last year’s growth in GDP was lower than the prior year, it still rose by 5.1 percent and should grow by around 4 percent this year due to strong government spending and private investment. Inflation is also manageable at about 3.3 percent and is expected to fall closer to 2 percent in 2012 as food prices continue to decline.

Finally, the unemployment rate stands at about 3 percent and wages have held up well since the recent global financial crisis. Stronger wages should help boost consumption, which currently accounts for 50 percent of Malaysia’s nominal GDP.