Many investors have had questions about the health of GlaxoSmithKline (NYSE: GSK) over the past year, keeping the share price essentially flat (it’s gained 2.8%). Glaxo is a cash cow with its better than 5% yield, so we’ve been concerned too, as it’s one of our best-paying holdings. 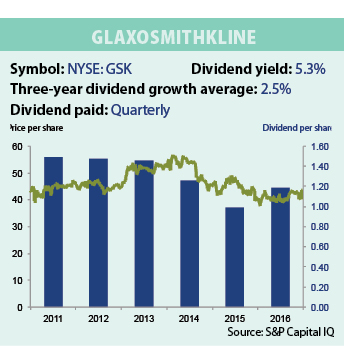 The biggest worry has been whether or not Glaxo would still be able to breathe easy as patents expire on its top-selling lung treatment Advair. Advair has faced competition from generics in Europe, but here in the U.S., while the drug’s patent expired in 2010, the protection on the drug’s Diskus inhaler has kept competitors at bay. That patent expires at the end of this year.

At the same time, generally tepid growth has left many investors wondering where the revenue would come from to replace Advair losses. Sales growth averaged only about 1% annually over the past decade and earnings growth has come largely from cost cutting.

Those concerns seem to be abating though after management predicted earnings growth of 10% to 12% this year. Sales growth has also already shown solid improvement, with vaccine sales up 14% in the first quarter and sales of consumer healthcare products up 4%. It has also managed to replace about 70% of the revenue lost due to generic competition for Advair.

Analysts are now forecasting that revenue will increase by just over 8% this year and the EPS could jump 20% in local currency terms. At current exchange rates, that would translate into a 4% revenue gain in dollar terms and a 6% jump in EPS.

Glaxo’s shares have gained more than 8% so far in 2016, even after dropping nearly 5% the day after the Brexit vote.

Over the longer haul management expects to capitalize on its robust pipeline to improve growth. It has said it expects to launch 11 new products by next year that should generate sales of about $7.9 billion annually (about 22% of last year’s sales).

One potential new product that leverages GlaxoSmithKline vaccine expertise is a novel inoculation for the Zika virus, though that doesn’t factor into the upcoming launch count.

Following a series of feasibility studies, the company has said it will create a Zika vaccine using self-amplifying mRNA (SAM). Unlike using a weakened live virus or dead virus to make a vaccine, the SAM method only uses a bit of genetic code that enters a cell and self-replicates thousands of times.

Unfortunately, it’s tough to guess when any Zika vaccine may hit the market since the development process typically takes a decade or more, even using a proven technology. A number of Glaxo’s competitors, like Sanofi, are also on the hunt, so it is anyone’s guess who will get a vaccine done first.

Despite more than two decades of research, there aren’t any vaccines currently on the market made using SAM technology. But if Glaxo is able to make it work it will provide  many more doses from a single batch of vaccine since it can be administered in lower doses. That would help lower manufacturing costs, so if it is even as effective as another Zika vaccine, it would quickly become the preferred one.

For those worried about investing in a U.K.-based company following the recent Brexit vote, Glaxo also seems to have that under control.  First, only about 13% of its revenue comes from the U.K.  And in its most recent annual report the company has said it doesn’t expect Brexit will cause an “adverse impact,”  and that it has a plan to sidestep the worst of the effects.

Since most of its revenue is generated by vaccines and pharmaceuticals, I would expect demand to be steady regardless of how the U.K.’s separation from Europe shakes out. In fact, since one of the promises “Leave” campaigners made was that at least some of the money saved on E.U. dues would be funneled back into Britain’s National Health Service, it could even be a positive. That does depend on how much faith you put in politician’s having their diagnosis right.

Another potential positive is the drubbing the British pound has taken since the Brexit vote. Being based in the U.K., Glaxo reports in pounds but most of its revenue is in other currencies. That should boost its sales as long as the pound stays anemic.

It’s a bit early to predict a dividend increase this year, but thanks to Glaxo’s improving sales outlook and significant debt and cost cutting initiatives of late, it isn’t off the table. Aside from one special dividend declared last year, the company’s quarterly dividend policy hasn’t moved in two years now.

The Brexit shouldn’t threaten the dividend, and Glaxo might even see some net benefits from it—after the dust has settled.

Benjamin Shepherd is a recognized exchange-traded fund (ETF), mutual fund and stock expert with an extensive background analyzing time-tested funds, including their managers and strategies. Ben looks for investments that have proven themselves in both bull and bear markets. Ben also specializes in covering emerging markets, pinpointing the most dynamic investments in developing nations for market-beating growth.