We recently reaped a nifty 25%, three-week profit on Bristol-Myers Squibb options, but I think many more good things are in store for the company. So I’m writing again to urge you to buy the stock, and I’ll give you a few more, timely, good reasons to do so. Plus, I have a new BMY options play below. 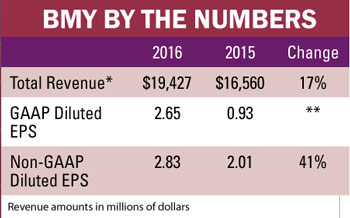 You might be a little gun-shy about -Bristol-Myers right now, but you need to stop thinking about it as a growth darling and start thinking about it as a value stock. The company was flying high last summer when the news broke that Opdivo, its franchise cancer drug, failed to meet expectations in a late-stage trial of previously untreated small-cell lung cancer. The stock was slammed in August, started to bounce back, but took another hit in October when Merck announced better-than-expected results for its own cancer franchise drug that’s a direct competitor to Opdivo, Keytruda.

Last month, Bristol-Myers announced that it would not seek accelerated approval for Opdivo for yet another treatment, while Merck was granted the go-ahead by the Food and Drug Administration. Then BMY missed its earnings expectations, leading to yet another new low. All told, the stock dropped nearly 40% since October 2016.

The blockbuster wars have beaten up the stock, true, but Wall Street is stuck in a past when blockbuster drugs led to big paydays. Although they’ll still be important to profits, because of cost cutting, the block will get smaller and the bust will come more often. So the future for big pharma is about pragmatic business practices: diversified drug portfolios and top-notch research on diseases that include but also go beyond cancer. And that’s what I see in BMY. 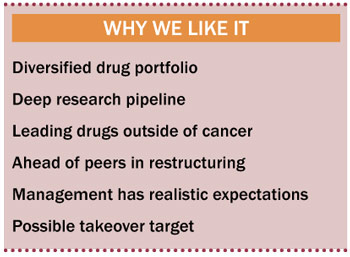 Opdivo has a broad list of other cancer targets besides lung cancer, and the drug is the leader in gastric and colon, bladder, head and neck, melanoma, and renal cancers. Also, while investors have been distracted by what effect the cancer wars between Merck and Bristol-Myers will have, here is something that most miss: BMY won a court battle against Merck, in which it proved that Merck used BMY patents to develop Keytruda. The initial payment was $625 million plus royalties. The royalties could add up to $3 billion. That’s not too shabby for the guys that ran second.

Furthermore, BMY’s research pipeline is full, as the company has four late-stage trials featuring Opdivo combined with another BMY cancer fighter, Yervoy. While other drugmakers favor the old-school, big breakthrough model, Bristol is carefully tending to the strengths in its three business segments for treating diseases: international cancer, non-lung cancer in the U.S., and U.S. lung cancer. So, even if Opdivo or some combination of Opdivo and Yervoy are number 2 in several categories, the revenue and earnings will be significant, given the size and the geographical diversification of the business. 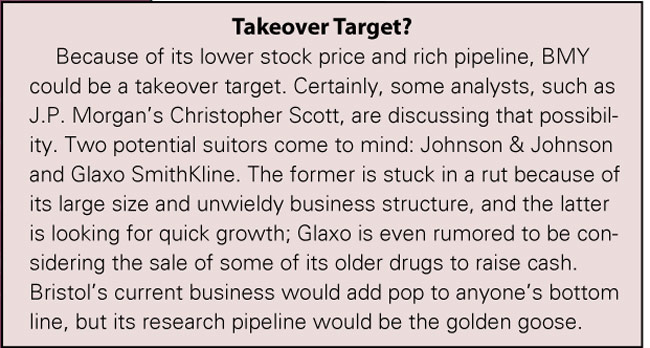 The most underappreciated of BMY’s assets are its arthritis drug Orencia and a medicine that is on its way to becoming the world’s leading blood thinner, Eliquis. Eliquis sales grew 57% to $948 million, while Orencia sales grew 16% to $625 million year-over-year. (Opdivo, on which analysts are souring, still delivered $1.3 billion in global sales last year.) Opdivo sales are still expected to grow, while Orencia and Eliquis are potential billion dollar drugs, as patients who require blood thinners and rheumatoid arthritis drugs are potentially on them for life.

BMY trades at a 19-plus price-to-earnings ratio, and a 73% gross profit margin is expected for 2017, slightly below the drugmaker’s 74% 2016 margin while yielding 3% after a recent dividend increase. With $9 billion of cash equivalents and $2.4 billion in cash, BMY is set to weather any storm. The company’s next earnings release is scheduled for April 26. 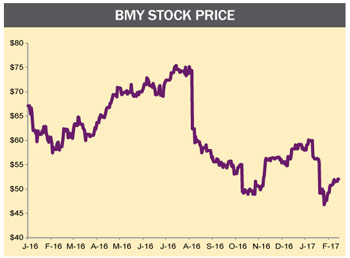 I have a position in BMY.