Profiting from the Gas Glut

The unseasonably warm winter of 2011-12 has sent already depressed natural gas prices spiraling even lower–and the outlook for the commodity is unlikely to improve significantly over the next 12 to 24 months.

This graph tracks anomalous weather conditions from January 2012 to the end of March 2012 by comparing recent temperatures to the average between 1971 and 2000. The US and Canada enjoyed one of the warmest winters on record, with temperatures averaging 5 degrees to 6 degrees Celsius (9 degrees to 11 degrees Fahrenheit) above normal. This unusually warm weather and lower-than-normal precipitation likely boosted the economy in the US and Canada above seasonal norms. 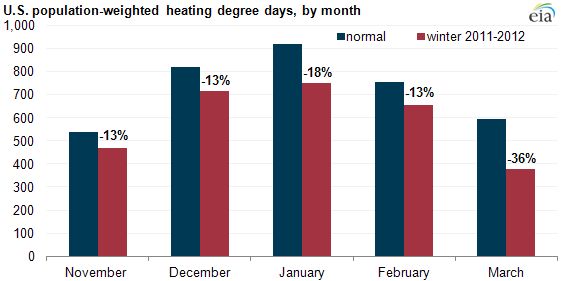 This graph depicts population-weighted HDDs at a national level. Between December and February 2012, the US experienced 13 percent to 18 percent fewer heating degree days than usual. HDDs were about 36 percent below average in March 2012, the warmest March on record.

Investors should remember that weather events are transitory and unpredictable; the cold winters of 2009-10 and 2010-11, for example, stimulated demand for natural gas.

The rapid development of unconventional US natural gas and oil shale fields such as the Haynesville Shale in Louisiana, the Eagle Ford in Texas and the Marcellus Shale in Appalachia has led to a surge in US natural gas production.

Chesapeake Energy Corp (NYSE: CHK) and a number of other major producers have announced plans to reduce drilling activity targeting natural gas; with natural gas fetching less than $2 per million British thermal units, even the fields with low production costs are uneconomic.

The number of rigs actively drilling for natural gas in the US has tumbled from more than 900 units in December 2012 to only 613 rigs. In fact, the gas-directed rig count is lower today than at the height of the 2008-09 financial crisis. At one point in 2008, more than 1,600 drilling rigs targeted natural gas.

Subscribers often ask whether the decline in natural gas-directed drilling activity will relieve the supply glut. In the near to intermediate term, these moves won’t stem production and allow the price of natural gas to recover.

Although the great migration of drilling rigs from the Haynesville Shale and other dry-gas fields has continued apace for several months, several offsetting factors have ensured that US marketed gas production remains near record levels.

For one, producers can now sink more wells and produce more gas using fewer rigs. For example, in 2007, it took Southwestern Energy (NYSE: SWN) about 17 days to drill a well in Arkansas’ Fayetteville Shale, compared to about 12 days in 2010 and eight days in 2011. In other words, the company can drill roughly the same number of wells using half as many rigs.

In addition, Southwestern Energy has increased the efficiency of its operations by drilling longer laterals, or the horizontal portion of the well. Over the past several years, US producers have found that increasing the number of fracturing stages in a horizontal well can also enhance output. In some shale plays, producers have more than 40 hydraulic fracturing sites on a single lateral. Hydraulic fracturing is a process whereby producers pump a liquid into a shale reservoir under such tremendous pressure that it cracks the reservoir rock.

By drilling longer laterals and adding fracturing stages, producers can generate higher initial production rates and increase the total amount of hydrocarbons recovered from each well. All these technological and methodological advances add up to higher production from fewer wells. 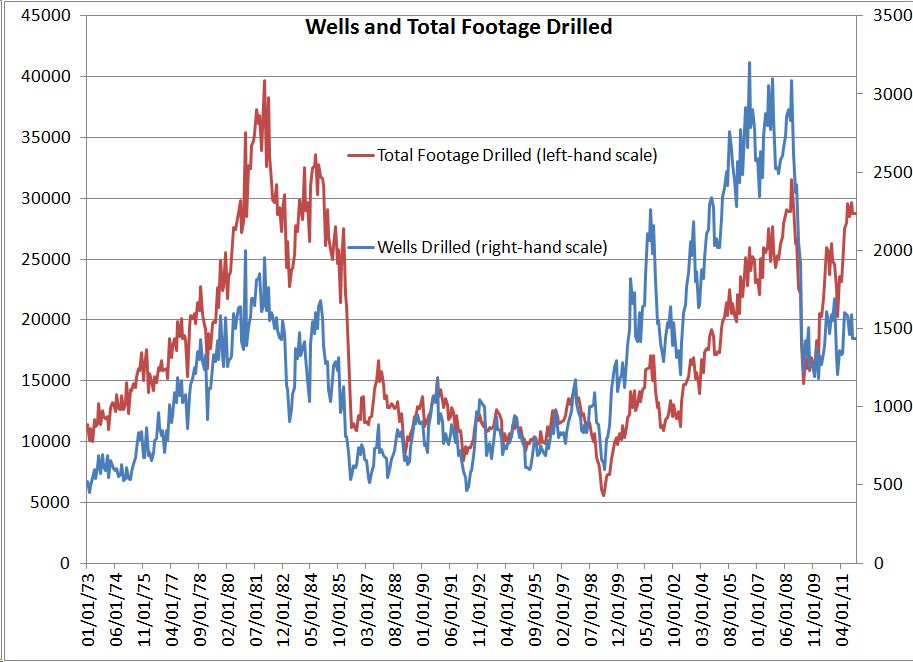 This graph depicts the number of newly drilled exploratory and developmental wells targeting natural gas. Although the US gas-directed rig count dropped to 800 rigs by the end of January from 1,000 in mid-2010, the number of wells drilled hasn’t changed measurably–a sure sign that producers are drilling more wells with fewer rigs.

According to the US Energy Information Administration (EIA), the 4,219 domestic oil and gas wells that producers sank in January 2012 sported a mean length of 6,809. A decade ago, producers drilled 2,446 wells that averaged 5,440 feet. Longer wells expose more of the productive regions in a formation and translate into higher production rates. 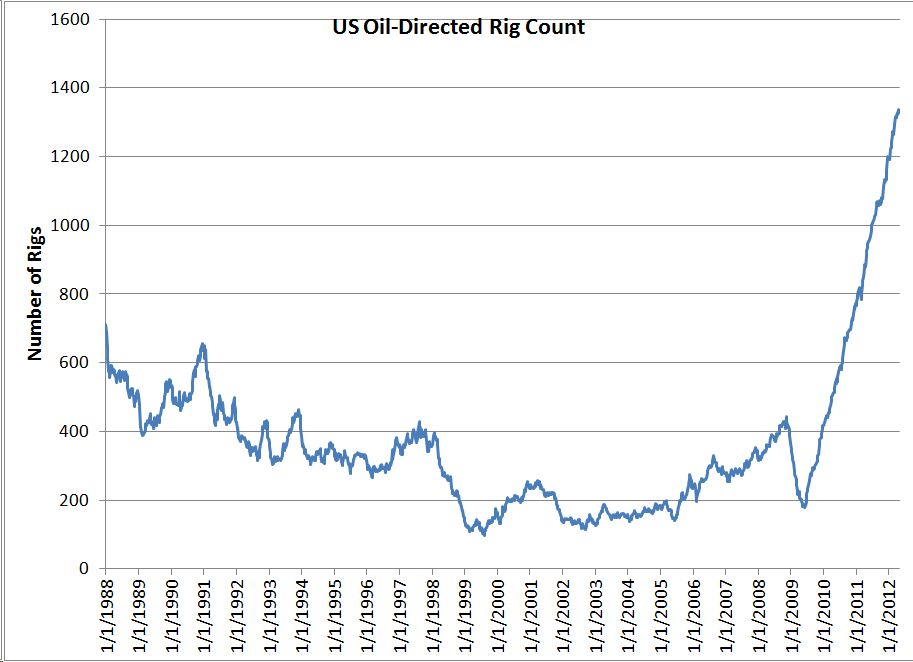 But these wells often produce volumes of natural gas and natural gas liquids (NGL), a group of heavier hydrocarbons that includes ethane, propane and butane. The Bakken Shale in North Dakota and Montana and the Permian Basin in west Texas contain significant quantities of associated natural gas. Gas-directed drilling activity continues to wane, but production of this commodity from oil wells continues to increase as operators shift their focus to liquids-rich shale plays.

State-level data on the volume of natural gas produced from wells targeting gas and the volume flowed from oil wells corroborates this theory, even though the most recent EIA data is from more than a year ago. 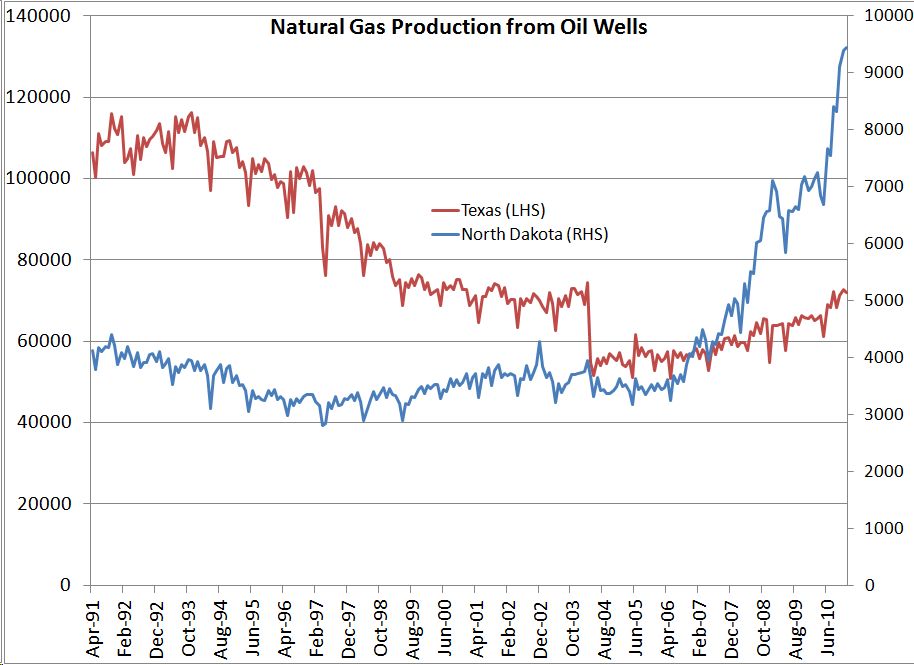 Most drilling activity in North Dakota targets the oil-rich Bakken Shale formation; oil production in the state has soared almost fivefold in the past half-decade. Natural gas production from oil wells in North Dakota increased by 53 percent between December 2008 and December 2010. As oil-directed drilling activity in the state has picked up significantly since late 2010, the production of associated gas has likely continued to climb.

The same trends are apparent in Texas. Although operators in the Permian Basin and parts of the Eagle Ford Shale target crude oil, gas production from Texas’ oil wells jumped by almost one-quarter in the two years ended Dec. 31, 2010.

Robust production of natural gas, coupled with weather-weakened demand this winter, has pushed seasonal inventories of the energy commodity to record highs. 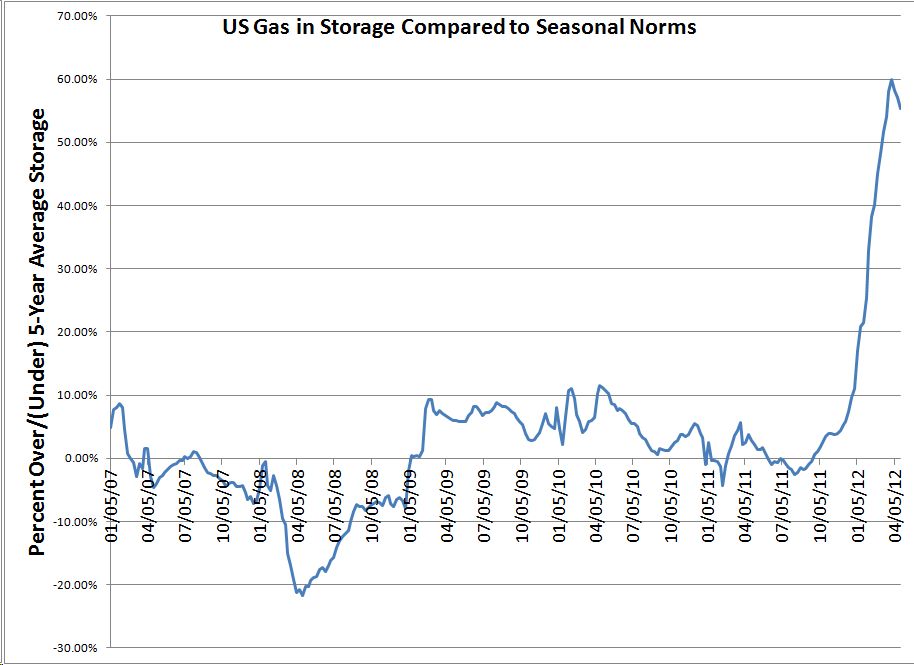 This graph tracks the volume of US natural gas in storage as a percentage of the five-year seasonal average. US gas inventories have generally remained elevated over the past two years, but the 2011-12 winter that never was sent storage levels surging to more than 50 percent above the seasonal average.

The US could reach peak storage capacity between now and next fall, forcing producers to shut-in their wells to rebalance the supply side of the equation.

In the near term, an unusually cold 2012-12 winter would help alleviate some of the pressure on US natural gas prices and perhaps allow the beaten-down commodity to rally to $3 per million British thermal units. Other upside catalysts are years away.

As a closed market with virtually no capacity to export liquefied natural gas (LNG), US producers lack a critical release valve that could enable them to take advantage of higher prices in Europe and Asia. A number of operators have announced plans to build LNG export facilities, but these terminals are unlikely to come onstream until at least mid-decade.

At the same time, depressed natural gas prices will continue to encourage electric utilities and manufacturers to expand their use of this feedstock. But these new generation facilities won’t be built overnight.

In this environment, we prefer well-capitalized names whose production mix is weighted toward oil and natural gas liquids, hydrocarbons that offer superior wellhead economics. At the same time, Chesapeake Energy Corp and other US independents will continue to monetize gas-focused acreage to support the migration toward liquids-rich plays.

Bottom line: The best way for investors to profit from natural gas is to focus on names that are scooping up high-quality gas-focused acreage at valuations that guarantee a solid rate of return even in the current environment.

Quarterly earnings season is winding down. Here are the remaining release dates for our Portfolio holdings. Asterisks indicate that the date is estimated.