One of the top 10 gas producers in the world, Norway has supplied much of Europe’s energy needs since the development of the Troll, Oseburg, Ekofisk and other North Sea oil fields in the 1970s and 1980s.

But output from these giants has diminished over time. Norway’s average monthly oil output peaked at about 3.4 million barrels per day in 2011 and has declined steadily over the past decade to 1.6 million barrels per day in May 2012. Meanwhile, the nation’s production of natural gas has tumbled roughly 5 percent from its 2010 zenith of 10.3 billion cubic feet per day. 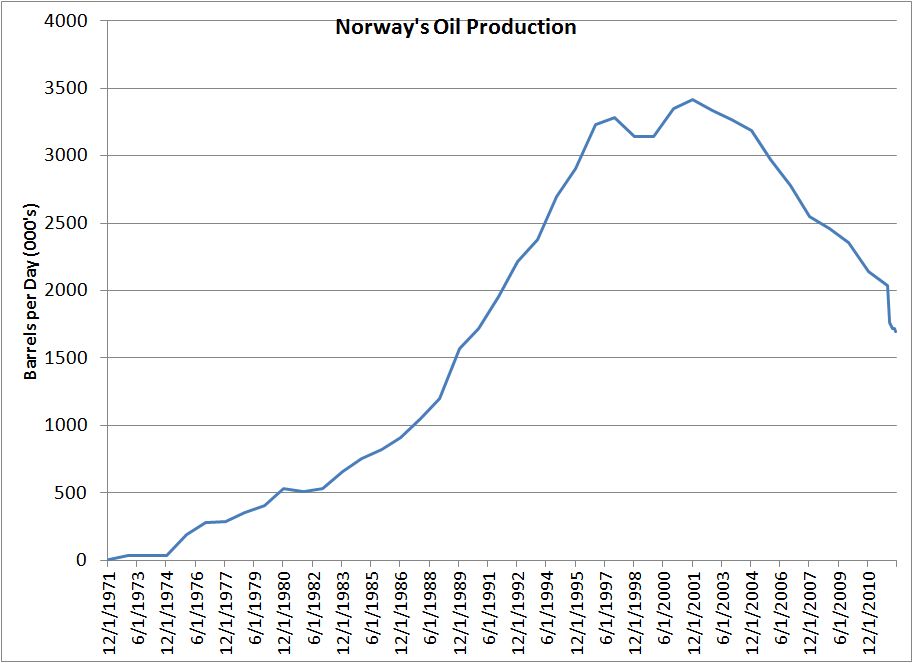 However, a series of major oil and gas field discoveries in the Barents Sea offshore Hammerfest could halt or even reverse the decline in Norway’s oil and gas production. The Norwegian Petroleum Directorate (NPD) estimates that Scandinavian nation’s portion of the Barents Sea could contain 6 billion barrels of oil equivalent reserves.

The NPD’s figure omits an area that had been the subject of a 40-year dispute with Russia, a disagreement that the two nations finally resolved in summer 2011. This deal could unlock billions of barrels of additional reserves for Norway an highlights the Arctic as one of the final frontiers for oil and gas exploration and production.

Norway’s national oil company Statoil (Oslo: STL, NYSE: STO) and a host of other producers have announced a number significant oil and gas discoveries in this remote region.

Instead of the traditional fixed or floating production units found at many offshore installations, Snohvit’s infrastructure rests on the seabed and includes a 90-mile subsea pipeline that transports the output to Melkoya Island. The system produces about 13,000 metric tons of LNG, 2,000 metric tons of condensate and 900 metric tons of liquefied petroleum gases daily.

Statoil expects to bring additional Snohvit wells onstream between 2014 and 2015 and is weighing whether to build a second liquefaction train at Melkoya that would serve the play and other developments in the Barents Sea.

Located roughly 35 miles south of Snohvit, the Goliat oil and gas installation is slated to produce first oil in 2013. Italy-based energy giant Eni (Milan: ENI, NYSE: E) owns a 65 percent interest in the play, while Statoil holds the remaining equity stake. The development plan calls for the drilling of 22 wells and re-injecting the associated water and natural gas to maintain reservoir pressure.

Statoil’s most recent finds in the Barents Sea are even more exciting.

The national oil company in April 2011 announced that an exploratory well sunk about 60 miles north of Snohvit encountered a column of crude oil that was almost 300 feet in length and a column of natural gas that stretched about 100 feet. Initial estimates pegged the contents of the Skrugard play at roughly 250 million barrels of recoverable oil, a figure that has steadily increased as the firm drills additional test wells and delineates the field.

About 5 miles southwest of Skrugard, the Havis discovery is estimated to contain between 200 and 300 million barrels of recoverable oil. The initial well drilled in this prospect hit a 150-foot column of natural gas and a 400-foot column of crude oil.

Statoil believes that these two discoveries are separate fields, as opposed to different parts of the same oil-bearing structure. Statoil operates these fields and holds a 50 percent ownership interest, while Eni has a 30 percent stake and Petoro owns the remaining 20 percent.

Producers have drilled 92 exploratory wells in the Barents Sea since the 1980s, but these efforts have yielded few major discoveries. With recent drilling activity uncovering some impressive discoveries, investors should be on the lookout for more well results in the remainder of 2012 and 2013.

Although experts expect Russia’s portion of the Barents Sea to contain higher volumes of oil and gas, the harsh conditions present substantial challenges. Norway’s blocks in the Barents Sea benefits from the Gulf Stream, which leads to higher temperatures than other regions that are at similar latitudes. Accordingly, the Norwegian Barents Sea contains less ice than its Russian counterpart.