Indian Pharma: The End of the Beginning

Indian pharmaceutical companies are on track for a long-term compound annual growth rate (CAGR) of more than 10 percent, and remain one of the pillars of growth in the global pharmaceutical industry.

For years, Indian pharmaceutical companies have remained competitive because of the low costs resulting from their manufacturing base in India.

Because of the affordability of their products and the technological prowess with which they’re produced, Indian pharmaceutical firms should continue to gain market share in developed markets, especially the US. As the chart below indicates, generic drugs’ share of the US pharmaceutical market is around 19 percent and growing with each passing year.

Indian companies earn roughly 29 percent of their revenue from the US, so America will continue to be an important market for the Subcontinent’s firms. Indian companies will expand their margins as they further establish themselves in the US. 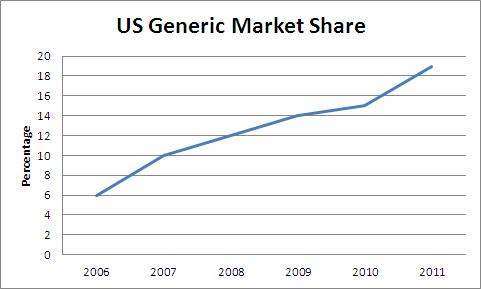 The domestic Indian pharmaceutical market is fragmented. That has led to downward pressure on earnings, although longer term it should present an opportunity for the biggest players. These firms should increase their market share as they achieve greater penetration in the so-called Tier-2 and Tier-3 cities (i.e., India’s smaller cities).

Furthermore, the larger companies could soon initiate a wave of mergers and acquisitions once they start to pursue industry consolidation in earnest. The larger players will start buying smaller regional companies that own solid brands, but there could also be large-scale acquisitions.

Emerging markets account for around 50 percent of Indian pharma’s revenue, with 30 percent of sales originating in India itself.

Although the US remains an attractive market for these firms, emerging economies will account for a greater share of future growth. Africa (particularly South Africa) and South America are two of the more promising growth markets, although it will take time for them to achieve sufficient scale and emerge as key revenue drivers.

Equity investors have traditionally viewed pharmaceuticals as a defensive sector, especially when compared to the volatility of the broader Indian market. The chart below compares India’s BSE Sensex Index to the BSE India Healthcare Index, the latter of which is dominated by pharmaceutical companies, which account for 65 percent of the index’s value.

Indian pharmaceutical firms trade at around 18 times trailing earnings, which is in line with the sector’s historical average. Given the global economic uncertainty, attractive valuations alone won’t drive growth in share prices. Instead, the stocks in this industry will need to demonstrate earnings growth before they can head higher. 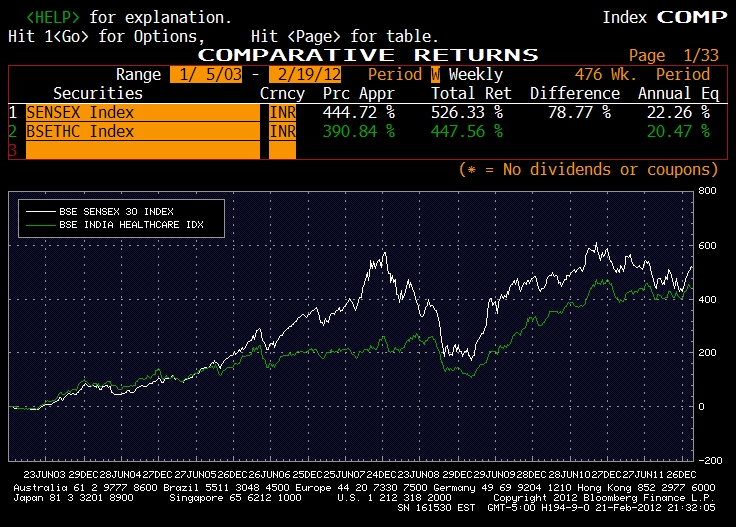 The company is the country’s second-largest drugmaker, with primary business lines in the US, Europe, Russia and India. In fact, 60 percent of the firm’s sales are derived outside of its home market. The Hyderabad-based company boasts a strong research and development unit focused on cancer, diabetes, cardiovascular, inflammation and bacterial infections.

As the chart below indicates, the firm’s operations in India and the US dominate revenue, while active pharmaceutical ingredients (API) sales are also a substantial component of overall revenue. The API category covers compounds that are intended for use as ingredients in the manufacture of pharmaceutical products. 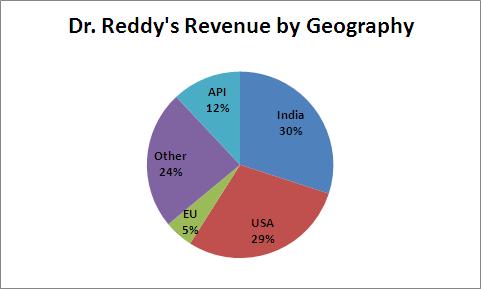 The company has a smaller exposure to India than some of its competitors because of its successful effort to expand its presence in the US. At present, Dr. Reddy’s has 70 abbreviated new drug applications (ANDA) pending approval from the US Food and Drug Administration (FDA). The company has an impressive drug pipeline in the US, and has steadily grown despite the market’s occasional indifference.

Last year, for example, the market was slow to recognize Dr. Reddy’s potential for success on the antibiotics front. The company bought a manufacturing facility in the UK from pharmaceutical giant GlaxoSmithKline (NYSE: GSK) and uses it to produce the Augmentin and Amoxil brands that it sells in the US.

These drugs have enabled the company’s antibiotics segment to gain market share, with industry estimates that the market for these two drugs totals roughly USD700 million. Even better, these drugs face limited competition from generics.

Meanwhile, the company has also been increasing its presence in India at a rapid pace, and has been investigating the possibility of acquiring some smaller competitors in order to quickly gain market share. And the company’s expansion into other emerging markets should also fuel growth.

Dr. Reddy’s strategic alliance with GlaxoSmithKline is important in this regard. Under the terms of the alliance, which was formed in 2009, Dr. Reddy’s will develop and manufacture generic drugs for markets in Latin America, Asia and Africa. GlaxoSmithKline will then leverage its corporate infrastructure to market and sell these products. It’s still too early for the results of this partnership to show up on Dr. Reddy’s bottom line, but the alliance should make a substantial contribution to earnings in the future.

Dr. Reddy’s is poised for another promising year. Although pharmaceutical firms are notoriously difficult to evaluate, the market has yet to appreciate Dr. Reddy’s true potential.

The stock has produced substantial gains since its initial recommendation in February 2006, but there is more upside to come. Although there may be periodic pauses in the stock’s ascent, Dr. Reddy’s will continue to reward patient investors. Dr. Reddy’s Laboratories remains a buy up to USD37.