An African Bank Shifts Its Focus

Standard Bank Group (South Africa: SBK, OTC: SBGOY) reported solid full-year results for 2011, with headline earnings rising 21 percent year over year. However, the South African bank is in the midst of a turnaround to improve operations and that somewhat detracted from its performance.

The bank’s headline earnings from the South African market increased 20 percent versus the prior year, while earnings from its operations in the rest of Africa rose 38 percent. Its retail banking segment grew earnings 40 percent from the prior year. Non-interest income was up 3 percent, driven mainly by client acquisition and an 11 percent growth in fees and commissions.

The bank added over 1.3 million personal and business banking accounts in its South African segment, and nearly 285,000 transactional banking accounts in the rest of Africa. Costs were essentially flat last year, which reflects the bank’s commitment to keeping growth in its expenses below double digits. Management expects costs to rise between 8 percent and 9 percent this year. 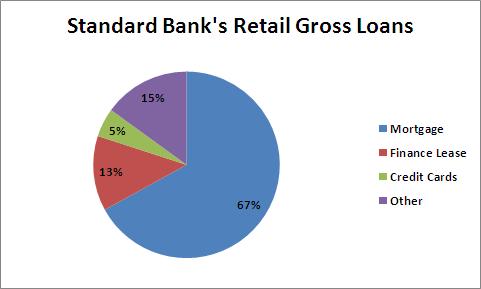 When ranked according to assets and earnings, Standard Bank is the largest South African banking group. The bank has more than USD198 billion assets on its balance sheet. The group operates in retail and commercial banking, credit cards, investment banking and wealth management. Its operations are focused on emerging markets, with 1103 branches dispersed across 18 African countries and 20 countries outside of Africa.

In recent years, Standard Bank Group’s performance has been hindered by mistakes made in its foreign (i.e., non-African) operations. Management has been addressing the issue by scaling back its international operations through asset sales and cuts in expenditures.

The bank has reined in staff costs, which only rose 4 percent from the previous year and now account for 55.1 percent of operating expenses. In order to avoid having job cuts impair the bank’s growth potential, management primarily lowered its managerial and executive headcount in its offices in Johannesburg and London. Standard Bank has a successful history of implementing such cost-saving measures while still making strides in growth and profitability. Ten years ago, for example, the bank cut 7 percent of its workforce without constraining the growth of its business.

At year end, the bank had deployed 21 percent of its capital to invest in its international (i.e., non-African) operations. Last year, Standard Bank sold its operations in Russia and Argentina. The former was sold for USD372 million, of which USD150 million has been repatriated. The remaining balance is sitting in the bank’s Luxembourg-based holding company (Standard International Holdings). It should be repatriated once regulators allow it to be transferred to South Africa. The sale of its Argentinean segment awaits regulatory approval, but once the deal is closed, the proceeds will be moved to South Africa.

Standard Bank’s operations in Turkey and Brazil are also slated to be sold this year, with offers already received for its Turkish business. The group is also scaling back its operations in England.

Standard Bank maintains a crucial relationship with the Industrial Commercial Bank of China (Hong Kong: 1398), the largest of China’s Big Four lenders. ICBC owns a 20 percent stake in Standard Bank, an investment aimed at making Standard Bank a conduit between China and Africa. China is increasingly turning to Africa as a key resource necessary to support the Mainland’s torrid pace of economic growth.

The bank has steadily grown its presence throughout the rest of Africa, with Nigeria and Kenya being two of the primary markets for growth in Africa. In Nigeria, for instance, Standard Bank has around 100 branches, but it is planning to increase the number to around 300 in the not so distant future. Still, both Nigeria and Kenya are extraordinarily difficult markets in which to operate due to volatility and the level of domestic and international competition.

For now, its operations in the rest of Africa only contribute around 12 percent to the group’s profits. But the bank is focused on expanding its presence in the rest of the continent, so further growth from this segment should be achieved in the years to come. The group is targeting 18 percent growth in its return on equity, up from the current level of 14 percent.

However, management has decided that growth must occur organically rather than via acquisition. This strategy will take time to unfold, as the bank is still engineering an operational turnaround. Consequently, investors who hold shares of Standard Bank must be patient.

The securities in our Long-Term Holdings Portfolio are arranged in order of preference. Standard Bank Group falls within the lower half of this listing, which means that subscribers should allocate their funds toward other companies before committing new money to its shares. The stock’s future performance is based on the bank’s ability to extend its brand to the rest of Africa. We believe the bank will eventually achieve that end, and that its stock will trade higher.

Standard Bank is a pure play on emerging market banking growth. As such, an investment in its stock entails considerable risk, especially in the short term. For this reason, investors should hold it in a well-diversified portfolio and have a willingness to endure volatility. Its shares offer a 3 percent dividend yield, a decent income stream for shareholders while they await the bank’s growth strategy to come to fruition. Standard Bank Group is a buy up to USD30.