We added Standard Chartered (London: STAN, OTC: SCBFF) to the Long-Term Holdings Portfolio in late 2008 on the premise that banks are one of the best investment vehicles to gain exposure to emerging markets. After all, the banking industry is involved with the lifeblood of every economy, acting as a facilitator of economic activity (via loans) and a custodian of citizens’ money (through deposits).

Standard Chartered is one of the few banks in the world to have posted strong and growing profits in each of the last nine years. 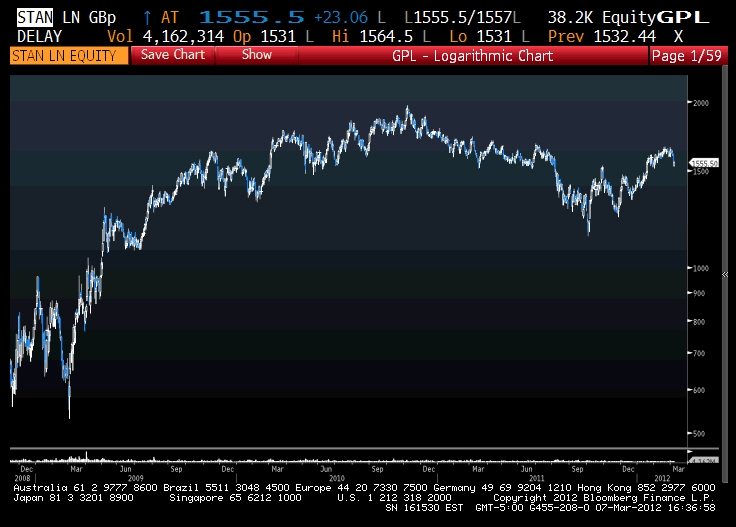 Standard Chartered is not your typical lender. Although the company is headquartered in the UK, its primary focus is the emerging markets. Asia is Standard Chartered’s most important geographical region, accounting for 83 percent of revenue. Consequently, the bank offers investors direct exposure to fast-growing emerging economies without the dilution of mature markets.

Standard Chartered’s performance last year was typically solid. The bank beat expectations by generating USD17.6 billion in revenue, maintaining its 10 percent annual growth rate. By comparison, operating expenses have grown by roughly 8 percent annually and came in at USD9.7 billion. As is evident from these numbers, the bank continues to strike a good balance between revenue and expenses.

Although India has gradually emerged as a significant contributor to the bank’s earnings, the short-term outlook remains weak. The Indian economy has been hit by governance-related issues, slowing domestic demand, weak business sentiment and high interest rates. These problems may persist for a little while longer, and therefore the country’s contribution to profits may remain subdued. However, India’s economy is on the mend, so the Subcontinent could contribute more substantially toward growth later this year.

In South Korea, the bank’s performance was negatively impacted by slackening domestic demand. Additionally, Standard Chartered had to contend with a labor strike. Though the dispute has since been settled, the strike is estimated to have cost the bank roughly USD50 million in lost revenue.

Among its operating segments, the consumer division grew by 12 percent, while wholesale banking grew by 9 percent. The trade finance division grew by 25 percent last year, which provided a major boost to the bank’s earnings. 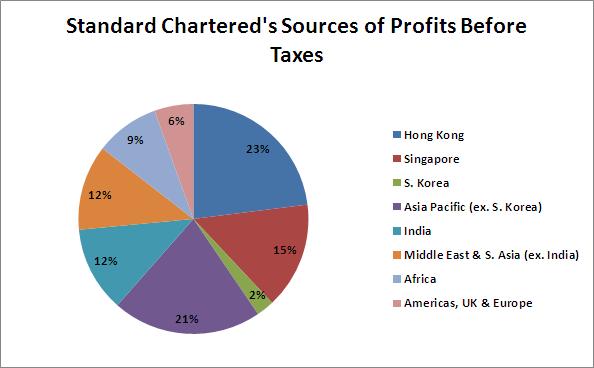 Standard Chartered’s performance during the second half of 2011 has enabled it to stay on pace to produce 10 percent annualized revenue growth during 2012.

In the latter half of 2011, loan volume expanded while the loan-to-deposit ratio fell to 76 percent due to solid deposit growth. Standard Chartered has an 11.8 percent Tier 1 capital ratio and a strong and growing balance sheet. The bank is now in the enviable position of self funding its growth.

Although shares of Standard Chartered are not as cheap as they were a year ago, they currently trade at a relatively attractive valuation of 1.4 times book value and 10.8 times trailing earnings, while offering a 3.5 percent dividend yield. Its dividends are sustainable and are paid semi-annually. Standard Chartered remains a buy up to GBP1,830 in London and USD30 in the OTC market. As always, we prefer the local shares.