Asian markets have generally underperformed other emerging markets, especially oil exporters, during periods when oil prices are on the rise. The reason for the underperformance is that Asian economies, with the exception of Malaysia, are net importers of oil. As the chart below indicates, oil prices (Brent crude spot price) have shot past the USD120 mark and are very close to the all-time high of USD144.4 set in July 2008. 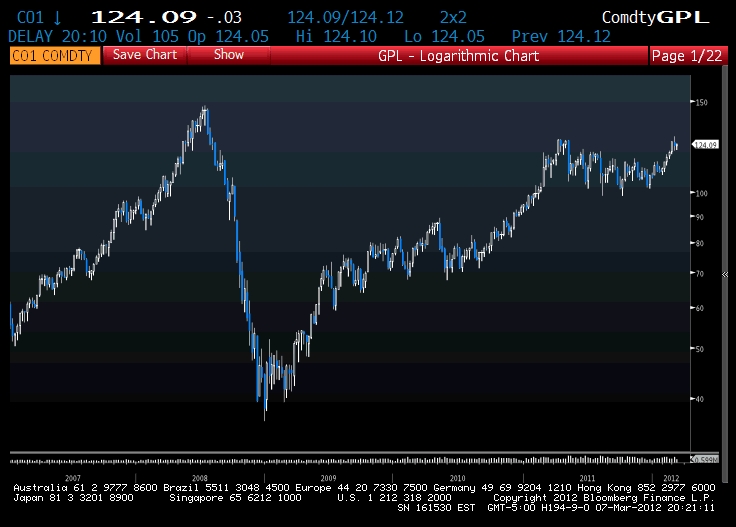 Last year, the rise in the price of oil stemmed from three factors: the uprisings in the Middle East during the Arab Spring; strong global growth spurring higher demand; and further monetary easing by the world’s central banks. While the political instability in the Arab world remains an ongoing uncertainty, the latter two factors are actually positive developments.

Because higher oil prices can be induced by so-called positive shocks, investors can better understand the portent of higher prices when they take this fuller context into consideration. After all, the steady growth of Asian economies has been the major reason why oil prices have been ascending. Some may recall that a little over 20 years ago, at the time of Iraq’s invasion of Kuwait, Brent oil was trading at around USD15.

This time around, however, the spike in the price of oil has more to do with uncertainty over tensions with Iran than anything else. Price movements for other commodities (e.g., copper and iron ore) are not nearly as strong, which suggests that fear regarding the prospect of military action against Iran is adding a substantial risk premium to the price of oil. Depending upon how this issue is resolved, the price of oil will either skyrocket or correct.

Of course, the question is which decision regarding the use of force will prevail. As things stand now, an attack on Iran will almost certainly push prices higher, while a more constructive approach involving diplomacy could deflate the price of oil, possibly to the tune of USD20 for Brent crude.

A muddle-through scenario involving continued threats of the use of force without corresponding military action will allow the markets to adjust to a relatively higher oil price without suffering a true spike. In other words, if a rise in the price of oil happens slowly over time, then it shouldn’t significantly undermine Asian economies.

In such an environment, Asian markets may not only be able to outperform, they could also produce outright gains for investors. When the price of oil rose by about 25 percent last year, Asian markets also climbed higher during the same period (mid-February to early April). But during periods when oil prices quickly spiked higher, Asian markets have fallen precipitously.

As a general rule, the Malaysian market tends to perform best relative to other Asian markets during periods of higher oil prices. That’s because Malaysia is a net exporter of oil.

However, Malaysia has underperformed South Korea and Singapore this year due to uncertainty surrounding its upcoming general elections. As a result, foreign investors have been reluctant to commit their funds to Malaysia this year; foreign investment in Malaysia currently stands around 22 percent.

As we noted earlier this year, the Malaysian government has been in election mode for months, and has introduced initiatives to spur growth and lower the cost of living for the lower income strata. (See “The Time is Right for Malaysia.”)

Prime Minister Najib Razak has a decent chance of getting reelected. But the main question is if his path to victory will allow him to form a strong government or if the country will end up with a hung parliament.

Since the current government has delivered on its reforms, we expect the prime minister to enjoy a mandate that flows through to parliament. If this outcome materializes, then the market will quickly head higher, regardless of the price of oil. For that reason, iShares MSCI Malaysia Index Fund remains a buy up to USD15.

The Indian economy is far more vulnerable to higher oil prices than Malaysia. Although oil represents a little more than 10 percent of the country’s inflation basket and does not directly impact inflation in a dramatic manner, the government’s fuel subsidies create a problem.

Because of India’s weak fiscal position and its need to finance its current account deficit, the additional cost of energy-related subsidies are a burden on the economy. When added to the backdrop of generally weaker economic growth, India could suffer if oil prices rise for a prolonged period. Consequently, investors who are interested in Indian equities must be prepared to endure short-term volatility.

When such subsidies are coupled with some Asian governments’ convoluted pricing mechanisms that can lead to a counterintuitive situation where Asian oil-related equities actually suffer during periods of rising oil prices. This especially holds true for Chinese and Indian companies, so investors should be cautious about playing the energy sector in these countries during such times.

One stock that should benefit during periods of higher oil prices is Singapore’s Keppel Corp (OTC: KPELY). As we wrote recently, the company is our top play on the global energy and infrastructure boom, as it is a big player in the construction of offshore oil and gas platforms. (See “Deepwater Dynamo.”)

The deepwater market remains relatively tight, and utilization of the global semisubmersible fleet is already at 88 percent. According to industry sources, there are only eight uncontracted deepwater rigs coming to market through the first quarter of next year.

However, the company also has a domestic-oriented business that could be negatively affected by such an environment, as roughly 5 percent of Singapore’s gross domestic product (GDP) goes toward oil imports.

Nevertheless, Singapore’s market has performed well this year because of rising exports. Electronic exports are traditionally a good indicator for Singapore’s stock market. For most of last year, electronic exports were weak, but now they seem to be benefitting from an inventory restocking cycle. If this observation holds true, then Singapore’s GDP and stock market should soon move toward the upside.

As the chart below indicates, the two major bottoms for electronic exports occurred during the collapse of the Internet bubble in 2001 and the more recent downturn during the 2008-09 global financial recession. Since the more recent bottom in October of last year, a steady recovery has been underway. Still, the sustainability of the current momentum will be seriously tested next quarter. 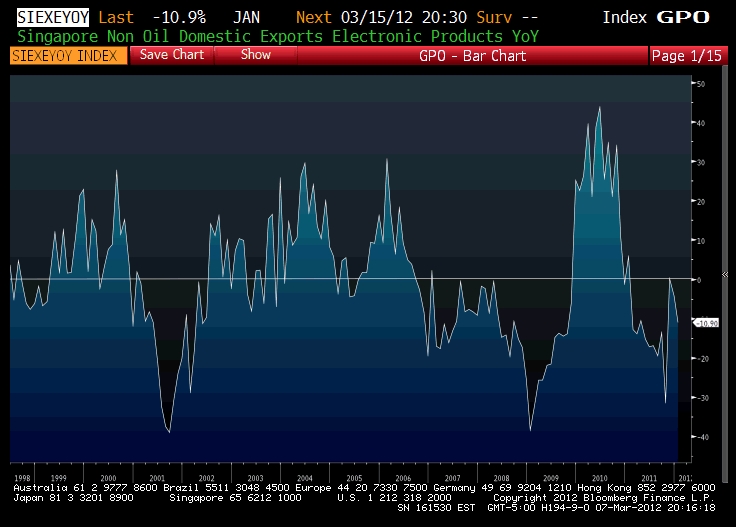 Keppel Corp offers exposure to higher oil prices as well as to the domestic economy, mainly through its real estate business. The stock should have a place in a well-diversified portfolio. Buy Keppel up to USD20. 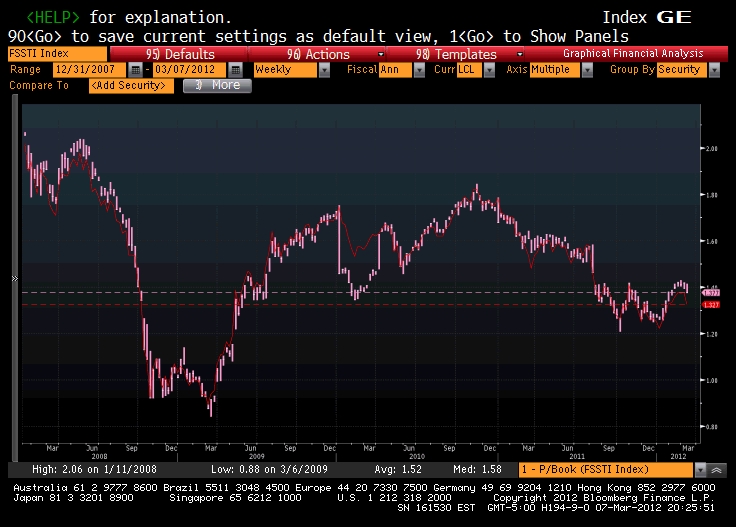