No Love, No Sweat for BASF

While its top rivals weave a fast-paced mating dance, the chemicals maker BASF (OTC: BASFY) stands aloof. The solid German corporate citizen flirted a bit, but never found a match to its liking and now looks like the odd man out in the current rush of industry mergers.

So while Dow Chemical pairs off with DuPont, Bayer with Monsanto and ChemChina with Syngenta, BASF tinkers at the margins of its business portfolio. Profit growth has lately tailed off, so the company continues to fight its way up the value chain and attack costs.

This is not the stuff of breathless get-rich-quick pitches for sure. And yet plodding BASF has handily outperformed the competition where it matters most – in shareholder returns – over the long haul. 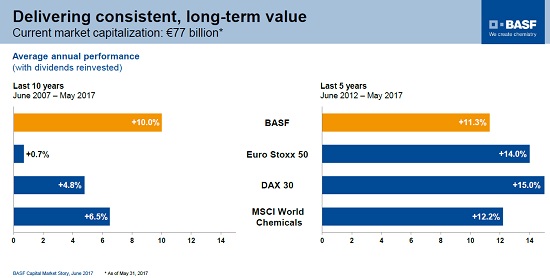 This advanced global supplier of chemicals, materials, pesticides and food ingredients is the next stop on our European shopping spree, which kicked off in style last week with the purchase of Mercedes maker Daimler.

Like Daimler, BASF is benefiting from a recent pickup in global growth and in particular from the cyclical recovery underway in Europe. Like Daimler, it offers a decent and secure income stream with upside if the growth continues.

The current dividend yield is 3.6%, based on the 2016 payout that amounted to just 36% of cash flow from operations and 77% of free cash flow. These numbers mean BASF can meet its goal of raising or maintaining the annual dividend even if the growth were to temporarily falter.

At the moment, however, things continue trending in the right direction. Volumes were up 8% year-over-year in the first quarter of 2017, and prices rose 8% as well.

With annual global revenue of $66 billion and a strong presence on every continent, BASF isn’t going to get pushed around by its bulked up rivals. In fact, if diminished competition bolsters prices BASF will benefit as well, without suffering the cost and the disruption of a major merger.

BASF did reportedly consider a tie-up with U.S. agricultural chemicals supplier FMC last year, only to back off. Then FMC snagged the crop protection business DuPont is divesting as a condition of its merger with Dow.

BASF and FMC might still end up together if the financial calculus driving industry mergers proves irresistible. But don’t get caught up in this corporate Game of Thrones; focus instead on the strong income generation and the surging sales.

As noted previously, U.S. investors are better off holding German equities in an individual retirement account, thanks to a bilateral tax treaty. The withholding tax rate on the dividend in an IRA will be 15%, versus 26% elsewhere.

If I’m right, the dividend will be a modest part of BASF’s total return over the next year or two.

Holding this security in a taxable brokerage account would also incur a 15% tax rate, plus you get to deduct those foreign taxes on your Federal return, no? If held within a retirement account you only get the 15% rate, but no foreign tax deduction. And this is why I farm my tax return preparation out to an accountant. The investing part is hard enough.

My understanding, based on reading, is that the withholding rate in a taxable account is significantly higher, though you could then apply for a partial rebate through the broker. But I’m not an accountant, so glad you have one! Thanks for reading.