Tomorrow is the 228th anniversary of the storming of the Bastille, the watershed moment of the French Revolution. The next French evolution will have the Brexit-tossed London bankers storming the available commercial real estate in La Defense, the Paris financial district.

The government installed by newly elected President Emmanuel Macron is counting on that, and has already pledged to abolish nuisance taxes on the industry.

Those well-heeled migrants will require the latest building climate and security controls, along with critical power backup for their data.

The leading provider of those technologies is headquartered a short distance away. Schneider Electric (OTC: SBGSY) is our third and next-to-last stop on a tour of undervalued European dividend stocks levered to the global industrial recovery. 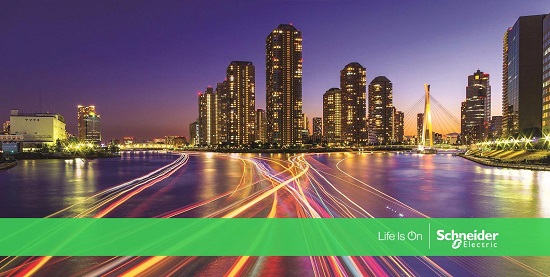 Growth eluded Schneider for most of last year and the company retrenched, selling off a couple of non-core businesses and foregoing some low-value projects to focus on cost-cutting and margins.

Excluding the disposals and currency effects, revenue slipped 1% last year. Yet free cash flow rose 8% to a record. It fully covered a dividend currently yielding 2.8% as well as a large share buyback that cost almost as much, for a total shareholder return yield above 5%.

In the first quarter of 2017, all of Schneider’s business segments save for electrical transmission registered a pickup in growth. China, India, Russia and other emerging markets accounting for 41% of last year’s sales paced the gains, and Schneider also reported broad building automation demand spanning Asia, the U.S. and Western Europe. 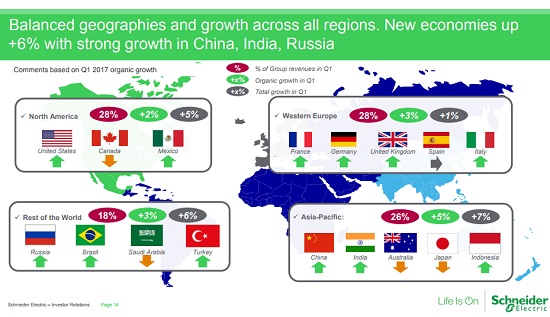 Excluding the disposals and currency gains Q1 sales were up 3% year-over-year. Schneider should have little trouble meeting annual guidance for growth of 1-3% excluding the transmission infrastructure segment and paying a slightly higher dividend. Last year it increased the payout by just 2%.

I don’t want to leave the impression that the Brexit-fueled exodus of London bankers will prove material. Schneider is probably too large and well-diversified for that, with last year’s 25 billion euros in revenue divided almost evenly between North America, Western Europe, Asia Pacific and the rest of the world.

Also, I would be surprised if any acquisition from this European shopping trip, whether Daimler, BASF, Schneider or the one I will write up early next week, ended up the portfolio’s top performer. These are large, mature conglomerates that typically grind out modest growth, with corporate cultures traditionally focused on all the stakeholders, not just shareholders.

By the same token, I see very little downside here for the next year at least, and the possibility of significant capital gains on the back of a multi-year global recovery. And each of these companies does have significant technology assets. Schneider is investing 5% of revenue in R&D, and is a promising play on smart grids and the broader trends of pervasive automation and connectivity.

Note that Schneider dividends paid in the U.S. are subject to a 30% French withholding tax. As with other withholdings of overseas dividends, they can be credited against U.S. tax obligations on Internal Revenue Service form 1116.