The three I’ve recommended on the prior stops of this bargain-hunting tour – Daimler, BASF and Schneider Electric – are global concerns that happen to be particularly strong in Europe, where they’re based.

But what if you could find a business heavily concentrated in Europe, which after all is supplying much of the impetus behind the recent acceleration global growth? What if it had a secure base of recurring cash flow underpinning a more cyclical business? And what if the entire company was poised to benefit disproportionately from higher spending on infrastructure projects, privatization on its home turf as well as higher travel volumes?

Well, then it would look a lot like Vinci (OTC: VCISY).

The French concession operator and infrastructure contractor derived 72% of last year’s operating income from public infrastructure concessions. Most of that came from toll roads spanning 2,748 miles, the largest such network in France. Vinci also operates 35 airports around the globe, from Kansai, Japan to Santiago, Chile, Phnom Penh, Cambodia and Lisbon. The company runs some French rail routes, and is leading the consortium that will extend high-speed rail service from Paris to Bordeaux. Vinci manages sports stadiums as well, including Stade de France and Queen Elizabeth Olympic Park. 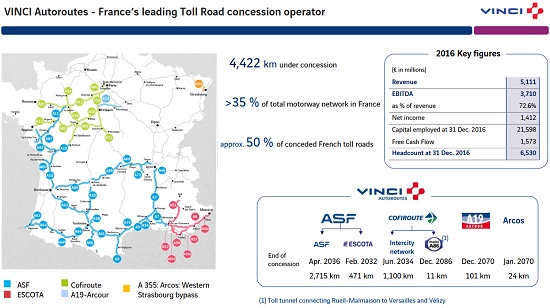 Contracting accounted for 28% of operating earnings last year. That included a unit that supplies, builds and operates energy projects, a general construction business and a division focused on building and paving roads.

While revenue dipped slightly last year as the Bordeaux rail project moves toward completion, the much more important measure of concessions revenue rose 8.5%, and 6.5% excluding acquisitions. Traffic on Vinci roadways increased 3.2% while its airports handled 10% more passengers in 2016, after a 9% increase the prior year.

France accounted for 59% of the revenue and an even larger share of the profits. That’s because the dominant concessions business boasts an operating margin of 48% vs. 3.4% for contracting. And while contracting margins ticked up slightly, those from concessions expanded by nearly three percentage points last year.

The dividend, paid in two installments in November and April, increased 14% from 2015. After the stock’s 33% rally this year the trailing yield is down to 2.3%.

The company has forecast growth in revenue and profits this year at a more moderate pace than it enjoyed in 2016. It should be enough to support another dividend increase.

One obvious catalyst for further growth might be the new French government’s privatization program, which could include its majority stake ADP, the operator of the Charles de Gaulle and Orly airports in Paris. Vinci, which owns 8% of ADP alongside the Netherlands’ Royal Schiphol Group, is reportedly considering a bid for a controlling stake.

Vinci would also be a key beneficiary of the French government’s ambitious infrastructure spending program, which is slated to increase from 2 billion euros a year in recent years to 3.5 billion euros next year and 4 billion euros in 2020.

I’m adding Vinci to the portfolio. And while this shopping trip is done, expect to read about other European bargains down the road.

Hi Igor:
You have very good recommendations. But I do not see Vinci in the portfolio. Your article says you are adding it.
Thanks

Thank you for your kind words. I’ve been under the weather a bit but have now updated the portfolio to include the Vinci recommendation.