A Payout Worth Waiting For

Greetings from the Income Millionaire forward market observation post, where I’m still trying to puzzle out this strange anomaly of pipeline stocks going up.

This looks downright unnatural after five straight losing weeks for the sector but, coming on the heels of a similarly festive Friday, keeps alive hope that the tide has turned.

Certainly energy prices have stopped going down for the moment, and perhaps recent sellers have temporarily tired themselves out. It’s hard work getting out of the way of the impending social collapse that will finally free us from reliance on fossil fuels and related infrastructure. Yes, I’m joking.

The fact that oil inventories have increased in the developed world year-to-date and since OPEC adopted export quotas last fall has been no joke in the energy markets, however. I tend to agree with the International Energy Agency that we’re near an inflection point. But oil traders have heard this tune before, and won’t dance to it until the many tanks filled to the brim with crude actually start to empty. 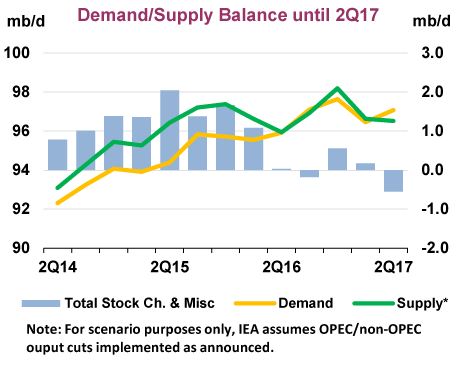 On the other hand, TransCanada (TRP) is actually up 2% since we started keeping score five weeks ago; while Williams (WMB) and Enterprise Products Partners (EPD) are down just 2%, vs. a 6% loss for the Alerian MLP Index. Their resilience reflects strong growth prospects as well as these companies’ larger scale and greater safety margin.

EQT Midstream (EQM) is now down 1% since May 24, and up 5% since sponsor EQT (EQT) unveiled a $6.7 billion buyout of the immediately adjacent rival Rice Energy (RICE) on June 19. The rally fairly reflects EQM’s longer growth runway now that EQT plans to sell it Rice’s midstream assets as well as its own over time.  But the market is still underestimating the potential for faster production growth thanks to the longer laterals that EQT will now be able to drill on its enlarged leaseholds. And those additional production volumes will likely be shipped via EQM’s transit pipes.

At the recent 19% annual distribution growth rate, EQM’s current 4.8% annualized yield will grow to 5.7% in a year and 8% in three. And as one of the lowest-cost producers out there even before considering the efficiencies made possible by Rice’s highly complementary  acreage, EQT is highly likely to sustain its output and EQM’s distribution growth for much longer than three years.

The high prospective yield denotes industry’s considerable risk, including the risk of getting blindsided by the sponsor. Just ask the unitholders of Rice affiliate Rice Midstream Partners (RMP). They too were counting on a fast-growing yield backed by the assets now slated to go to EQM, and their units are down 20% since the merger announcement. As noted in this week’s Income Without Borders, investors in MLPs and similar yield vehicles remain at near total mercy of the sponsor/general partner. Still, EQM’s risk seems particularly worthwhile right now given its long-term upside.

But I admit I’ve only kept one wary eye on energy the last few days while researching European dividend plays. Europe is plainly in the relatively early stages of a big cyclical upswing, and possibly a secular one as well – I’ll have more on that theory next week.

Also next week, I’ll start rolling out additional recommendations for playing that expansion. I’m not satisfied doing so mainly through the small-cap European ETF I’ve already recommended, and would like to tilt the portfolio further toward Europe without taking on too much risk. Stay tuned and unafraid.

Thanks, appreciate the kind words.

We need research on something that’s blood in the streets. I don’t care where it is.

There’s a 13% trailing energy yield in the portfolio if you’re looking for blood, but outside of the energy space I haven’t seen that much distress and even less distress worth buying very recently. That’s just where we are in this market cycle, and that’s OK — I don’t think it makes sense to force anything or to look for names in legitimate trouble in the hope that one of them comes up huge. I’d rather recommend a good REIT or MLP yielding 7% or a dividend payer yielding 3% while piling up free cash flow. It’s OK to be an income investor but to opt for a smaller yield with the greater likelihood of a capital gain.

igor
is it time to dump SNMP?

I wouldn’t. Their 15% yield is fully covered and the midstream volumes are going to be there from a well-financed sponsor.

what do you think about equitable’s GP- EQGP?
seems like a great leverage play

I’ve recommended it in the past and I agree. The Rice deal makes it that much better, but it’s given back most of the pop from the deal announcement; expect to read more about EQGP this week.