How to Hedge Your Bets

Although investment options abounded in the late 1940s, Jones’ fund followed a unique strategy that enhanced returns through leverage and sought to hold both long and short positions. The short plays–bets that a stock would decline in value–smoothed out volatility by reducing downside in weak markets.

This simple but elegant concept ultimately gave rise to one of the most powerful forces in modern finance: the $2 trillion hedge fund industry.

“Hedge fund” is a dirty phrase for many investors. Soured real estate bets made by heavily leveraged funds contributed to the financial panic of 2008, and the collapse of Long-Term Capital Management in the late ‘90s forced the Federal Reserve to orchestrate a bailout.

Given these high-profile debacles, investors often forget that hedge funds were originally designed to reduce, not enhance, market risks.

These days, a wide range of potential risks–from sovereign debt concerns in the EU to a sluggish economic recovery in the US–continue to weigh on investor sentiment.

But the US should dodge the dreaded double-dip recession, and corporate credit markets have returned to health after a tempestuous May and early June. That’s not necessarily cause for celebration. Economic data are consistent with what we’ve predicted in Personal Finance: a subpar recovery from the deep recession of 2007-09.

Elevated unemployment and high levels of household debt have stifled any rebound in consumer spending. And complex legislative reform efforts have reduced visibility in the financial, health care and energy sectors. Meanwhile, governments in the developed world face the challenge of reducing fiscal and monetary stimuli without spooking global markets.

All this uncertainty sets the stage for a period of heightened market volatility that’s likely to persist for years. (See “Ups and Downs.”) Expect more growth scares like the violent selloff in May and June, but take steps to soften the blows from these swings. 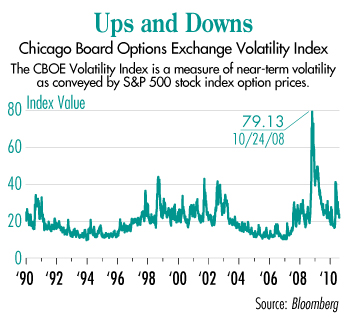 The current expansion is different from the bull markets of the ‘80s and ‘90s; broader market rallies won’t benefit all sectors equally.

Knowing which sectors to avoid will be as important to returns as understanding what to buy. Aggressive investors should take a page out of Alfred Jones’ book by selling the most vulnerable stocks and sectors short.

But households have reprioritized. Although consumer spending began to contribute to economic growth in the third quarter of 2009, the gains have been modest. (See “Spent Consumers.”) Household debt stands at nearly 100 percent of gross domestic product, providing little room to finance consumption. Incomes are on the rise, but consumers are saving much of this additional cash or using it to pay down debt. 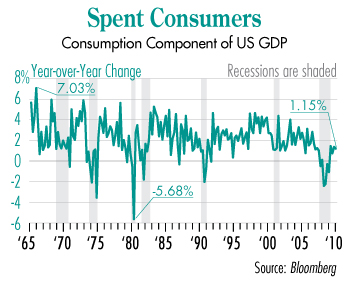 The new frugality has forced many US retailers to rely on aggressive discounting to lure shoppers.

The company’s same-store sales beat expectations in July, but results received a boost from its annual anniversary event. And don’t expect this outperformance to continue; year-over-year comparisons will be tougher in the final months of 2010, when the depressed environment of early 2009 will no longer be in play.

Nordstrom garners about a third of its sales from California and half from the West Coast, regions where the bust in residential housing continues to weigh on consumer spending. Aggressive investors should consider shorting Nordstrom above 29.

But not all consumer-focused stocks are sells.

Better yet, the company offers exposure to rising domestic demand in key emerging markets; in China, sales of its personal-care products jumped 25 percent from a year ago. Rising household incomes in the Middle Kingdom and other emerging markets should continue to drive revenue growth, while the company’s operations in the West provide a solid foundation. Yielding roughly 4 percent, Kimberly-Clark Corp is a buy up to 65.

Avon Products (NYSE: AVP) is another consumer-oriented name worth owning. Although the firm focuses on cosmetics, a discretionary item, about 80 percent of its sales come from outside North America, and half come from emerging markets. Consumers in these regions lack the debt burdens of peers in developed markets.

When Barack Obama was elected President, many pundits pitched stocks levered to alternative energy as a surefire investment. At the time, the new administration appeared committed to passing legislation that would limit greenhouse emissions.

Clean energy and less dependence on foreign oil are noble policy goals, but solar and wind power can’t compete with fossil fuels on cost. In the US the total cost for an onshore wind-power installation is nearly twice that of natural gas-fired plants; solar-power is at least five times more expensive to implement. Even worse, the intermittent nature of wind and solar power would require significant backup capacity to meet power demand.

Extensive government subsidies enable alternative energies to overcome these cost disadvantages. For example, Germany and other European countries have feed-in tariffs that require regulated utilities to pay an above-market rate for renewable energy. Because these higher rates are often guaranteed for 20 years or more, renewable-energy firms enjoy an almost surefire return on their investment.

But the EU gravy train is grinding to a halt. Germany reduced its feed-in tariffs for solar power by as much as 13 percent on July 1, and an additional 3 percent cut is slated for the end of September.

Spain, Italy and France have already passed or are considering reduced subsidies as part of fiscal austerity measures. And lower subsidies are only part of the story; a glut of solar-module manufacturing capacity spells intense competition and falling prices.

US subsidies likely will be extended, but cap-and-trade legislation is dead for the foreseeable future, removing a key upside catalyst.

First Solar reported solid second-quarter results, as companies rushed to install capacity ahead of tariff reductions. But the outlook for demand, prices and profit margins looks grim in 2011. Short First Solar above 110.

Many investors regard gold and shares of gold miners as a hedge against inflation’s ravages; the yellow metal and related stocks were solid performers in the ‘70s and early ‘80s.

But many forget that gold is also a hedge against deflation and financial turmoil. The most recent crisis is a perfect example; gold rallied sharply in late April and May amid concerns about sovereign credit risk in Europe.

Gold is a key element of any well-balanced investment portfolio.

Elliott H. Gue is editor of Personal Finance and The Energy Strategist.