Investing for me is about identifying long-term trends, and then investing in companies whose business I understand, that will benefit from those trends. For more than a decade, my own investment strategy has focused on two major trends: (1) I believe that as the massive demographic of Baby Boomers moves into post-retirement, a tremendous amount of money will flow into the healthcare sector, and (2) oil is generally undervalued.

Because I’m an engineer who has spent my career in the energy sector, it’s probably best if I keep my opinions about specific investments in the healthcare sector to myself. But let’s talk about the oil industry.

The history of the oil industry is one of cycles, which can be seen by looking at the history of crude oil prices. When oil prices are low, oil companies don’t earn as much money, and so they don’t invest as much in new projects. The results in flat production capacity growth until oil prices pick back up. 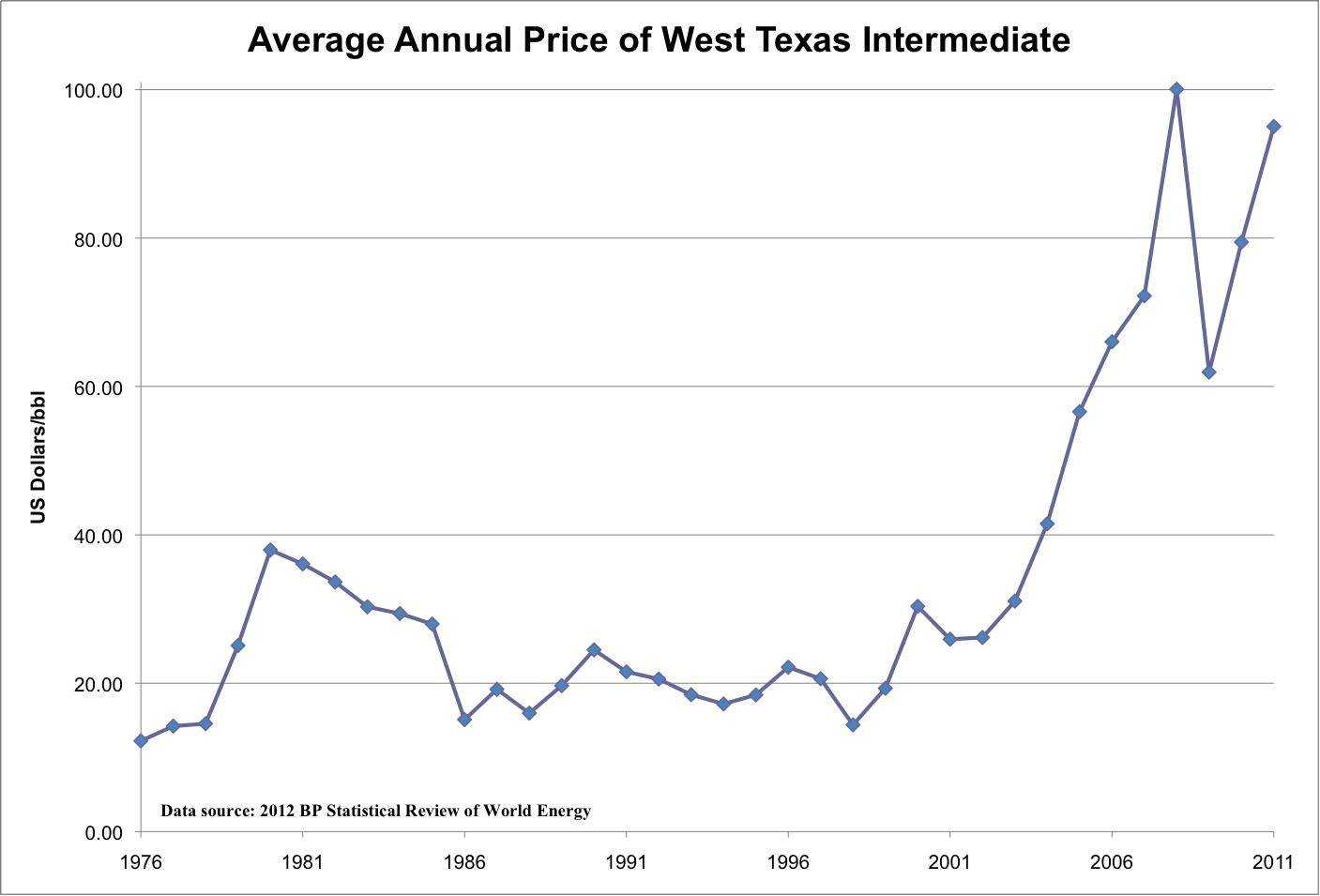 What this means is that when the oil industry isn’t investing as much money into new projects because of low oil prices, demand growth catches up. This results in an erosion of spare capacity, and higher and more volatile oil prices — which sometimes contribute to economic slowdowns. Then high oil prices bring high profits, and lots of money is spent on new projects. Spare capacity swells, and prices once more fall. The cycle repeats.

The cycles don’t occur on a specific time scale, nor are the oil prices top and bottoms consistent. Therefore, analysts spend a lot of time thinking about where we are in a cycle. I would say that during the first half of the last decade, low oil prices led to underinvestment and an erosion of spare capacity. Extremely robust demand growth in developing countries accelerated the depletion of spare capacity, and suddenly the oil industry was no longer able to supply oil at $30. Nor $40, $50 or $60. Oil prices went on an unprecedented climb, which amazingly had little effect on demand growth in developing countries. As the price of Brent crude doubled between 2005 and 2011, oil demand in the US and EU declined by 10 percent. But in China and India, demand continued to grow at a rate of 5 percent per year.

I recently asked John Hofmeister, former President of Shell Oil and currently the head of Citizens for Affordable Energy, if he agrees that loss of spare capacity over the past decade was the primary driver for the strong rise in oil prices? He did agree, and he noted that several developing areas experienced strong demand growth, while OPEC struggled to increase capacity:

“I think that’s the primary reason, without exception. I think the glut that we thought we had back in the late 90’s which resulted in $10 oil in 1998 has been replaced by constant growing global demand, with flat production for the most part to slightly up. But consider China as an example, where in 2005 China needed about 5 million barrels per day of oil; 2011 China needed 10 million bpd of oil; by 2015 China will probably need 15 million bpd of oil. And that kind of tripling of demand in China, augmented by significant additional increases in daily demand from the rest of the developing world, including India and the fact that OPEC has been largely flat in its production and its inability to create spare capacity for most of the last decade, were the primary drivers of oil prices over the past decade.”

The type of projected demand growth from China alone will continue to provide strong demand side pressure on oil prices. Oil production will attempt to rise to the challenge, but Hofmeister further noted that this has been a serious challenge:

“All in all, when you do all the puts and takes, what most of the world does not take time to recognize is that the decline rate of existing fields, which equals 4 to 5 million bpd, means every year just to stay even we need 4 to 5 million new barrels per day of production every year. And if demand grows beyond that we need even more. That’s been the problem. We have not been able to keep up with demand growth and the decline rate simultaneously.”

At some point we are going to enter a new paradigm with respect to the historical oil industry cycles. The price rise of the past 10 years could indicate that we are already there. This paradigm could manifest itself in one of two ways. Global oil production could begin to decline, which would continually erode excess production capacity from the supply side. The result will be higher oil prices – and perhaps much higher oil prices. It is hard to imagine how high oil prices could go in such a circumstance, but the price is probably much higher than most people imagine. Because of high taxes, many countries today pay the equivalent of $300-$400 a barrel for fuel, and yet the roads are still packed with cars. They are mostly smaller cars than we drive in the US, but people drive nonetheless.

But the other way the new paradigm can manifest itself is one that the peak oil camp has mostly overlooked. Imagine a situation where new production can’t come online fast enough to meet new demand. In this case, production could still grow – meaning that it isn’t peak oil – but the loss of spare capacity would also manifest itself as much higher prices. This is the case I call “peak lite.” It is not actually peak oil, but it has some of the same symptoms: not enough oil to meet demand at a specific price, so the price has to rise.

In my opinion, this phenomenon is the real driver of oil prices that began the climb from $25/bbl in 2002 to over $100/bbl in 2008. This can also be thought of in relation to peak oil. Peak lite effectively means “peak oil as a function of price.” This is also something I think peak oilers largely overlooked – the extent to which oil production is a function of price. But the very reason oil production in the US is climbing is that high oil prices have made more oil production plays economical. If oil prices were still $25/bbl, then no doubt oil production would be much lower than it is today, and it would be declining. In other words, we have almost certain passed “peak $25 oil.” Deepwater oil and oil from tight formations wouldn’t continue to expand if oil prices were depressed. But that’s the beauty of economics: Declining production of $25 oil sent oil prices soaring, and production responded.

There is certainly a limit as to how much the world will pay for oil. But consider the energy value of a barrel of oil. A barrel of oil contains about 5.8 million BTUs. A trained cyclist can sustain an output of about 300 watts over the course of an hour. In order to generate as much energy as is contained in that barrel of oil would take the cyclist 5,700 hours of pedaling. If you could find someone to pedal for minimum wage, that still equates to $41,000 worth of human labor contained in a barrel of oil.

Of course nobody is ever going to pay tens of thousands of dollars for a barrel of oil. We couldn’t afford to, and many alternatives would become economical long before we reached that point. This is only to illustrate what a bargain oil actually is — even at $100/bbl.

You may be asking what any of this has to do with investing. First, I don’t believe there are any scalable and economic replacements for oil at even $150/bbl. There are some niche replacements, but nothing that will displace millions of barrels of oil per day. So the longer term trend still favors higher oil prices in my view.

However, we may still have one or two more cycles of boom and bust before we truly enter the new paradigm I have described here. The busts won’t take oil back down to $25, but it could drift down somewhat from here until demand catches back up. Investors have to be aware of the risks of a slight pullback this year, and invest accordingly. This portion of the cycle is not a place where investors want to be particularly aggressive.

In this week’s issue of The Energy Strategist, I will discuss some of the drivers on the horizon that will start to drive oil prices higher — particularly West Texas Intermediate — over the next 2 to 3 years. I will also discuss the companies that stand to benefit.