The latest YieldCo spinoffs continue to underwhelm, much like their recent predecessors. And the small size of these companies could eventually make them more akin to “RiskCos,” since they’ll ultimately need to compete against much larger firms.

While YieldCos do initially offer enticing yields, as their name suggests, investor enthusiasm has pushed prices for these securities higher, resulting in a situation where many YieldCo stocks currently yield less than those of larger, more stable utilities.

Utilities created YieldCos as investment vehicles for operating assets that generate steady, low-risk cash flows, particularly from renewables, since current law precludes them from being dropped down into a master limited partnership (MLP).

But YieldCos don’t offer the same tax-deferral benefits as MLPs since their payouts are generally taxed as dividends.

Furthermore, while MLPs enjoy minimal taxation at the corporate level, YieldCos will only be shielded from taxation at the company level for the initial five- to 10-year period during which their net operating loss carryforwards can be used to offset taxable income.

So with one or two exceptions, I’ve concluded that most income investors should probably steer clear of YieldCos.

But their allure has grabbed headlines once again, with First Solar Inc’s (NSDQ: FSLR) decision in early November to abandon its plan to develop a YieldCo, a reversal that sparked a sharp selloff in the company’s stock.

At the time, First Solar CEO James A. Hughes said he believed the firm was not “missing either gross margin opportunities or market share capture opportunities because we don’t have a YieldCo today.”

We’re inclined to support Mr. Hughes’ decision because long-term contracted assets typically provide a level of diversification and safety for companies while they pursue new business opportunities that can incur greater risk.

In other words, it’s prudent for most companies to keep steady, income-producing assets in house, rather than carve them out for short-term gains from financial engineering.

Nevertheless, First Solar has paid a hard price for its stance, and the company’s shares are now down 17.5% from their close prior to the announcement.

Though conspiracy theories always abound at finance conferences, the buzz at the Edison Electric Institute Financial Conference, an event I attended last month where the investment community meets with energy companies, was that First Solar was being made an example.

Certainly, when I met with Mr. Hughes at the conference, he seemed as perplexed as I was about the stock’s selloff.

After all, as Mr. Hughes pointed out, the firm has a more extensive pipeline of projects than in years past. And from surveying some of my contacts among utility executives, First Solar is one of the most well-regarded solar developers in the utilities space.

I do hope that what First Solar has suffered does not dissuade other CEOs from saying no to developing what, at this point, seems like a faddish investment. Because the problem with YieldCos could be fixed if Wall Street and some corporate chieftains would just pay closer attention to what investors actually want. 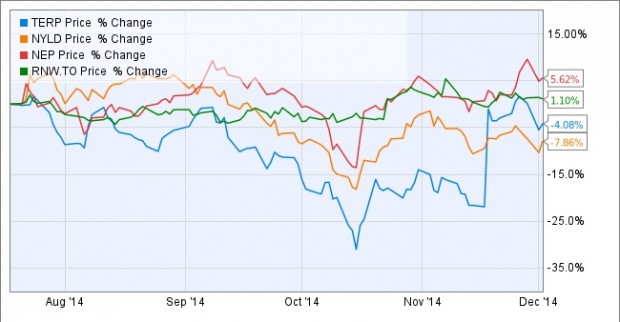 Although some in the power industry clearly hope to unlock greater value from dependable, income-producing assets, just as has been done with MLPs, no company wants to do this at the price of putting the parent company at risk, or by creating a risky subsidiary that could fail.

Therefore, YieldCos must be developed with sufficient size and scale to rival electric utilities or super MLPs.

Size is important here because while YieldCos can rely to some extent on asset drop-downs from their parent companies, they will eventually have to compete for new income-producing assets against larger, better-capitalized energy firms.

And YieldCos–like MLPS–must be given similar tax benefits along with the corresponding obligation to pay most or all of their distributable cash flow to shareholders.

While some argue that not having this obligation affords firms greater financial flexibility, I believe such a rule would enforce discipline on management teams to remain focused on income-producing assets.

As they’re structured presently, YieldCos also have significant governance risk. For example, according to a report by Moody’s Investors Service, many YieldCo senior officers hold similar positions at their parent companies.

As I’ve written in the past, non-arms-length transactions can be a recipe for disaster, given examples from the recent past where parent companies negotiated advantageous agreements at the expense of subsidiaries. In some cases, the parent company even dumped non-performing assets into a subsidiary or off-balance sheet partnership to improve the optics of the legacy company’s financials.

The question here is how to know whether the YieldCo is getting a good deal on an asset, when the parent company’s management team essentially controls the terms on both sides. To ensure such deals are better aligned with shareholder interests, investors should demand that YieldCos have their own independent management teams.

Of course, I’m probably wasting my time in proposing such improvements, even if they help illuminate YieldCos’ shortcomings.

After all, some of the more cynical analysts believe that YieldCos are nothing more than vehicles to enrich corporate management teams and earn fees for investment banks at the expense of investors.

That’s at least somewhat evidenced by the skeptical tone in a recent report from Moody’s entitled “FAQ: Global Credit Implications of YieldCos.”

Though the bond-rating agency acknowledges there is a rational argument for YieldCos attracting premium valuations, they doubt such premiums will persist over the long term because the current YieldCo structure can only support several years of dividend growth.

Moody’s says that of the three ways that YieldCos could theoretically sustain dividend growth, the only one that’s feasible over the long term is acquiring new assets through the judicious use of debt.

And when growth inevitably slows and valuations fall, YieldCos will no longer offer companies a cheap way to raise capital, and their appeal will largely wane among investors and utilities alike.

But give the power industry another five to 10 years, and it will eventually come up with another faddish spinoff strategy to raise easy money from existing assets, just as it’s done previously.

Subscribers to Utility Forecaster receive the full update, which lists those companies best positioned to benefit from the YieldCo trend.