When compiling a list of the best coffee stocks to own, Starbucks (NSDQ: SBUX) is usually the first name that comes to mind. And for good reason; Starbucks is the largest publicly traded coffee retailer in the world. With a market value of $80 billion and one of its ubiquitous stores seemingly on every corner, you might think Starbucks is the only coffee company worth owning.

To be sure, Starbucks is a wonderful company and rightfully deserves credit for popularizing the retail coffee business in America. But its future growth has become more dependent on Southeast Asia than the United States. Starbucks will be dealing with cultural differences that might not be a good fit with its formulaic growth plan.

For that reason, we believe the best coffee stocks to own in 2019 are diversified companies that are still on the steep end of the growth curve. They may not be as well-known as Starbucks, but they are more nimble and able to grow profits at a faster rate.

How Do You Determine What Qualifies as the Best Coffee Stocks to Own in 2019?

Until recently, coffee was primarily a high-volume, low-margin business. Under that scenario, keeping distribution costs low is the key to profitability. A lot of retail chains still operate under that model, buying their coffee wholesale from the lowest cost supplier.

At the opposite end of the spectrum are high-end retailers that offer consumers an “experience” along with their daily cup of joe. They buy their beans from trusted suppliers under long-term contracts. According to the National Coffee Association, 2017 was the first year that over half the coffee consumed in North America was gourmet.

We believe both ways of doing business can be successful and have identified three companies that excel under either model. As with any other business, the best coffee stocks to own in 2019 will be those that can grow revenue while keeping costs under control.

What are the Best Coffee Stocks to Own in 2019?

If you’re in a hurry, below are our picks for the best coffee stocks to buy now.

Keep reading to find out more about each of the best coffee stocks to own in 2019.

Dunkin’ Brands, headquartered near Boston, Massachusetts, is the parent company of Dunkin’ Donuts and Baskin-Robbins. With a stock market value of less than $6 billion, Dunkin’ is tiny compared to Starbucks, which is valued at nearly $80 billion.

Dunkin’ Donuts is a beloved icon in the company’s home base of New England, providing the company with a rock-solid source of steady sales in the region. The company’s blue-collar roots in the Bay State were spoofed in this Saturday Night Live skit, which provides lots of laughs but also underscores the entrenched cultural significance of the Dunkin’ brand.

In truth, Dunkin’ offers its customers a hot cup of coffee, warm donuts, and cold ice cream in its unpretentious eateries located primarily in strip malls. It’s a simple formula, but it works. Over the past three years, DNKN gained 56%, more than double the return of the overall stock market.

In 2017, Dunkin’s 9,000 stores served over 5 billion cups of coffee, contributing to $85 billion in sales. However, unlike Starbucks, which has fully penetrated the U.S. market, Dunkin’ still has plenty of room to grow. The company intends to open 1,000 net new stores by 2020 outside of the Northeast region.

In addition, Dunkin’ revised its menu in 2018 to eliminate slow-moving, low-margin products to leverage its existing store locations. The combined effect of more stores and wider profit margins should juice earnings in 2019 and beyond.

As its name implies, Keurig Dr Pepper is the result of a recent merger between two popular beverage brands. Until 2018, Keurig was affiliated with Green Mountain Coffee Roasters. It was spun off and combined with Dr Pepper Snapple and began trading as an independent entity less than a year ago.

Keurig is famous for its individual gourmet serving pods that come in a variety of flavors. Its unique process eliminates the time-consuming chore of grinding and filter coffee. Instead, you simply insert the pod into a Keurig maker and punch the seal of the pod.

Although Keurig Dr Pepper has a stock market value of nearly $40 billion, it is unknown to many investors since it is so new. For that reason, there hasn’t been much data for analysts to evaluate. However, we believe it will receive increased attention in 2019 as each new set of quarterly results exceed expectations.

More so than other beverage companies, KDP is targeting its marketing efforts squarely at millennials. These younger consumers are willing to pay for a better tasting cup of coffee made with natural ingredients. As proof, traditional beverage retailers experienced flat to negative growth in 2017 while KDP grew its sales by more than 2%.

You’ve probably had coffee made by the Coffee Holding Company, but you may not recognize its name. That’s because most of its products are marketed under another name. JVA sells nearly 100 varieties of coffee beans though supermarkets, coffee shops, and wholesalers.

The other reason you have not heard of JVA is its small size. With a stock market capitalization of only $25 million, JVA is considered a “micro-cap” stock that is too small to warrant coverage from the mainstream financial media. In fact, only one Wall Street investment banking firm follows JVA, and it seldom issues an update on the company.

Micro-cap stocks offer the potential for exponential growth. But as we’re witnessing in the marijuana boom, they also can confer outsized risk.

Read This Story: Our Eco Science Solutions Stock Prediction In 2019 (Buy or Sell?) 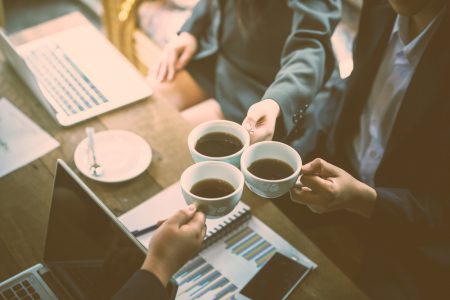 Since JVA operates a low-margin business, increasing volume is the key to growing profits. During the third quarter of 2018, JVA increased sales by 30%. However, the company reported no profit for that quarter due to one-time expenses related to the acquisition of a competitor, Steep & Brew.

For that reason, we expect earnings to improve markedly in 2019 as the revenue from Steep & Brew starts showing up in the bottom line. Once that happens, JVA will begin attracting more attention from industry analysts. We believe JVA may eventually become a takeover target by a private equity firm. In that case, current shareholders would be bought out at a premium to market value.