What The Investment Herd Is Missing

I started my publishing career as a reporter on daily metropolitan newspapers, before the advent of the Internet, smartphones and laptops. Back then, I relied on a landline telephone, a spiral notebook and shoe leather.

I was trained to be skeptical. An editor in the newsroom once told me: “The only way to look at a politician is down.”

I’ve retained the same mindset. In today’s high tech (and highly partisan) era, I wear only one label: contrarian. As an investment advisor, I strive to get the story behind the story.

Below, I’ll give you my latest insights into market behavior, with specific trading advice. We’ve witnessed a volatile week and more of the same probably lies ahead. First, a quick word from the Oracle of Omaha.

Mr. Buffett and the herd mentality…

Investors who don’t think for themselves are sheep. And sheep get slaughtered.

Heed the following guidance of Warren Buffett. I know financial writers love to quote Warren Buffett, but hey, the guy is worth $81 billion, so he must know a thing or two. Buffett once said:

“You need to divorce your mind from the crowd. The herd mentality causes all these IQ’s to become paralyzed. I don’t think investors are now acting more intelligently, despite the intelligence. Smart doesn’t always equal rational. To be a successful investor you must divorce yourself from the fears and greed of the people around you, although it is almost impossible.”

Buffett-type contrarianism is a guiding principle of Mind Over Markets. Despite the increasing prevalence of algorithmic trading, markets are still governed by human beings, who in turn are driven by fear, greed and other emotions that cloud judgment. If there’s a common thread to my daily column, it’s to buck the conventional wisdom.

Fact is, average investors tend to buy and sell at the wrong times. Market tops make them “feel good,” prompting them to pile in when valuations are too high. You need to keep an eye on the long-term horizon, not short-term theatrics.

Which brings me to the “trade deal” between the U.S. and China that was announced with great fanfare Friday. Investors were thrilled, pushing stocks sharply higher. The major indices closed the week with a three-day winning streak, defying the consensus warning of a correction (see chart).

Stocks of companies with heavy exposure to China, especially manufacturers, soared on Friday. The S&P 500 now hovers near a record high, despite an extremely volatile past quarter during which sputtering global growth and escalating trade tensions fueled recession fears. Investors have been whipsawed by ups and downs in the Sino-American trade war, with stocks rising and falling on the whims of trade negotiators.

Friday’s market euphoria was sparked by news that both sides seek a “phased” approach to a trade deal. The agreement shelved a tariff increase scheduled for this week, providing a temporary truce in the trade war that has been unfolding since January 2018.

President Trump said negotiators had achieved a “Phase 1” deal that would take several weeks to write. Both sides plan to officially sign the deal sometime in November.

If it comes to fruition, the agreement would provide relief to U.S. farmers and businesses that have been hurt by the trade war. China would buy $40 billion to $50 billion worth of American agricultural products every year, in return for guidelines on how it manages its national currency, the renminbi (aka yuan). A major White House accusation against China is that the country manipulates its currency to keep it artificially low, which in turn makes the country’s products cheaper.

In exchange for all this, the United States will not move ahead this week with plans to hike tariffs on $250 billion worth of Chinese goods to 30%.

Less than meets the eye…

I hate to be the skunk at the garden party, but this deal seems pretty weak to me. Television news anchors are hyperventilating that it’s a breakthrough, but I wouldn’t pin too many hopes on it.

Crucial sticking points such as intellectual property, technology transfers and enforcement are quite complex and it’s unlikely they can be resolved in just a few weeks. Here’s a fact that Wall Street seems to forget: the existing multilateral trading system implemented in the wake of World War II required decades of painstaking negotiations and compromises.

For nearly two years, a wrecking ball has been applied to this global trading system. It’s hard to see how a few friendly words at a press conference, designed to appease investors, can fix the damage in time for a November signing. Talk is cheap.

Unaffected is an additional round of U.S. tariffs that the White House has threatened to implement on Dec. 15. What’s worse, nothing was said about the substantial and ruinous tariffs already in place.

I should also point out that the increase in Chinese purchases of U.S. farm products that is being touted as the biggest victory for the U.S. in the agreement unveiled Friday is one that was first offered by Beijing more than two years ago.

We’re witnessing a lot of self-congratulation right now in Washington. It’s as if an arsonist set a house on fire and then called himself a hero because he threw a bucket water on the flames. As for Beijing, it’s my contention that Chinese leaders are merely stalling and waiting for a new occupant in the White House.

Take a hard look at the hard data…

I contend that trade tensions will continue to cause extreme volatility, all the way up to the 2020 election. The stock market’s long-term direction remains largely contingent on the state of economy, which in turn has been getting battered by tariffs.

The important economic reports to watch in the week ahead include retail sales on Wednesday, and jobless claims and industrial production on Thursday (see table; no reports are scheduled for today’s Columbus Day holiday): 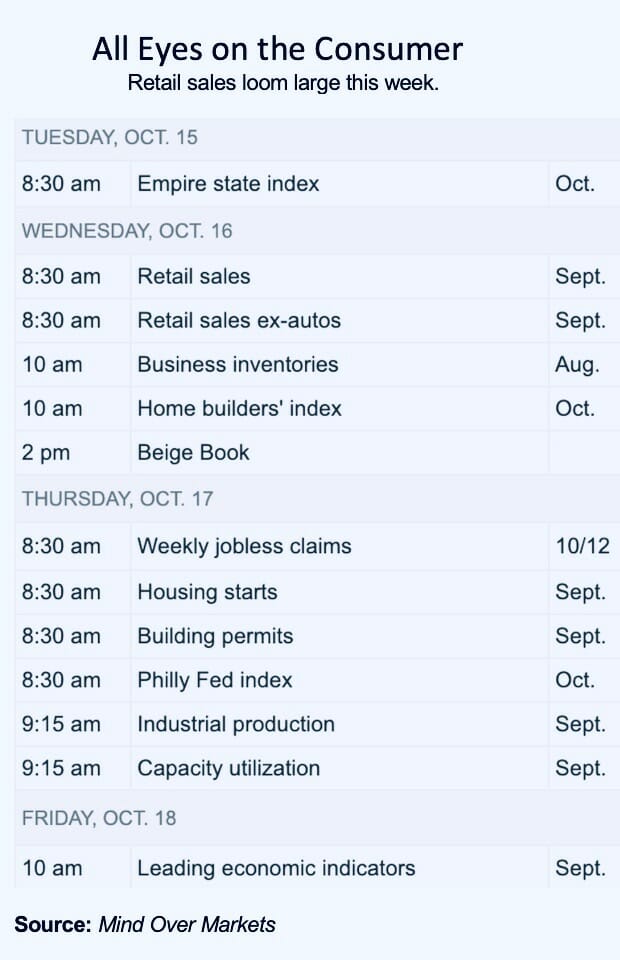 Pay particular attention to retail sales. Consumer spending has been the backbone of the economic expansion and bull market. Another positive factor has been the Federal Reserve’s dovish pivot on monetary policy.

The government’s industrial production report on Thursday will show real output in the manufacturing, mining, electric and gas industries. If the data reveal weakness, it will heighten recession fears and weigh on stocks.

Factory activity already is sputtering. The Institute of Supply Management’s manufacturing index dropped to 47.8 in September, down from 49.1 in August, the lowest number in more than a decade. Any number above 50 indicates manufacturing expansion; a number below 50 indicates contraction.

The upshot: Enjoy the protracted bull market, but tread carefully. Gravitate toward value and defensive sectors. Now’s a good time to pocket at least partial gains from your biggest winners; overvalued large-cap tech stocks are good candidates. Elevate the cash level in your portfolio to at least 15%.

I’m especially bullish on utilities and real estate right now. For our latest recommendations in the utility sector, click here for a special report.

For a compelling money-making opportunity in the real estate sector that most investors don’t even know about, click here for details.

You should also tap into trends that boast sustainable multi-year momentum, regardless of economic cycles or trade war headlines. One such trend is the evolution of marijuana from illegal pastime to consumer mainstream. Click here to discover little-known ways to reap big profits from marijuana legalization.

Gold prices have rallied lately and the yellow metal should continue its upward momentum, as international military tensions, especially in the Middle East, get worse. Every portfolio should hold at least 5%-10% in precious metals, as a hedge.

Stay invested. Despite mounting risks, plenty of opportunities still exist to make money. Above all, remain contrarian in your thinking.

During my early days as a newspaperman, we had a motto in the newsroom: “If your mother says she loves you, check it out.” In other words, take nothing at face value and dig for the facts. Those are wise words to invest by.

Questions or comments? Drop me a line: mailbag@investingdaily.com.