According to a new study released February 16 by the cannabis company Leafly, the marijuana industry added more than 77,000 jobs over the past year, a 32% increase that makes the sector the fastest in job creation compared to any other American industry.

The marijuana industry’s year-over-year job growth is remarkable, occurring in the worst year for U.S. economic growth since World War II. The overall American economy contracted by 3.5% in 2020, the unemployment rate almost doubled, and nearly 10 million Americans lost their jobs. But through it all, marijuana companies prospered and their stocks soared.

The marijuana sector is currently home to about 321,000 full-time jobs, across 37 states that have legalized the plant to some degree. The Leafly report underscores a widespread, bipartisan argument in favor of reform: legalizing and regulating cannabis conveys huge economic benefits.

Since 2017, the U.S. marijuana industry has averaged annual job growth of 27.5% every year. No other industry even comes close to this rate of job creation.

In 2020, Americans bought $18.3 billion worth of marijuana products, a 71% increase over 2019. New consumers of recreational and medical marijuana, and the spread of legalization among the states, propelled much of the marijuana surge in 2020. But another catalyst for growth was an increase in the average purchase size of established consumers, who boosted their average monthly spend by 33%.

The upshot: Legal marijuana is a jobs generating machine in both the recreational and medical sectors, further proof that the industry and its publicly traded companies have staying power.

New Jersey gets its act together…

In other marijuana news, recreational marijuana will finally become legal in New Jersey under three bills signed by Gov. Phil Murphy (D) on February 22, more than three months after voters approved legalization by a two-to-one margin in the November 3 elections.

New Jersey voters approved a legalization referendum in November, but disagreements between lawmakers and the governor over procedural details had impeded enactment. Monday’s bill signing resolved most of those details (see Murphy’s February 24 tweet). 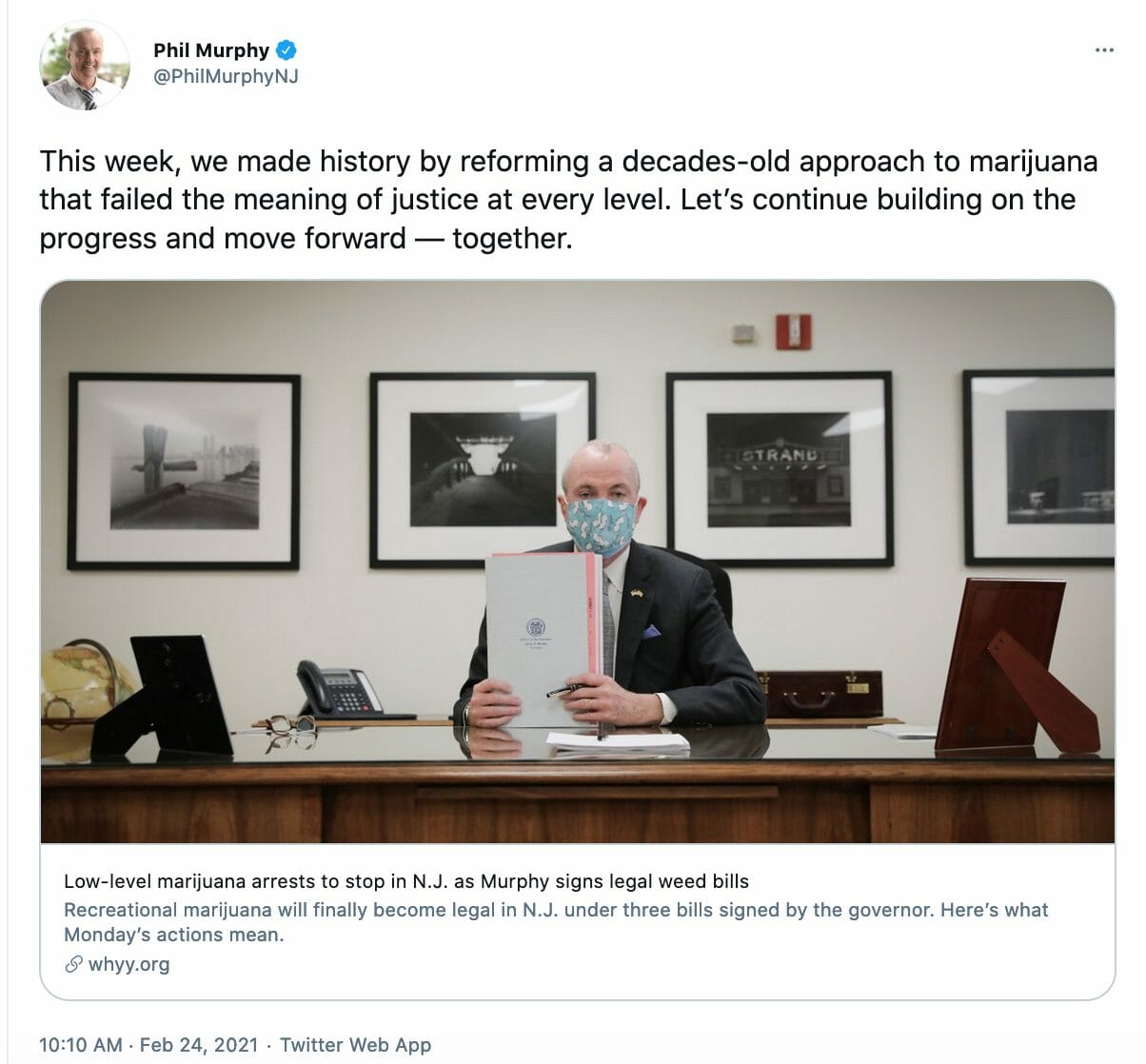 Monday’s actions compel the police to immediately stop making arrests for small amounts of marijuana possession. However, New Jersey residents likely won’t be able to buy weed from a dispensary for “plus or minus six months,” Murphy noted, as state regulators start the process of establishing the legal marketplace and granting licenses.

During his campaign for governor, Murphy promised that he would support marijuana legalization, in large part for social justice reasons.

“New Jersey’s broken and indefensible marijuana laws, which permanently stained the records of many residents and short-circuited their futures, and which disproportionately hurt communities of color and failed the meaning of justice at every level, social or otherwise, are no more,” Murphy said.

The governor also cited the marijuana industry’s proven ability to generate jobs (and tax revenue) as important justifications for making weed legal in the Garden State.

Looking for the best way to make money from the mainstreaming of marijuana? A small group of everyday Americans are earning up to $55,362 a year from one company’s unique marijuana profit-sharing “program.”

As lawmakers such as Gov. Murphy embrace marijuana legalization, this company’s prospects are on the fast track for growth. To join the profitable action, click here.